I have a new pond dip site that is very rich in microorganisms. It is a water hazard on a very nice (and expensive green fees) golf course that was shut down a few years ago. The golf course was in the same development as the Olympus headquarters and Bank of America announced that they were going to put a huge data processing center on the site of the golf course, which had been corn fields. The club closed and they auctioned off everything -- even the greens.
The water hazard had a fountain to aerate it, but the ponds has since been left on its own and has stabilized into a rich self-contained ecosystem that supports fish such as perch and blue gills.
I've found lots of desmids (many forms of Micrasterias), protists, larva, nematodes, worms and some huge brown Hydra. Unfortunately, the pond dips only support some of the larger organisms for about a week in a jar and then they go rancid.
Here is an interesting desmid from a stack of 10 shots. 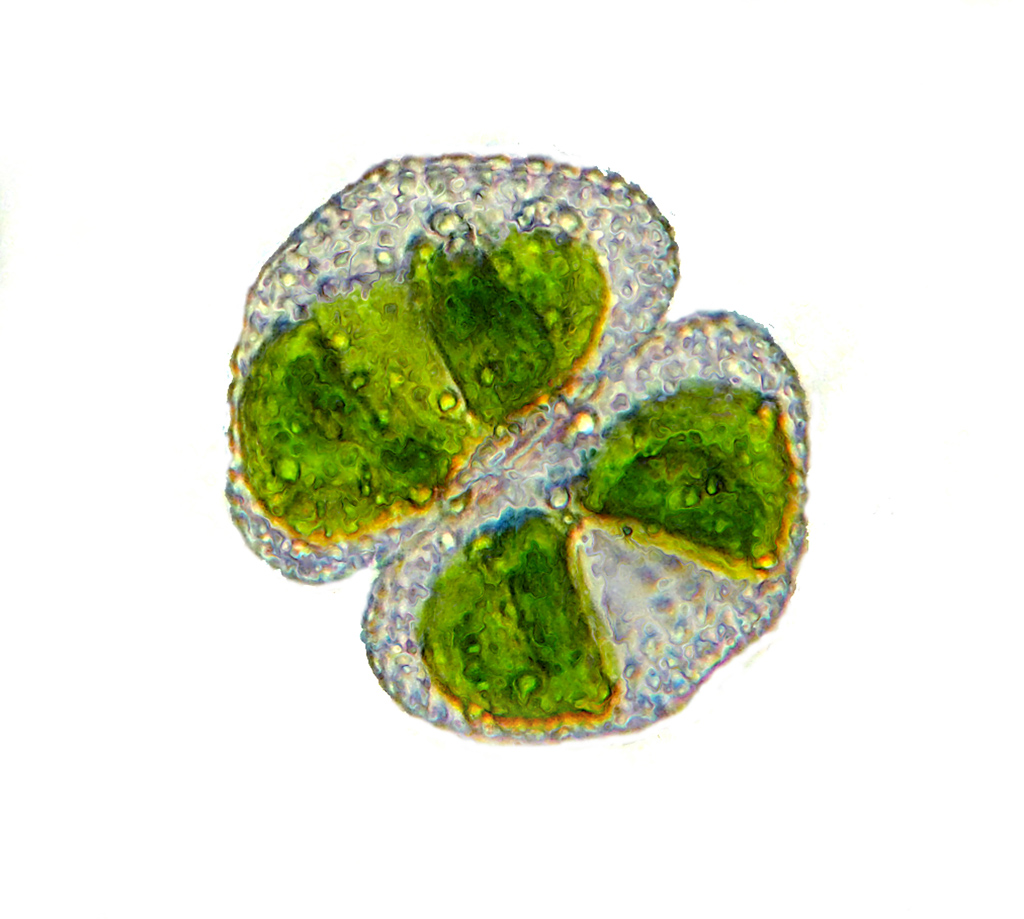 Can anybody recommend a well-illustrated book for identifying algae and desmids? I have the classic How to Know the Protozoa.
Thanks
Michael Reese Much FRMS EMS Bethlehem, Pennsylvania, USA
Top

I'm looking for the the extemely rare V-IM magnification changer for the E800 scope. If you have seen a listing or have one for sale please let me know.
Top

Thanks Litonotus. After you identified it I Googled Cosmarium and found this awesome gallery.

A very good, profusely illustrated scientific guide is Freshwater Algae by H.Canter-Lund and J.W.G. Lund. Published in 1995 by Biopress Limited, Bristol, England. The ISBN is 0-948737-25-5

The authors are Honorary Research Fellows of the Freshwater Biological Association, Britain's leading research body in its field.
Top

Although the taxonomy is very out of date, there are two very good monographs available for download on the Biodiversity Heritage Library.

"Desmids of the United States and list of American pediastrums with eleven hundred illustrations on fifty-three colored plates. By the Rev. Francis Wolle" is available at http://www.biodiversitylibrary.org/bibl ... 6#/summary and "A monograph of the British Desmidiaceæ, by W. West and G. S. West" is available at http://www.biodiversitylibrary.org/bibl ... 9#/summary .

Although one is British and one is American, the desmids are failrly cosmopolitan, so it is worth looking at both books - after all, they are free.

Desmids of the United States

I purchased the facsimilie of Desmids of the United States from the Univeristy of Michigan press in paperback from Amazon. DO NOT BUY THIS. The plates are of such poor resolution from the original engravings that for the most part they are useless. All the Closterium look the same and there is very little detail in all of the plates. The bibliography runs 160 pages. A very disappointing purchase.
Michael Reese Much FRMS EMS Bethlehem, Pennsylvania, USA
Top

Desmis of the United Sates

After reviewing the .pdf of Desmids of the United States I've decided to print out the plates to 8 1/2 by 11. That only comes to about 130 pages. Almost half of the pages in the plates section are blanks, probbaly vellum interleaves. The nice thing, is when I print on two sides, the legend pages will face their repsective plates in the ring binder.
Michael Reese Much FRMS EMS Bethlehem, Pennsylvania, USA
Top
Post Reply Previous topicNext topic
7 posts • Page 1 of 1