Thoughts on mysterious inclusion in meteorite

Thoughts on mysterious inclusion in meteorite

Just a thought or two having looked at Bruce's interesting images at http://www.photomacrography.net/forum/v ... php?t=1920. I have seen a similar type of structure in a completely different context. Compare the following: 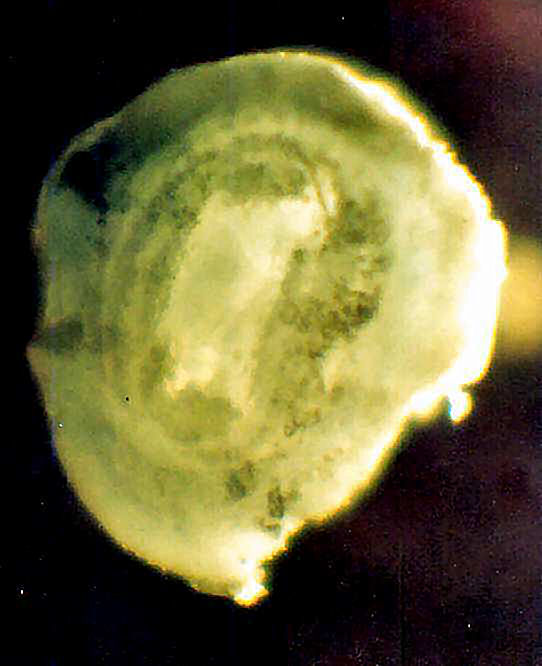 This is in fact a section through a pharmaceutical pellet of the sort you sometimes find in capsules. It is an old scanned image from a polaroid photomicrograph taken through a Projectina microscope and not of the best quality, but I think it illustrates what I have in mind. It struck me that there may be a structural similarity and indeed possibly similarities in the method of formation.

This type of pellet starts with a seed crystal, or non-pareil. Several kilos would be placed in a rotating pan, not unlike a cement mixer. Then, small quantities of sugar syrup, or other suspensions containing a binding agent are applied to the pellets, with hot air being used for drying. Slowly, layers are built up around the central seed and eventually the coating pan will contain many, many small spheroidal pellets. You can see the onion-layer type of structure in the pellet cross section. Alernatively, the seeds may be suspended in a stream of air (a "fluid bed") and coatings applied by means of spraying.

It seems to me that the meteoric inclusion has a rather similar structure and may well have been formed around a seed crystal and then the "pellet" itself ended up as an inclusion in a larger body.
Graham

A very striking example and a most wonderful possibility as to the formation of Bruces meteor anomaly. A great bit of investigative researching there Graham.

A very interesting hypothesis - thanks Graham.

I don't have a scientific background, however I would agree with you that there would appear to be a strong parallel between the manufacturing process you have outlined and the early formation of this type of stony meteorite.

NWA788 has been classified as a type L6 chondrite which means that it is composed of ~90% silicate plus 5% to 10% nickel-iron metal alloy (plus some other bibs and bobs). The exact chemical/physical make up of NWA788 is recorded somewhere - but unfortunately I couldn't locate it

It's generally accepted that these stony meteorites accreted from the hot material in the solar nebular pretty much at the same time as our sun and solar system - and has remained (largely*) unchanged over the intervening 4.55 billion years. Now as you have suggested, on a hugely grander scale, that process of accretion (planets, asteroids and meteorites) sounds remarkably similar to the production process of pharmaceutical pellets.

*Some meteorites would have started out life as part of a large or small asteroid and through (perhaps repeated) collisions eventually fragment into meteorites.

...and yes there is a similarity between my meteorite image and your section through a pharmaceutical pellet.