By the end of October, the cyanobacteria shown here had formed a yellow-colored coating on the surface of a small pond, which closely resembled the coatings formed by large amounts of pine pollen during springtime. The small cells, which were embedded in a gelatinous matrix, belong to a cyanobacterial genus unknown to me. The filamentous cyanobacteria most likely belong to the genus Anabaena. The bottom photograph shows a part of an Anabaena-filament with one heterocyst (H) and one akinete or endospore (E). The Anabaena-filament is surrounded by a gelatinous mucilage (G), which is hard to discern.
Heterocysts are characterized by their hyaline protoplasm and the absence of granular reserve materials. They are cells specialized for the fixation of gaseous nitrogen from the atmosphere. Since nitrogen fixation requires anaerobic conditions, heterocysts lack photosynthetic pigments and the oxygen-evolving component of the photosynthetic apparatus. Instead, herterocysts are characterized by a thick cell wall, which is even thicker at both ends of the cell, where it projects into the cell interior, forming the polar nodules. Akinetes are large thick-walled cells filled with reserve material, which allow the alga to survive periods of unfavourable environmental conditions.
The Anabaena-cells shown here have most likely formed gas vacuoles, which would explain their unusual coloration and their highly refractile interior. The filamentous cells have a width of about 10 µm. The endospore is about 22 µm long and 13 µm wide. 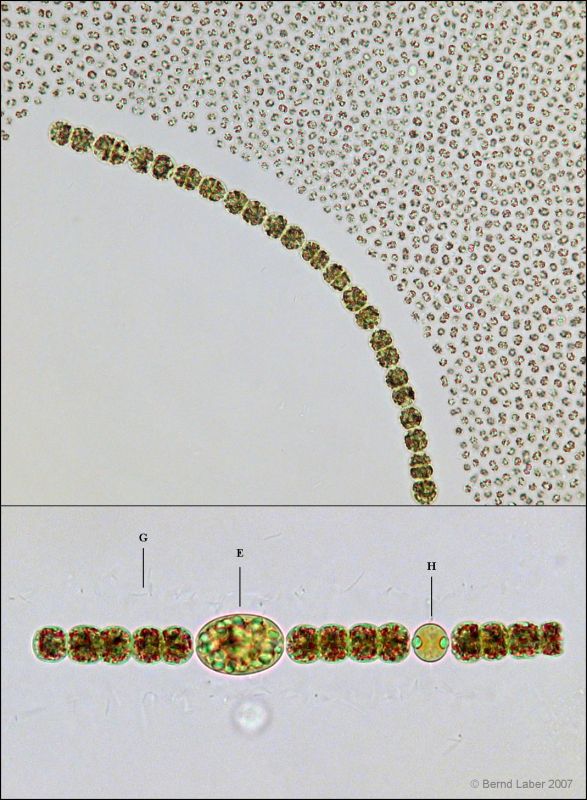 All photographs were taken with a Canon Powershot G5 camera, either through an Epiplan-Neofluar 10x/0,30 (top) or a Plan-Neofluar 40x/0,75 objective (bottom) attached to a Zeiss Axioskop, using brightfield illumination.

Some great details in this cyano Bernd, probably the best image I have seen of one of these organisms in quite some time. Usually when I find them, they are in with some filamentous algae such as Spirogyra. A very good and detailed image.

The first picture shows the gelatinous matrix very well and you can just bearly see it in the second picture.....and thank you for all the great information also, I will be searching for some of these scientific words on the net.

Excellent images, Bernd, and I really appreciate the annotation and detailed explanation. Thanks!