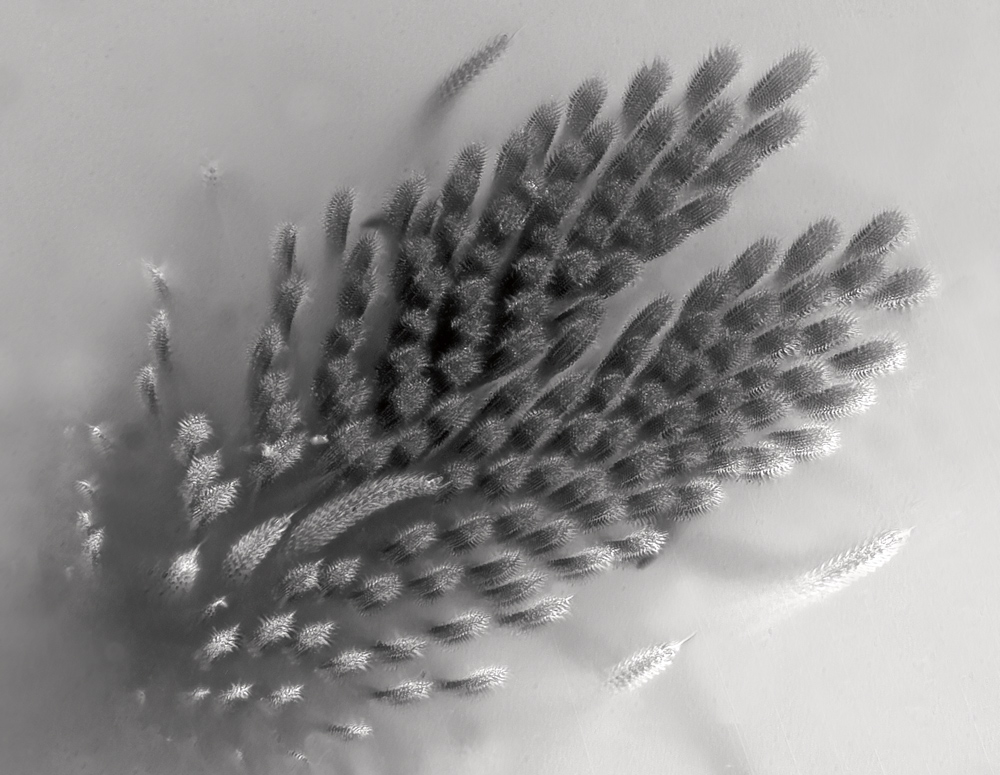 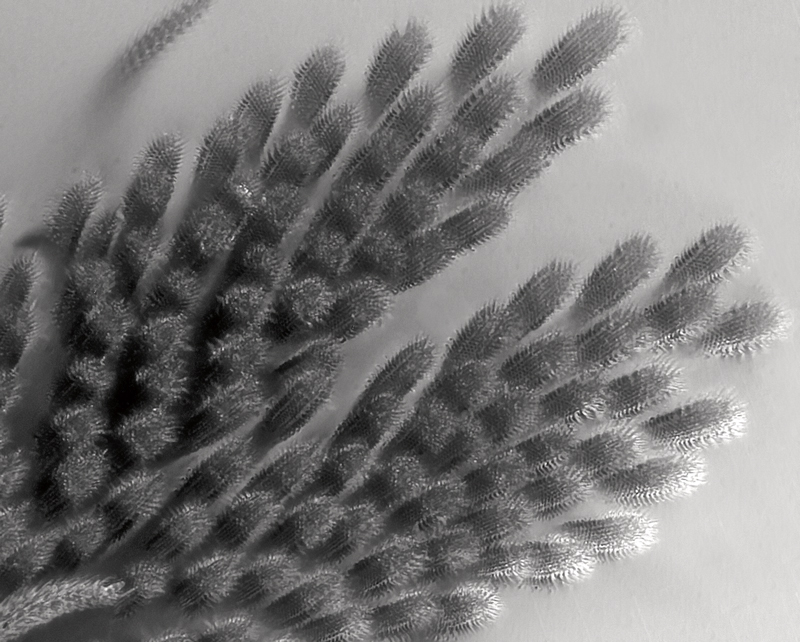 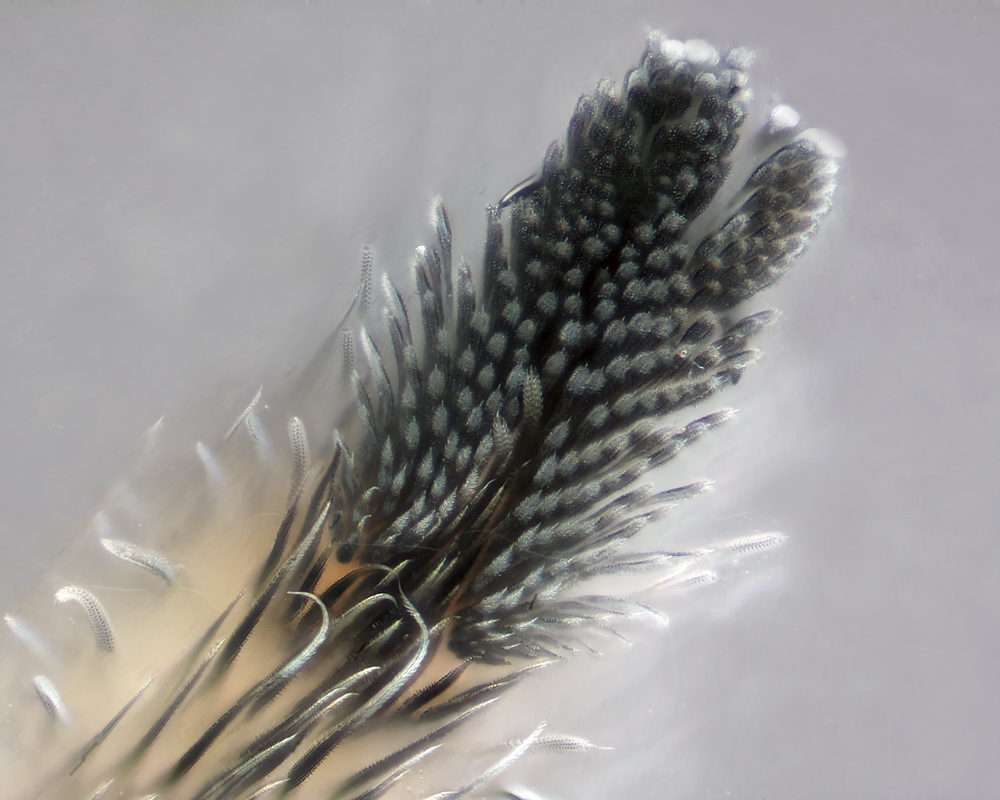 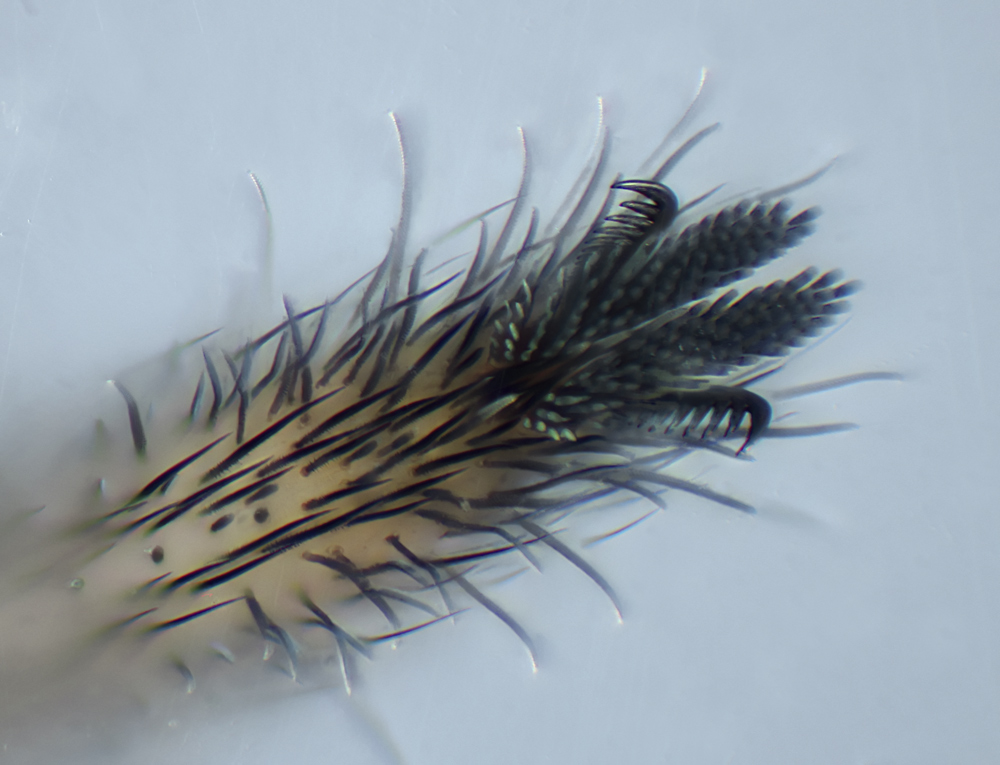 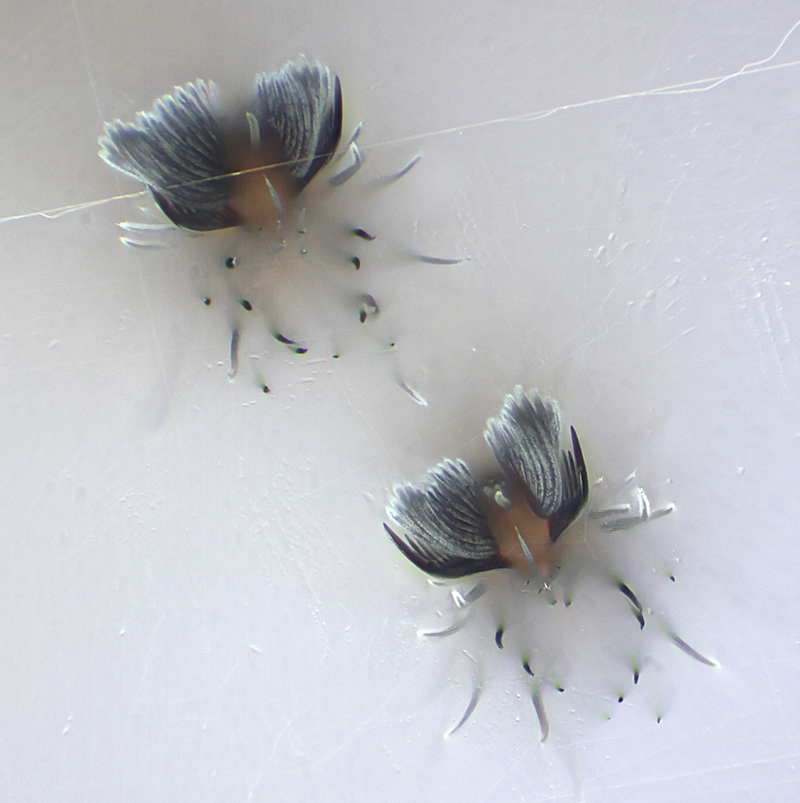 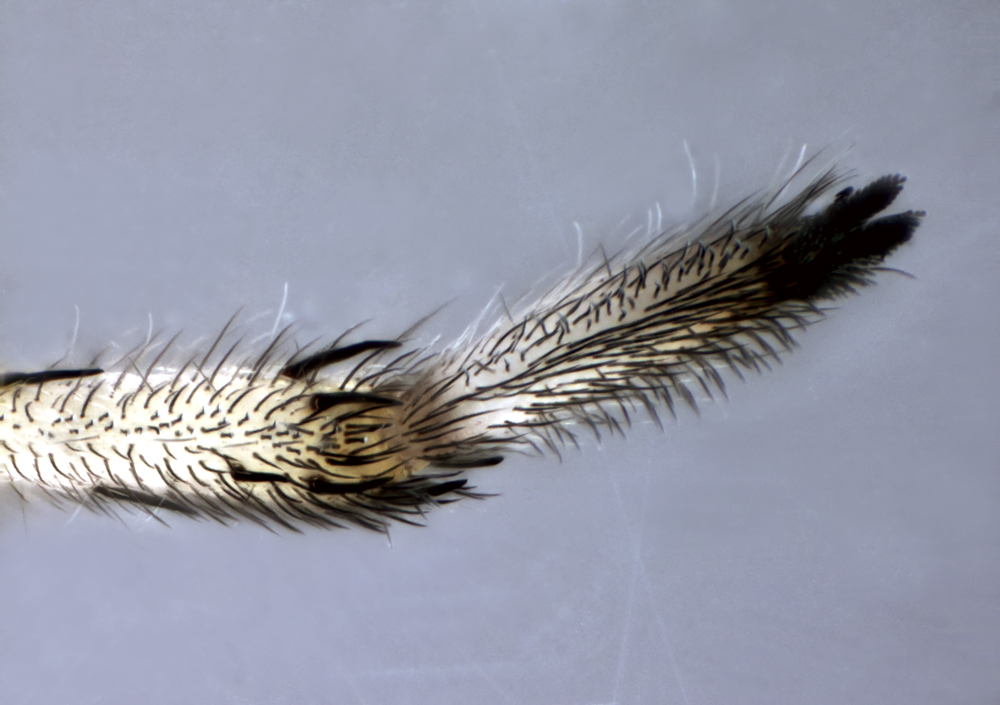 For all images, taken at different times, and of different feet, a live subject is actively employing van der Walls forces, suspended from a glass “ceiling”.

Image 1- Leitz Phaco 40X NPL objective, 25 images at .5 micron increments.
Entire underside of claw tuff. Width of field = 0.27 mm. B & W employed to reduce affects of chromatic aberration.
Image 2- Crop of image one. Width of field = 0.167mm. At the middle right, complete unobscured seta components are seen with measured widths of 10 microns, length 20 microns. Look on their surfaces and any other to see the small dots and edge hairs. Are these the microtrichia or fine cuticular hairs or clumps or groupings of them?

Image 5- Olympus S Plan 10X, 66 images at 2 micron increments. Two center feet still engaged to the glass but on their extreme tips. Seconds later they were removed and redeployed.


Something special and unique for installment Number 50!

These images, taken while the spider, Clubiona canadensis, was hanging upside down, show all the contact surfaces of the claw tuff. Employing the van der Waals forces, created by the fine cuticular hairs making up the surface of the individual seta, the spider keeps from falling to the floor. Image number 1 shows the entire sole of the foot. It is roughly separated down the center into two equal halves. In the cropped image No. 2 each individual, 100 or so, oval shaped objects is called a seta which in turn have hundreds of yet even smaller microtrichia or fine cuticular hairs on their surfaces.

In reality the actual tips of the fine cuticular hairs are what is in contact with the glass, but my microscope cannot resolve them. A scanning electron microscope (SEM) employing magnifications between 3000X and 10,000X is required. It reveals a disk like feature it the tip of every hair.

It is most curious how the limited resolution of my microscope, at this magnification, shows them as rows of dots and hairs at the edges. This may have something to with the fact that they are actively employing the van der Waals forces. SEM images with much more resolution, show the cuticular hairs laying randomly. However those images were not of a claw tuff engaging a surface. The question I pose in the Image 2 caption is what am I seeing here? Clumps of these microtrichia or what? I should not be able to resolve the individual microtrichia.

These images proved to be very difficult due to the fact that the van der Waal forces do not seem strong enough or stable enough to maintain the spider in place for very long. During the few successful exposures it was maintaining itself, but it soon began to slip. Under magnification (100 to 250X) you can see the foot sliding towards the center of the body almost constantly. This would result in an eventual repositioning of all eight legs. The spider will maintain contact until at least some of the feet are on their tip-toes or the extreme ventral points, as seen in image 5.

The best known “ceiling” walking spiders are the jumpers or the Salticidae. Rik Littlefield produced, sometime back, a superb image of that spiders claw tuffs from the side. Apparently several of the hunting spiders posses this ability and Clubiona canadensis is, in my mind, one of the best. Hope to get a Salticidae to be as cooperative in the future.

Walt, this is astonishing work! I had trouble enough imaging a dead foot, and here you've done a live one!!

For other readers, the reference to my earlier work goes HERE for whole foot, HERE for a higher res shot of the whole foot, and HERE for my best shot of a single hair.


It is most curious how the limited resolution of my microscope, at this magnification, shows them as rows of dots and hairs at the edges. This may have something to with the fact that they are actively employing the van der Waals forces. SEM images with much more resolution, show the cuticular hairs laying randomly. However those images were not of a claw tuff engaging a surface. The question I pose in the Image 2 caption is what am I seeing here? Clumps of these microtrichia or what? I should not be able to resolve the individual microtrichia.

I'm not sure what's being resolved. The analysis we did before suggested that the smallest hairs are probably individual setules. But short of some SEM images of the same critter, I don't know how we'd be sure about that.

In the few hours since you posted these images, I've come back to them several times to marvel and ponder. What extraordinary images! They will join your iconic salticid-eyes photographs as "once seen, never forgotten."

Thank you Rik. I have to admit your images were in the back of my mind as I got started on this project. I so desperately wanted to employ a 100X objective as you got to do, but the overall complexity of the arrangement made it impossible. A subsequent observation last night proves that an actively engaged foot appears significantly different than that of the deceased.

Hello Chris. You are most generous with your praise of my efforts. Thank you so much.

This is indeed fascinating stuff. Far removed in scale from our common experience, where if we wanted something to "stick" we'd wet it.
I look forward to further revelations!
Last edited by ChrisR on Wed Nov 07, 2012 1:30 am, edited 1 time in total.
Top

Really fascinating. I was interested to follow up some of the literature on how spiders (and geckos) can cling. I wonder if there might be some detectable optical effects due to the atomic level interactions between the spider setae and the glass. Getting a spider to cling to an optically active (polarising) surface might be interesting.
Leitz Ortholux 1, Zeiss standard, Nikon Diaphot inverted, Canon photographic gear
Top

Chris, Dave, Pau. Gentlemen, thanks to you all. Knowing that others are enjoying the world of science through my modest contributions is gratifying. Dave, I will give polarization a try next time I can conduct such an experiment. Interesting suggestion.
Walt
Top

outstanding, you are the best when it comes to spiders (: I know this question have been asked for hundreds of times but, how do you keep them still...?
Top

Hello and thank you Litonotus.
To answer your question, first you have to be very patient and willing to accept a large number of failed images. Second, you have to learn and become familiar with the subject. Most of these spiders when not being harassed will calm down for short periods. I have found that if kept overnight in a container of limited dimensions they will spin a retreat which seams to offer them some security. With this present they seem to be more resigned to their fate so to speak and will remain still for longer periods.

Also of help is collecting at the end of the season. Some adults by natures rules will not live though the winter. Since they are meant to die they will slow and not even accept food. Being fortunate enough to have them molt while in captivity also provides an opportunity as they are quite motionless adapting to their “new” bodies. Finally I never freeze, introduce chemicals or in other ways attempt to restrain them physically. I have great respect for these amazing creatures and find little of value in imaging a dead specimen unless it is the only way to obtain some new knowledge. Hope this is helpful.

thank you for that information (: You have a great respect for them and they pay back by sitting still (:

PS: I try not too kill specimens too, but in my case it is harder. I watched one water flea and put it on the slide 3 times (with a coverglass) without killing it (:
Top
Post Reply Previous topicNext topic
12 posts • Page 1 of 1