I think there are two different kinds of bacteria. The squiggly ones move rapidly to/fro, and the straight ones seem to glide through the water. I found millions of these in the foam of my reef aquarium skimmer.

It is impossible to identify bacteria by a picture. There are only 4 forms and thousands of different bacteria.

One more thing - the smaller shapes in this picture below, are they the coccus form? Not sure, may be short baccillus.
Pau
Top

Re: the short forms, some of these appear to be doubled cocci (diplococci?), while others look like short rods.
Top

P.S.
How do you identify bacteria anyway? I understand you can separate them into Gram-positive-negative but besides that?
Top

Sorry for posting in your topic, but could anyone help me id this peculiar bacteria 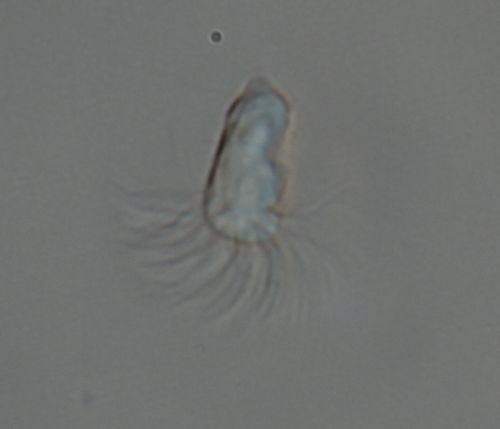 Magnification? If it's a bacterium, I'd describe it as cephalotrichous, perhaps a species of aeromonas, though most of them have fewer flagellae.

[quote="dennisua"]Sorry for posting in your topic, but could anyone help me id this peculiar bacteria
[img]http://www.photomacrography.net/forum/u ... ria1_1.jpg[/img][/quote]
Top

I'm not sure what magnification was. 40X 0.95NA Objective and 15X eyepiece projecting to DSLR sensor. Probably lots of empty magnification. It wasn't moving by itself but flagella were moving slowly.
Top

dennisua wrote:I'm not sure what magnification was. 40X 0.95NA Objective and 15X eyepiece projecting to DSLR sensor. Probably lots of empty magnification. It wasn't moving by itself but flagella were moving slowly.

OK, so there are probably fewer flagellae than there appear to be ('cuz they're moving). Then it's probably an Aeromonas...

Identifying a bacteria to the species or strain level is very difficult. It can be a problem to actually know what a species is, and some very ordianary species can have different phenotypes and greatly differnt roles, non pathgenic and pathogenic E coli being an always topical example. One definition of a species is a group of organisms thet breed with each other. Unfortuantly Bacteria swap genes all over the place, and up to 80% of the evolutionary tree of bacteria is expected to be due to horizontal gene transfer. So there have been a lot of definitions arising lately, one way around this is to forget the species definition and use a pragmatic operational taxanomic unit, that is defined witin its functional use as whatever group it is you arrive at in your own analysis

So even if two species are actually very different they may share some funtional genes that are identicle (MRSA etc). One of the more accepted ways of identifying a bacteria is by 16s OR amplicon sequencing because these methods look at bits of the bacteria that are expected to be exclusive to a given species. The DNA of the bacteria is read and then depending on what it most looks like it is assigned to that species. This takes a fair bit of time and equipment. The advantage is you dont have to have much of an idea what they are.

If you know roughly what type of bacteria you have there are several ELISA tests that identify them quite selectivly and can get to strain species, these are often used for sore throat infections that can be used in the field with no special equipment. The disadvantage is you have to know more or less what it is before trying to identify it.

It is often easy to narrow down the search, as mentioned above with the spiral shape that you have taken such nice shots of. Otherwise as said the gram stain is a method that colours two different groups of bacteria differently so you only get an idea of which of the groups they are from.

To get an idea of what sort or near species of bacteria are pressent you can use something called an ABI strip which has lots of tests like the gram stain in one and depending on what combination of tests are positive and negative you can get a reasonable picture with no equipment in the field.

Irrespective of how you identify the bacteria and say it is possibly one species or one strain someone will almost invariably say that the classification is incorrect, that it really wasn't a species anyway or because it does not conform to a certain criteria (recently developed in their group) the method was not appropriate anyway

O.K. the latter is not always true but it is sometimes the case that the identification of the bacteria has less to do with the bacteria than who or how it was identified.

So it is a very difficult question even with the right resources.

The classifications above are probably the most useful anyway, depending on your reason for identification, even if they dont go to species level.