All right, I think I understand the concept:

I think for now I'll keep my eyes open for the next several weeks and see if I can get the whole setup at once off the ebay. If not, will explore DIY route.

Yesterdays ecstasy sort of faded away and again I'm not liking my darkfield. Took several shots with and without the diffuser filter: 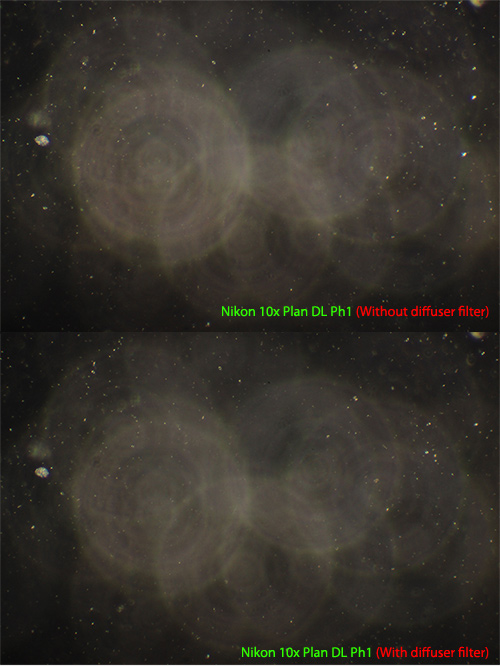 Yesterday I got much better results with the diffuser filter trying to diminish the appearance of the light blobs. They don't travel with the stage so it would suggest that whatever it is is not on the stage. I started taking things apart and cleaning the dust but it hasn't helped. Any ideas?

Daniel is right, chromatic aberrations are awful, not visible through the binocular but obvious on the image. This is the near center 100% crop, photographed at ISO 400: 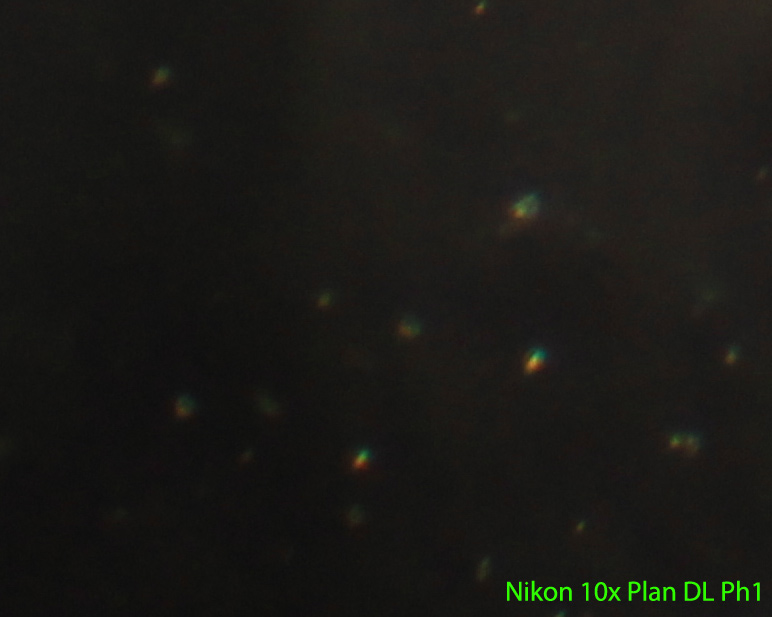 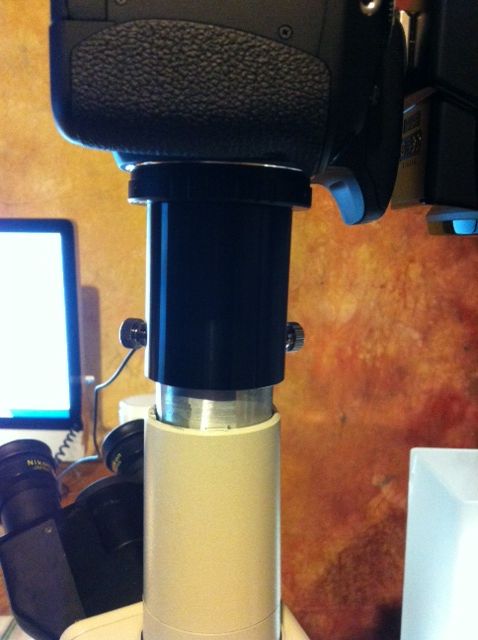 I think I have an alright objective that should not display such a severe case of chromatic aberrations. This is the exact objective I have:


Pau wrote:the posted sample image doesn't seem centered at all. Maybe you need to aling all the illumination components.

the image you saw was before I centered the bulb, it's much better now.


Pau wrote:To obtain good DF at low magnification you can play with the condensor heigh.

As soon as I start lowering the condenser the resolution disappears and the view becomes muddy gray. And I can raise the condenser only by a few millimeters as it hits the slide. When condenser is focused it is very close to the slide. I haven't tried yet with condenser top lens removed for 4x objective. Will be interesting to try.
Darius Kersulis
http://www.flickr.com/photos/dariuskersulis/
Top

You got the polarization part right.

I feel that you might resolve your problem faster if you make a topic in the micro/macro techniques part of the forum.

The blobs obviously appear because of bad alignment and of course the camera position contributes to it. You can align the condenser itself (I saw two screws in front with which you could adjust it I assume), you still can try to align the camera "connector," although from the picture alone I can't figure how. Can you use some paper to do it? Do you have something to hold the camera?

To be honest, when it comes to DIY in microscopy, the only thing that I am always afraid doing is connecting camera to the scope as it is the crucial step. You get bad images - you can assume you don't have a scope as you can't show what you see. Yes, there are many factors here, the distance is important, the lens in the connector (if you need it) and its position and parameters, the aliment, the amount of light that can get in, the surface of the metallic tubes (if it's shiny, you get lots of artifacts and reflections). And ultimately you have a camera system that is so designed to ruin pictures on every step.

So, if I were you I would be more concerned about camera connection issues first, and then get to the problems that are simpler
http://microworldsphotography.com
Top

Daniel, thank you for taking time to respond.


Starshade wrote:Do you have these circles when you look through the binocular?

Yes, same blobs seen through the binocular, thats why I would have to rule out the camera issues on that one.


Starshade wrote:Do they move when you move your camera with this shaky connection system?

When I move the camera they do NOT move with the camera, so it suggests that blobs originate outside the camera/DIY phototube and just being projected onto the sensor. By the way the inside of the phototube is black, so no reflections can come from that.

I know the camera connection is horrible and I'll work on that, but I don't believe it's the origin of the light blobs seen in darkfield. As I said, those blobs are also visible through binocular as well as through all objectives. On 4x it looks like a Christmas tree with lights.


Starshade wrote:Do they move when you play around with condenser?

11:20 AM update. I took another sample from different source and the light blobs are not as apparent as yesterday. Now that I've spend some time trying to know them it looks like there are 3 kinds of blobs:

1. Small ones that are fixed in exact position to the elements in the slide. I know those are particles on the slide since i can sharply focus onto them.

2. Medium blobs scattered around the center. Quite numerous. Stay in the same position when condenser is moved. When the stage is moved and you follow them visually they slowly faint, and then disappear as you get closer to the edge of FOV. As I move the stage faster the blobs near the center move, fade and new one reappear in the same or almost the same position. Almost like kaleidoscope effect.

3. Larger than medium blobs (let's call it Large). Last time observed 2-3 of them, one being much brighter than the other two. Large blobs are fainter than medium blobs, concentrated near the very middle of FOV, and move as you move the condenser (in relation to other blobs). They don't change the brightness though as you move the condenser. So if there was some sort of condenser miss-alignment and Large blobs the consequence of it then I would expect for them to faint or disappear when I randomly adjust the contender position and perhaps getting to the right alignment purely by accident. When lowering the condenser Large blobs get larger.

I am riddled with multiple problems, not sure what else I can do to align the condenser better than I already did. One theory based on small blobs which are due to dust particles on the slide, is that other blobs also the consequence of dust somewhere else in imaging train? If so where to look for it?

But I'm probably going to be told that it is still an alignment issue. Few other things, when closing condenser iris, the view darkens as well as the appearance of the blobs diminishes. When closing the stage iris no real effect to the blobs.
Darius Kersulis
http://www.flickr.com/photos/dariuskersulis/
Top

I think the large blobs are reflections of the condenser somewhere inside the optical path, perhaps inside the microscope tube between the objective and condenser.
I have applied strong levels to your image and I guess I'm seeing even the darkfield stop imaged. 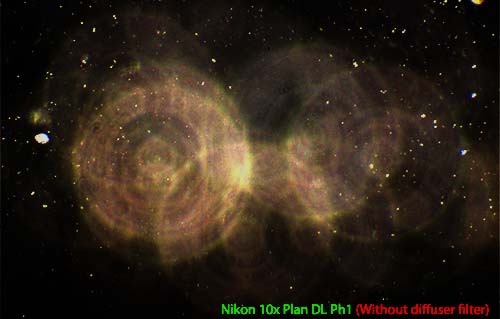 Maybe you can try to remove all possible reflective surfaces inside the microscope body like filters, DIC prisms or even the trinocular beamsplitter if possible
Pau
Top

Okay, thank you Pau. Will have to think, test things and see if I can get rid off those blobs.
Darius Kersulis
http://www.flickr.com/photos/dariuskersulis/
Top
Post Reply Previous topicNext topic
20 posts