Between MITs' on-line free courses and studying fungi on my own, I have been pretty busy here of late. But, while pursuing the realm of mycology, I managed to squeeze in a shot of a springtail while also trying to isolate some fungal filaments taken from the soil. A few of those filaments can be seen directly below the springtail. 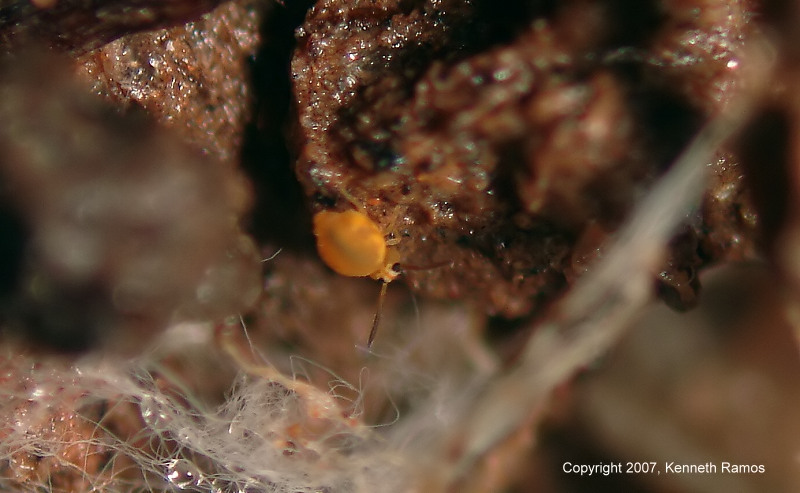 It seems as though springtails love to feed on fungi and I suppose this little guy is no exception. 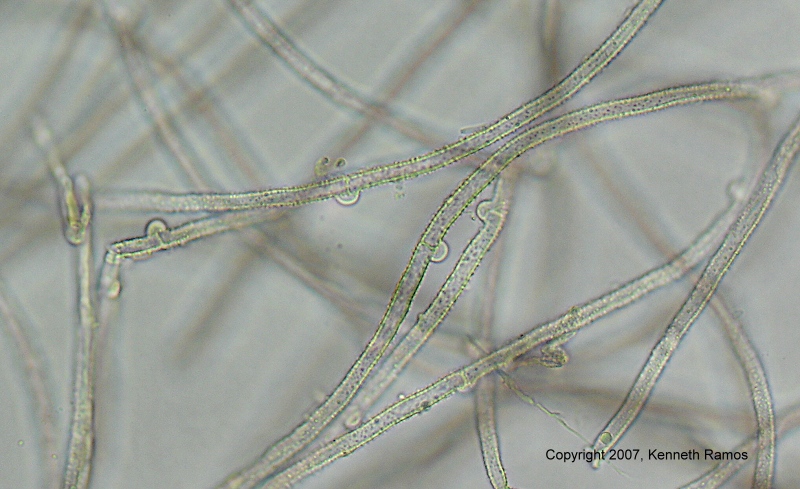 Basidiomycotina (mushrooms/puffballs) could this be the hyphae associated with such fungi? I gathered this specimen from the soil beneath the decaying leaves of autumn, in the soil at the base of a hill, were of course the ground would be the dampest due to our recent rains. I have also come to the realm of understanding that, if you are going to study fungi or anything that has spores, you are going to have to get used to oiling things up, for a 100X oil immersion objective is a neccessity.

The nodules that you see may be what is called "clamps." It is these clamps that allow for the migration of nuclei between the, few if any, septa or cell-walls of the hyphae, however if you will notice there are very few if any septa and being quite new to this I will not go as far as to say that these are indeed clamps but they do appear as such and I am only assuming that these hyphae belong to the Basidiomycotina. There are a few other fungi that can also be found thriving in the soil, such as Oomycota.

Great research on this Ken. I spotted an interesting item when looking up the word “hyphae”. It is stated the cell walls are made of Chitin, which is the main component of the shells of crustaceans and insects. Verrrrryyyy interesting. Can you Identify the fungus by the Hyphae?
Take Nothing but Pictures--Leave Nothing but Footprints.
Doug Breda
Top

Can you Identify the fungus by the Hyphae?

In some instances I believe you can but there are a myriad of things to consider. This one was found in the soil, it could be Oomycota or Basidiomycotina, both are found in the soil and Oomycota in both soil and water but, Basidiomycotina uses "clamp" structures to move nuclei between the septa (cell-walls) of the hyphae (filamentous structures). Cell walls are not a prominate feature among most of the hyphae found but do occur quite often in a few others. The nodules shown on the hyphae here and I use the word nodules for lack of a better discription, could be clamp sturctures but however I am unsure at this moment.