Could you call it a hypothallus, the base that is? Well I am not sure. These are strange organisms yet to me. However, I am learning more here and there about the Ascomycota or Ascomycetes.

The fruiting body plucked from behind the head of one of the ants I have been studying, was placed in a petri dish with an alcohol and mild detergent solution (Palmolive) for softening and allowed to sit over 24hrs. A squash prep was attempted but with very minimal results, this thing is tuff. For those of you who are familar with the old Palmolive adds on american TV, sorry "Madge" you have met your match. The ad promised that it would soften hands while doing dishes, not fruiting bodies from pathogenic fungal parasites. 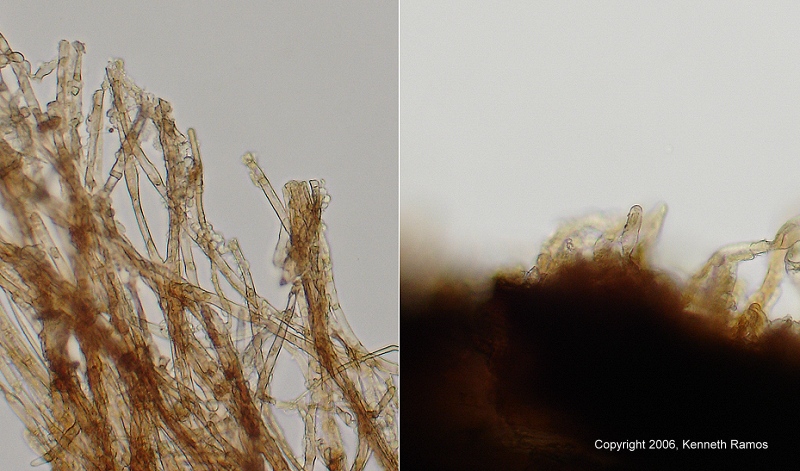 The fruiting body did soften but only to a very small degree, enough to allow me to get two shots at the base of the specimen. Both images were photographed through a 40X/0.65 Zeiss CP Achromat, due to the base being thicker than the rest of the specimen, the cover slip sat at an angle, not allowing oil immersion to be used, however I did try it but was unsuccessful due to the fact the objective came into contact with the cover slip, so instead of going on I aborted the attempt.

Ascomycetes reproduce by means of a bag like structure, an ascus. It may contain 8 or more spores, in the image to the right (center) the seemingly bag like structure rising up may be and ascus but I am not sure. However to the left, I did manage to capture some hyphal filaments at the base, note that there are some, what appears to be "spherical bodies," these may or may not be spores.

We Were waiting for these pictures!! I think you will neet to get the hammer and try that on these things.
Take Nothing but Pictures--Leave Nothing but Footprints.
Doug Breda
Top

Ken- Happy New Year! There are to many Latin words in your recent posts for me to understand! I can report that I have started using the immersion oil, I ordered, on my microscope... It doesn't squeak anymore when I turn the big knob! LOL! Just Kidding!
Bill
Top

Thanks guys, I am still gouging on it though. The fruiting body was retuned to the detergent and alcohol bath to continue soaking.

So it wants to play rough, eh? Try something a bit more alkaline...some ammonia/detergent or hydroxide (weak NaOH or KOH solution)/ detergent mixture and see what happens....
The shots you got are promising though, you've captured some hyphae with good detail and once you can cram on that coverglass without breaking it and squish a bit of the fruiting body down it will be very interesting to see what its made of....
I still need to look for ants on my trees. If I find one that has "summitted" I'll embed a fruiting body and try to cut a few sections.


If I find one that has "summitted" I'll embed a fruiting body and try to cut a few sections.

That would be very interesting to see indeed. It is tough enough and thick enough that maybe you could get a c.s. or maybe even and l.s. I found another today with a fruiting body of 3/4 inch or about 18 mm, longest one so far. Outside of the hopper, which got me reallys started on all this, ants seem to be the only thing around here with the infection and all the ants are about 9 to 10mm in length. I read in one of the provided links that, each Cordyceps is of a different species and each one is atuned to a particular insect and also a particular part of that insects anatomy. So all that being said we know that it is not an opportunistic organism.

I have spent over half of the day scouring the area around my home, infected ants are everywhere but nothing else. I am developing an unhealthy interest in these things. It occured to me that I would probably freak if I were to find a mole or a field mouse infected with the fungi, maybe even a stray dog or cat! Then we would know that it had transitioned to animals and...and...

My imagination gets carried away sometimes. Been watching the "Outer Limits" to much. But seriously the thought had come to mind.

My chemistry is not all that good, although a long time ago I had a B+ in high school but dropped the course

So NaOH or KOH, Sodium Hydroxide or Potassium Hydroxide, am I correct? Would that be locally available somehwere without going through a supply house

Good old "lye" is NaOH or KOH...and you could also just try sodium carbonate ("washing soda") or sodium bicarbonate ("baking soda"). Regular clear ammonia diluted about 1:10 should work too...I am wondering what to try next if basic solutions don't soften this thing.
They look to be very tough indeed, maybe too hard for paraffin embedding...so it would have to be a plastic block...fortunately they are small, so they are ideal for plastic...now I just have to find one...


Finding one or many, should not be too hard Dave.

Most of the ones I have found have been on small bushes and the limbs of small trees, no higher than eye level for most. The ants at this time of year are pretty weathered and the grime they have accumulated encrust their bodies. Looking for them, however, can be a challange but not too difficult. With all the ones I have found around and near my home, it is a wonder I have any ants at all.

I have to return to work on Wed. so during my lunch time stroll, I will investigate the woodlands around the plant where I work. For some reason my place of employment always turns up good stuff.