I would like to thank MacroLuv/Nikola for (unintentionally) giving me the idea of doing a project on this coin. I bought this coin over 30 years ago and only today with help from another forum (Yahoo Moneta-L) have I been able to confidently attribute it to the licenced monier.

It is a silver denarius from the time of the Roman Republic, coined (in Rome) under the authority of monetary magistrate Lucius Antestius Gragulus in 136 BC. Diameter is 19mm at longest point.

The obverse carries the winged (helmeted) head of Minerva (or Palas) in the personification of Rome. Although difficult to read, behind the head are the letters GRAG (for Gragulus). The reverse shows the god Jupiter holding a sceptre in his left hand and a thunderbolt in his right. Hi is driving a quadriga (4 horse chariot). Below the chariot is the monogram of Lucius Antestius (looks like L.AE..).

Although clearly struck from a different pair of dies, this is what a near perfect coin should look like : 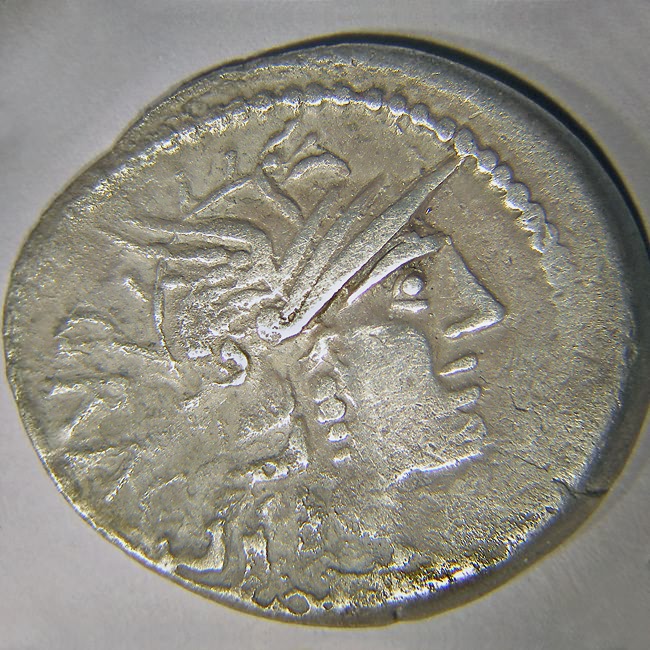 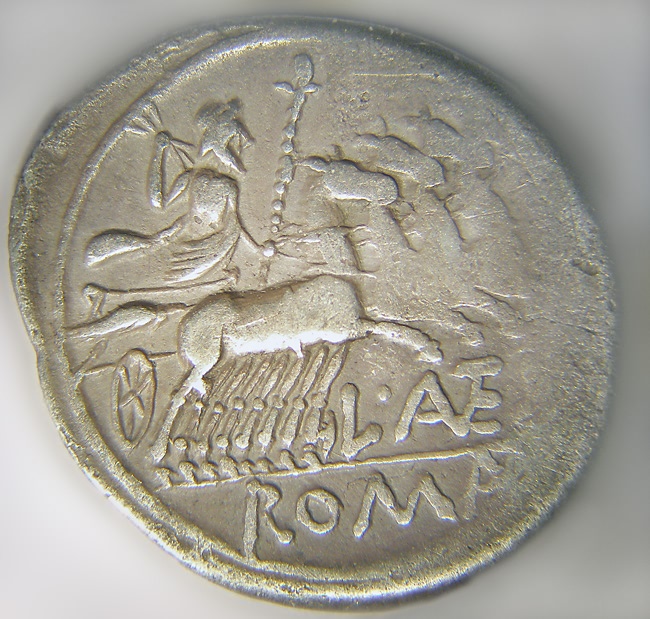 Took me a while to make out that winged head there Bruce, that is one interesting piece of money

. I have often read about a denarius but never had any ideas as to what one looked like. Is there any substancial monetary value to these coins or are they just a few dollars/pounds here and there?

It helps if you squint (making out the wings that is) or stand back from the screen.

Like most collectables the price varies on desirability, availability and condition. So some denarii fetch as little as say $20 whereas a choice piece from a well know emperor could fetch several hundred dollars.

My posted coin (136 BC) is from the Republican period - from about 500 BC to 45 BC when Julius Caesar was appointed perpetual dictator. Nice coins from say 200 BC to 45 BC generally fetch about $75 to $200 (more than $500 is exceptional). Roman coins pre 200 BC are rarer and generally more expensive for a nice piece.

Denarii from the imperial period (45 BC onwards) generally speaking fetch a lot more for the early (well known) emperors like Augustus, Tiberius, Caligula, Claudius and Nero) [say $200 to $500] and significantly less for the later, less well known emperors (and there were a lot of them) [say $10 to $200]. Coins bearing the portrait of the emperor's wife generally (but not always) fetch less money too.

Forgeries of all periods are a real problem - and its getting worse, so really not a good idea to buy without advice and preferably from a reputable dealer.

I'm enjoying these shots Bruce. As a youngster, I used to be a keen coin collector (before I became interested in minerals). I still have a small collection (mainly British coins going back to Henry III, and a set of old Chinese coins).
Top

What if they made forgeries in their own time?
Coin is more valuable in this case, I guess?

Hec Sevso tibi durent per saecula multa
Posteris ut prosint vascula digna tuis
May these, O Sevso, yours for many ages be
Small vessels fit to serve your offspring worthily.

An inscription from the most notable of Sevso Treasure, a large dish, 70 cm in diameter and weighing nearly 9 kg.
Here some belives that Sevso Treasure is from Barbariga - Istria - Croatia.
... eyewitness was a seventy-two-year-old former secret policeman named Anton Cvek. Cvek claims that on May 15, 1961, he was ordered by army officers to report to a high-security military base near Barbariga. When he arrived, he was told that during a routine excavation on Brijuni Island, just offshore, soldiers had uncovered Roman ruins and a stone sarcophagus. The sarcophagus contained a hoard of spectacular silver, which, he says, was the Sevso treasure. Brijuni was the summer residence of Marshal Tito, and strictly off limits, so the silver had been carried to the mainland and stored in a small house not far from Brijuni. Cvek said that he was accompanied by a technician named Vlado Klikic, who filmed the silver and took some photographs, and that Klikic died shortly afterward and the film and photographs vanished.
Barbariga is a Croatian seaside village just north of Pula.
In the heart of Pula stands the astonishing sight of a Roman stadium nearly as big as the Roman Coliseum, and in much better condition. (?) Barbariga's rocky coast was once a kind of Roman high-end subdivision, with villa after villa overlooking the Adriatic. Some of the Romans who fled the barbarians in Pannonia settled here, with nowhere else to go but back to Rome itself, across the water. This is just one reason the Croatians are convinced that the Sevso silver belongs to them.
Though certainly Roman in origin, Lebanon, Croatia, and Hungary have all made claims on the objects.
The meaning of beauty is in sharing with others.

...and yes, even in Roman times forgeries existed in large numbers and are greatly valued (for their interest) by some collectors. Contemporary forgeries were generally cast rather than struck and of course baser, less valuable metal alloys were used. Other faking methods were also employed, including silver-plating copper coins (copies of genuine coins).

Thanks Steve - pleased you enjoyed the Roman coin shots. Apologies for tardy response but for some reason I didn't get the usual email advising me of your posting.

I like to use each new coin as a springboard into a little research on the associated period/emperor/king/people. I feel somehow that holding the coin in my hand gives me a tangible link to the period I'm reading about. Examining the coin in detail and knowing that, more than 2,000 years ago, someone designed it, an equally "real" person made the dies, another struck the coin, and many people bought things with it. Then it lay lost somewhere for 2,000 years or more while ALL our "history" was played out. And now it's MINE, MINE, MINE....

(after all Scrooge is a Christmas story)
Top

Bruce... even just looking at the images it is fun to imagine what this coin has all "seen". Handling it must really give a sense of a link to the past.

Last year I fooled around with some amber inclusions, and my imagination ran wild with what this little insect, trapped millions of years ago, must have experienced and seen.
Top
Post Reply Previous topicNext topic
8 posts • Page 1 of 1