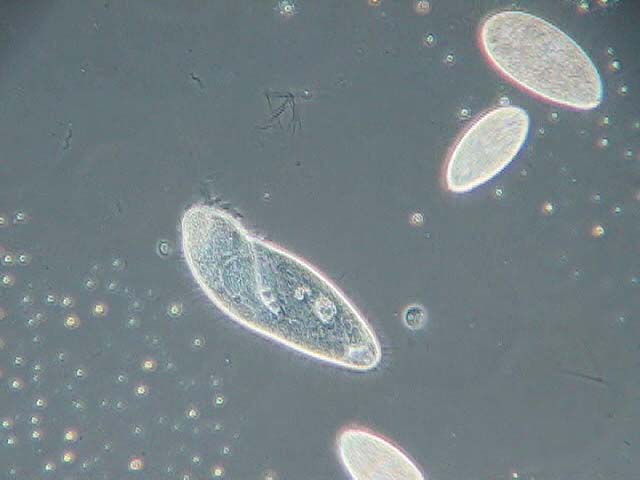 Here is a link to a few movies of a Metopus that swam into my view.

In the second movie I switch from phase contrast to darkfield and I am wondering if the little sparkly things inside the Metopus are symbiotic bacteria?

those videos are absolutely terrific!! Thanks for posting.

These movies are remarkably clear and free of motion blur, even when the bugs are moving quickly. They remind me of what my old videocamera used to do on its "high speed sports" setting with lots of light.

I'm thinking that the actual exposure time must be 1 millisecond or less per frame, even though the overall frame time is 33.3 milliseconds (30 frames per second). That suggests a high ISO setting, but at the same time I'm not seeing much noise in the uniform gray background.

Some good video there Thomas, a little hot in spots but good just the same. You even captured the water currents being created by the motion of the cilia.

Rik wrote: " I'm thinking that the actual exposure time must be 1 millisecond or less per frame, even though the overall frame time is 33.3 milliseconds (30 frames per second). That suggests a high ISO setting, but at the same time I'm not seeing much noise in the uniform gray background.

Hi Rik, Ken Bernhard and all. Thank you for the comments.

I must tell say that I am not very technical in my approach. I probably should be more conscientous about settings. I just shoot in movie mode, automatic setting mode with a Canon S3 IS. I might be shooting way too bright. Not sure about that. I have a Meiji compound microscope with trinocular head and it splits the light 80/20 into the camera so I have 20% light to the eyepiece. The microscope is Kohler illumination but I add a halogen flexarm light on top, sometimes two.

Perhaps the movies could be better if I had more control over settings but when I am observing at the eyepiece I am always switching between phase contrast and brightfield, and sometimes darkfield. So the camera has to follow the jumps in light automatically. Also, I wish my brightfield movies were brighter and crisper like all the fine photos I see here. I think they could be processed in I-movie for better contrast, like Photoshopping, but this is a very time consuming procedure.

Anyway, I am just ruminating and I appreciate the lessons, critiques and thinking here.

Thanks for the additional info. Whatever it is that you're doing, it's working great! The reason I asked was only because the movies are so good. I borrow technique shamelessly!

About the brightness, you're probably at the mercy of your camera to a great extent. It turns out that on average, most scenes are gray. Maybe they average around 12% gray, maybe it's 18% (see here for that discussion), but roughly speaking, it's, um, gray.

So what the meters in cameras do is to measure the highlights, the shadows, and the stuff in between, then pick a compromise exposure that strikes some sort of balance between that average gray and not blowing out the highlights or blacking out the dark parts too badly. The compromise turns your brightfield into lighter gray and your darkfield into darker gray, but they're still, um, gray.

If you reduce the light levels, chances are that the camera will just increase its exposure to make up the difference. That would leave you with the same gray, and maybe throw in some really nice motion blur as part of the "bargain".

You may be able to set "exposure compensation" on your camera to make the brightfield brighter and the darkfield darker, but those will probably take two different settings so it will interfere with switching between the two. (On my Canon SD700 IS, it's called "exposure shift", and according to the manual, the dang thing will reset almost every time I touch a control.)

Sorry for the gloomy predictions.

I'd love to be wrong here, and if you figure out something better, please let us know!

In the meantime, rest assured that your movies look great and what we really want is to see more of them.