I found the non-stereo image slightly difficult to interpret, so thought I'd try a stereo version. I'm interested to see the effective rendering of the thickness of the mountant and its inclusions, including a little cloudiness.
Graham

Very nice -- now I understand the structure of the beast. Thanks! 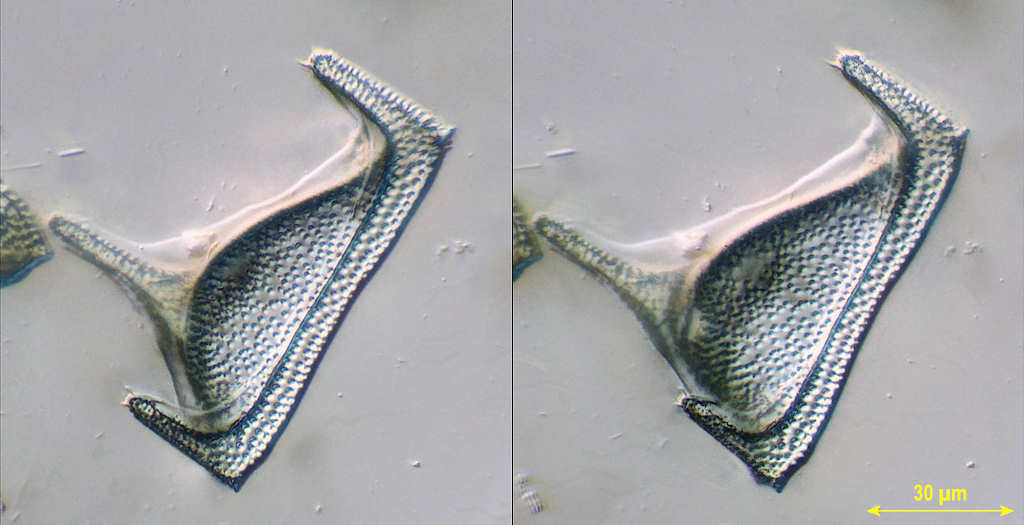 I'll bet you have no idea how happy I am to actually see the structure of these things, instead of just guessing what they might be. Please, keep shooting!

A few words about this diatom and about workflow.

This slide is slide no. 33 from my boxed diatom slide collection, Mors, Jutland: Fossil Marine, Flatters & Garnett 1954, styrax mountant. A little scouting around suggests this is Trinacria sp.


Cells tri- (quadr-)angular, attached in chains by the extended apices. A marine, fossil genus occurring in the early Eocene.

In respect of workflow:

The stack was shot using flash to minimise vibration. When not using live view, vibration can be seen visually when the shutter is released, but I prefer to use flash for this type of work.

The increments were manually judged because they were too fine for easy setting using the fine focus markings.

The images were pre-processed in Helicon Filter for white balance and dust map.

Post processing was in Paintshop Pro X2 for contrast enhancement, cropping and resizing for publishing. I applied a low level of sharpening on resize.

The cropping was done by cutting one image and pasting it as a new layer over the other and then cropping. The canvas was then resized and the top layer placed to one side of the bottom layer to give the correct layout for the stereo pair again. The layers were merged and the final image trimmed and saved.
Graham

How can you watch this in 3D?
Top

Nice images, Graham. I can see 3D in your images, for some reason however not in the diatom in the first image pair (but I do see depth in the surroundings). Will try again tomorrow with a fresh (and crossed) eye.

, but looking them as single photos they look excellent
Pau
Top

len wrote:How can you watch this in 3D?

Len, these are crossed-eye stereo. See HERE and the surrounding thread for some suggestions about how to look at them.

LordV also notes that "Cross-eye stereograms can be difficult to visualise at first- I suggest if you have trouble then holding a pencil up about 4" in front of your nose and focus on that. You should notice the picture pair resolve into 3 shots in the background, try to hold the middle shot whilst withdrawing the pencil. It's a bit like trying to ride a bike- once you have succeeded it's much easier after."

Very nice effect. I see them easily and quite well. It's never been a problem for me. But, these are not real stereograms, right? If you used one original image and just copied it and moved it to the side, it's a "psuedo" stereogram. I would think though, for single images, a microscope stage should be the easiest thing there is to make real ones. Maybe not stacks though.

Mitch, in as far as they are two images from a single data set taken from a fixed viewpoint (except in the z-direction, which will cause the perspective to change a little on-axis), yes they are pseudo-stereograms. The depth data are real enough and this gives a useful way of visualising these data. No doubt Rik can comment further, but I certainly have found them useful in interpreting 3D structures, whilst being aware of the potential for illusion - the source images were DIC and that in itself gives an illusion of solidity where none may exist. In the end, I can only point to the quotation following my signature...
Graham

I have seen psuedo sterograms before, and there is even a free program for download that makes them from a single image with one click. They do look close to the real thing, but not perfect. I was just making sure I had it right, cause these are impossible to tell. I never would have guessed if you hadn't said something. I'm guessing it was the stacking that makes them so good.

Mitch, the two images in each stereo pair are synthetic, but the depth rendering is quite real and very accurate as long as the slice thickness is uniform.

For some discussion and other images see these documents:


I was just making sure I had it right, cause these are impossible to tell. I never would have guessed if you hadn't said something.

Excellent! That's how good they're supposed to be.

I can't wait to try a no stack pair of single images to see if it works, just by sliding the stage to the right a little bit for the second shot.

Mitch640 wrote:I can't wait to try a no stack pair of single images to see if it works, just by sliding the stage to the right a little bit for the second shot.

Also you can do good stereo microscopy even without sliding the stage. Just make a condenser stop that blocks off light from one side. Look down the microscope tube with an eyepiece removed to confirm that you have things set up correctly. One half of the objective should be dark. Take one picture with the left side blocked, then another with the right side blocked. The resulting pair of pictures is a true stereo pair.

See http://www.funsci.com/fun3_en/hmster/hmster_en.htm for more info on all those techniques.

If you try to combine stacking with the other approaches, be sure to turn off alignment. Otherwise ZS will try to undo the shifts that you've carefully put in using the oblique illumination, and the result is liable to be a mess.