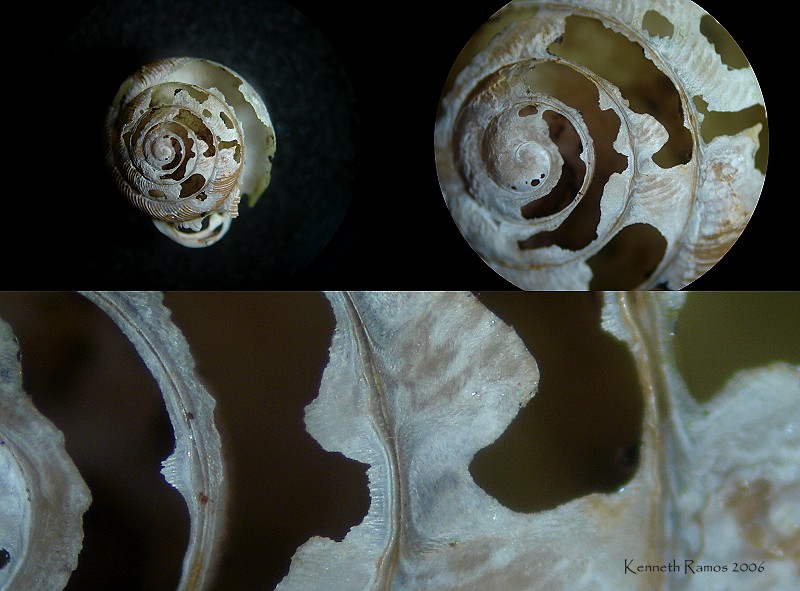 Old Snail Shell, a broken home
I don't know a lot about snails, other than that they are usually quite slimy but their shells are composed of calcium carbonate and as the snail grows, so does the shell. Snails that have shells will close off a section of its shell and add a new chamber as it grows, each one being larger than the previous by a constant factor, as a result, the shell forms a spiral.

The shell of snails and other molluscs are, as I said, composed of calcium carbonate, and because of that they need a somewhat watery environment to get the calcium in their diet, so as to produce a strong shell. A lack of calcium or a low pH in their environment, can cause thin, cracked, and perforated shells. Usually they can repair this but sever damage can be fatal.

Snails can be found in a wide variety of places and some are edible and those can usually be found in Burgandy!

Super photos Ken. Is this a land snail? I wonder if acid rain is affecting them. Also, I wonder if small rodents would chew on them like bones to get calcium.

I would imagine that there probably are some other creatures who might feed on these shells. This one was found in a flower pot and is about 11 mm in diameter, must have been in there all summer long seeing as how it has deteriorated so much. Thanks Doug

That's an interesting and effective layout. I'd be lost without the low mag shot to show me the overall appearance, and at the highest magnification I can see delicate thinning of the edge that the other two shots don't even hint at.

For an old and battered shell, I thought it looked pretty neat under the microscope. Thanks Rik

I really like the lighting on the upper image Ken. It looks like a museum collection photo.

Well, I never really considered that Walt but I suppose you're right, it does.

Thanks Cyclops, maybe it would make for a nice print.