Found this growing on some animal dung (phew!

) No it wasn't that bad, it was quite dried and bleached by the sun but still enough organic matter for some form of life to survive on and I noticed these fungal hairs growing off of it and they were covered with frost, by the time I brought them indoors to photograph, they were nothing more than mere droplets of water. 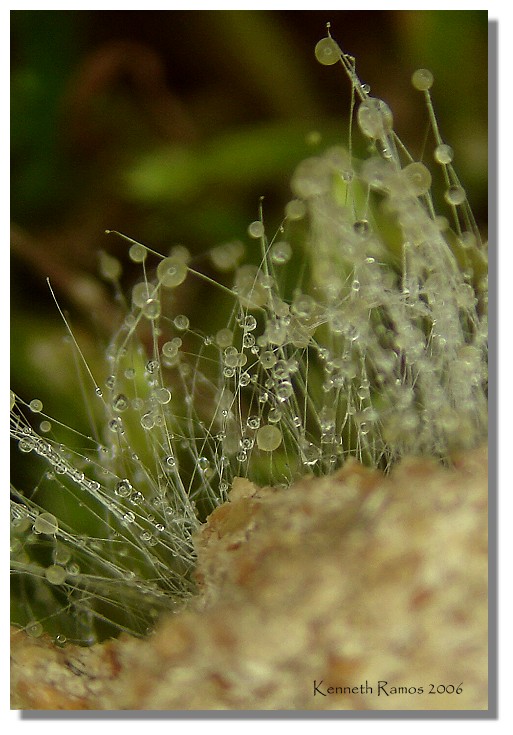 NO! I did not pick it up with my hands or in no way touch the thing, besides it was quite a small bit of animal dung, of some kind.

I used an old spoon, care to come for dinner?

I`m not saying anything!!! What happened to getting on the ground and taking the ground shot...didn`t want anyone seeing you taking macro pictures of poop at work.

It is a very cool looking picture for sure..interesting subject Ken

And what is "Standing Out, Like Hairs in a Biscuit!"...is that a southern saying????

And what is "Standing Out, Like Hairs in a Biscuit!"...is that a southern saying???? (from a Yankee)

A long time ago before canned goods came along, everyone made their own biscuits, my grandmother called hers "catheads." Boy were they ever good but not that my grandmother ever let this happen but occasionally one might find a stray hair that had made its way into the dough and got baked with the biscuits

and if you ever seen a biscuit with a hair in it, it sure stood out from the rest. So yeah, its southern slang.

No folks at work don't know that I photographed poop with fungi growing on it but I have been accused of looking like it from time to time.

This was some sort of small excretment, probably left behind by some opposum or raccoon, maybe some other small creature who knows, I personally use the bathroom, though I am a country boy of sorts.