Here's a selection of images from a cross-section of a mouse head. A what? I hear you say? Yes, you can decalcify a bony specimen after you fix it, and then embed it and section it like a softer sample. This was a
slide I made a long, long, time ago, but decided to see how it looked under fluorescence, and was pleasantly surprised to see details under epi-fluorescence that were not readily apparent in the bright field image of the Hematoxylin and Eosin Y (so-called H and E) stained sections. There's some precedent for this in the technical literature (see for example, de Carvalho and Taboga, Histochem. Cell Biol., 106, pp 587-592, 1966 where they imaged elastic fibers in H and E sections). The reason I decided to show you guys these results is that many people don't realize
you can get good fluorescence results using a relatively safe and inexpensive dye like Eosin Y (the hematoxylin actually quenches fluorescence, as you can see the nuclei are all dark regions in the following images). Eosin Y, Phloxine B, and Fluorescein are all "Fluorone" family dyes. Fluorescein is typically chemically attached to other molecules (like antibodies) and used to mark specific sites in cells and tissues. However, the amateur can use Eosin Y or Phloxine B as good, general purpose fluorescent stains. They are far less toxic than other fluorescent dyes which I couldn't in good conscience recommend to those who are not trained in handling toxic chemicals, with tested gloves etc. They also fluoresce well under blue (420 to 490 nm) light, so you don't need a mercury arc lamp to excite the dyes. A bright blue or violet LED flashlight will work well, and you can hold it off-axis with a small
machinist's base and get decent results. You will need a long-pass (> 520 nm or so) filter before the camera to get rid of the blue exciting light in your image. A DSLR is easily sensitive enough to see the fluorescent images with 1-30 second exposures. You will notice that certain features which barely show up in the brightfield images, are strongly fluorescent, and that some features which appear to stain in similar colors of red-orange in bright field look very different when illuminated
by blue light under the fluorescence scope. Many samples also autofluoresce (chlorophyll in algae is a good example) so you don't even need a dye...
The first two images are a region of the tongue surface. You can see how the keratinized regions fluoresce bright yellow, and there are some things which barely stain with the eosin, yet are bright green when excited by the blue (420-490) light. I think they may be some food debris (cellulose). The emission colors of the dye depend on their local chemical environment, what the dye is bound to, which is one of the interesting things about fluorescence, you often see things that the regular (absorption) contrast doesn't show.
The next pair of images is centered around a mucus gland in the same area. Details of the fibers in the connective tissue show up clearly in the fluorescene image. Notice that the nuclei (purple in the bright field images) don't fluoresce. There are fluorescent stains for nuclei, but they are usually strong DNA-binding compounds, and as such are seriously mutagenic and toxic. 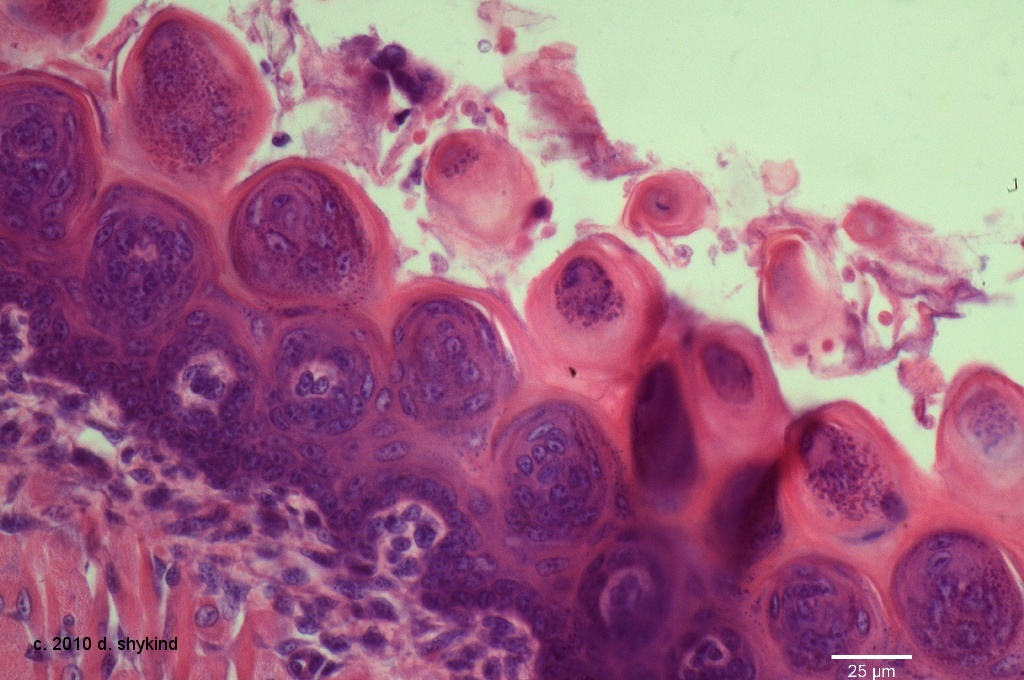 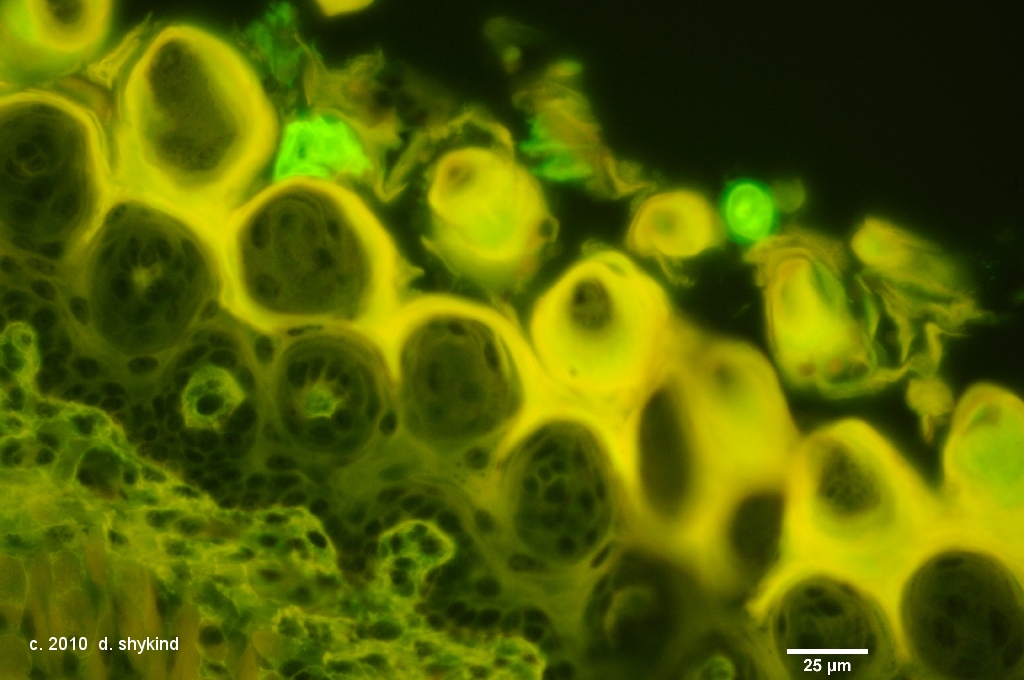 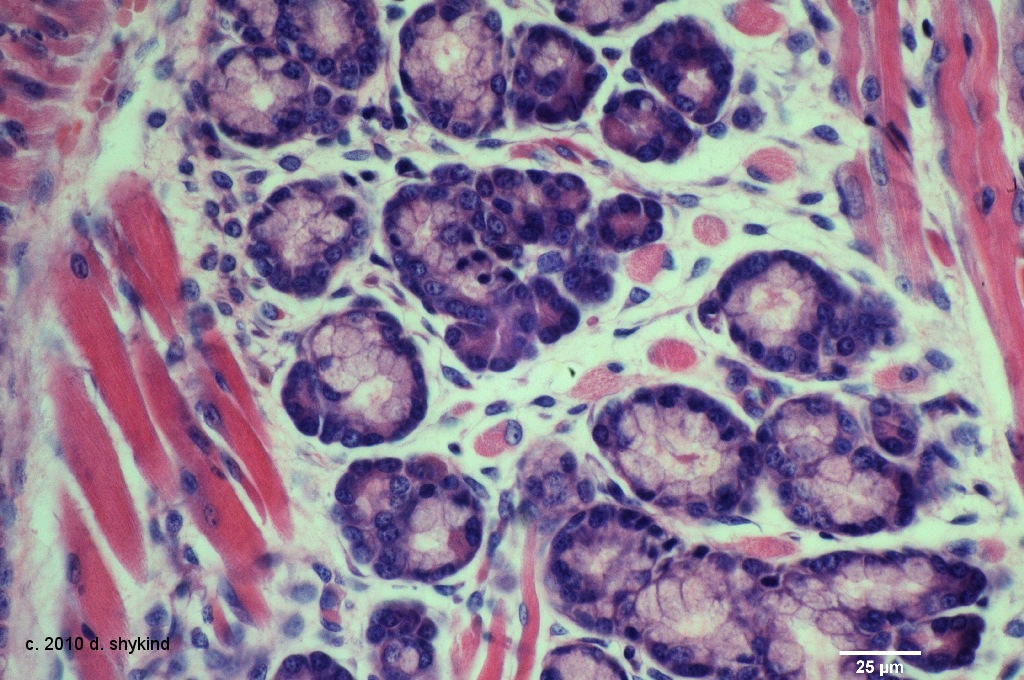 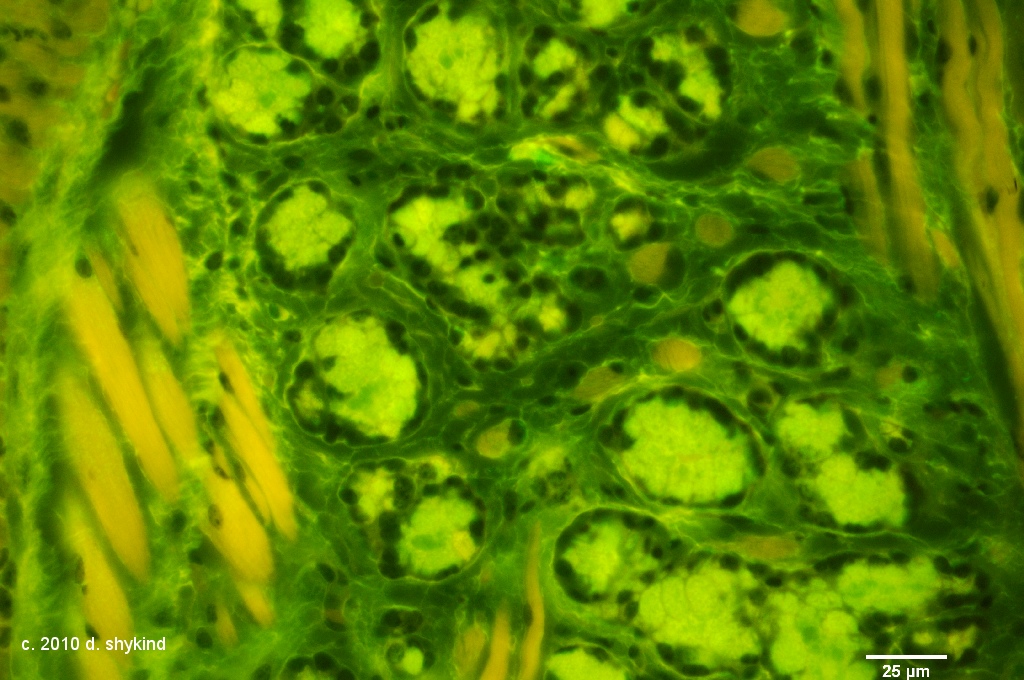 In some ways fluorescence reminds me of the "invisible inks" we played with as kids (and some of them actually were based on fluorescence!)

While I have never pursued it in microscopy, I love seeing how it can reveal details that us mere mortals can normally not perceive.

Like the way you've directly compared the two different lighting methods to show us the differences.
http://www.krebsmicro.com
Top

I have one or two more H and E fluorescence comparisons to show you, then I will break out the real dyes (and the double gloves, and safety glasses etc....) and make some "real" fluorescent preparations, with both cytoplasmic and nuclear staining. Time to make some protozoa glow.