The images were taken last winter, almost a year ago or there abouts now. When I first came across these I was unsure of exactly what they were, however, I photographed them just the same and collected a few samples. My reference for the identification comes from the Myxomycete Image Galleries which is quite an extensive gallery and if you do not have high speed DSL you will be refreshing the page quite often to get the complete download of images but its worth the wait if your interested in myxo's. 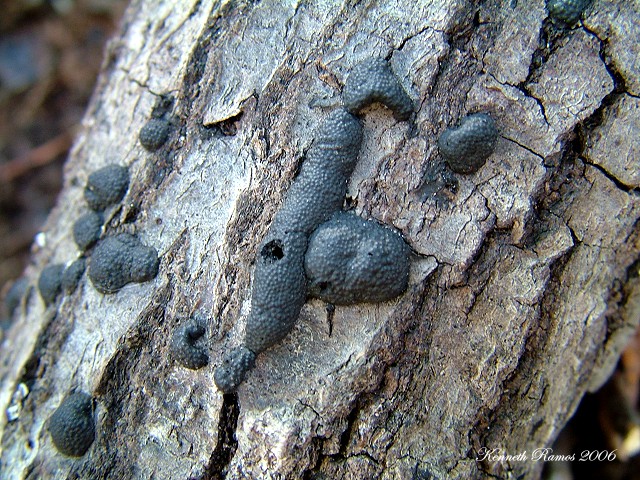 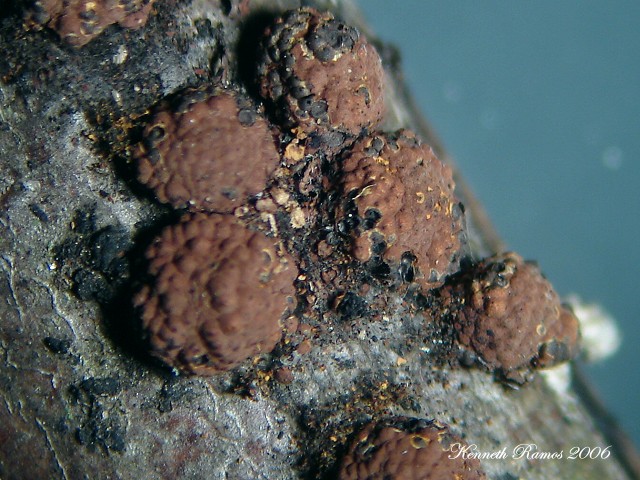 These are two images of different speceis of Tubifera to my thinking, however, I maybe or more than likely be wrong but as the man said, "Thats my story and I'm sticking to it."

From their crusty appearance one would not expect these to be myxomycetes, one might even ask themselves, "where is the beautiful and colorful fruiting bodies I have heard and read so much about?" Well, no one is perfect, not even myxo's.

Harmful for tree? Is it only affecting the surface?
The meaning of beauty is in sharing with others.

Myxo's cause no harm that I know of

. In some places the large plasmodiums are eaten by people. No, they just crawl around sprout fruiting bodies and then die, doing nothing any harm. Thanks Nikola

Ken,
I will be posting my own image of your upper subject in beautiful orange at a later time. Your lower subject is one I have never seen before. Good job!

, those were found during the late winter if I recall, which goes to show that hunting and studying myxo's does not end with the summer but they are harder to find during the winter and of course you will not find those with the colorful bodies until spring and warmer weather.

At present I am trying to grow my own. I have introduced into my rather small terrarium, a piece of substrate containing two or three dehiscent fruiting bodies. The soil is moist with plenty of decaying wood and fresh mosses growing about, along with a few small plants and bracket fungi. I have been keeping a watch on it however, if fungal filaments or hyphae begin to form in the soil they will attack the spores and prevent them from germinating, if indeed they attempt to do so. It has been a week now and things are still looking good in there, hopefully one day I may get a peak at a small plasmodium beginning to slowly crawl around on the provided substrate. I need to keep the soil damp but not overly so I think. Anyway it is going to be tricky I think to get a plasmodium to grow and fruit in a captive environment such as this.

Glad you found the link to be interesting there Cyclops. It has been quite useful along with the few publications that I have on myxo's.

Interesting shots for sure Ken. I was thinking of the same thing for my terrarium if I find any Myxomycetes. I was thinking I would try and spread the spores around a bit...to try and vary the substrate that they land on (wood, soil, drier, wetter).

I would assume that if the spores do not land on an environment that they like, they will not germinate (imagine if every spore germinated

I would assume that if the spores do not land on an environment that they like, they will not germinate (imagine if every spore germinated )

Glad that you brought that up Doug, a good point to be considered. I read somewhere that the environment in which the spores land is crucial to their germination and growth of the plasmodium. I am hoping that it is not so critical that we could not grow them in a controlled environment, well so to speak, I guess what I mean is in an enviornment other than that which nature has provided, trying to replicate the wild. As I said, I placed a bit of bark which had a few dehiscent bodies remaining on it in my little terrarium and I also took a small sewing needle, very fine, and gently probed one of the sporangia to get a few spores on the needle tip. I then gently spead them around the damp soil in my little terrarium. If I am not mistaken the soil should be kept pretty damp but not enough to turn to mud. The reason why I say this is that most of the myxo's I have found are on some really wet substrates, just by looking at the substrate the abundance of moisture that is present can clearly be decerned. I would also imagine that humidity and temperature are going to have to be taken into consideration also, along with the possibiltiy of developing fungal hyphae which can stop germination of the spores. A few things to be considered, to take a good hard look at and to keep an eye on.

With all that being said, I suppose our attempts to grow or culture them indoors is really going to be hit or miss I am afraid. Maybe, just maybe, we will get lucky. Its still not to late to find a few dehiscent fruiting bodies Doug, grab your hand lens and camera and hit the woods and don't forget to take along some gear for collecting specimens, such as a plastic sewing box with removable or adjustable partitions and a good sturdy pocket knife. You don't need a whole lot and if what you bring home isn't myxo's, then you will have something to research and ponder over. Maybe a new critter to add to a different terrarium, so that you do not introduce a destructive organism to your orchids