Periodically discussion pops up about what causes the colors in butterfly and moth wings.

There are basically two mechanisms that provide color: optical interference and pigments. Optical interference colors result from periodic structures that allow light of some wavelengths to reinforce, while other wavelengths cancel. They get talked about a lot because the colors tend to be vivid and shifting, and the mechanism is interesting. Pigments, on the other hand, get ignored because they're commonplace and boring.

One result is that it's easy to get the impression that most or maybe all of the colors in a butterfly wing are due to interference.

'Tain't so! In fact, pigment colors are far more common than inteference colors in butterfly and moth wings.

As a rule of thumb, if a color does not depend on the angle of illumination or view, then it's due to pigments. Shiny spots or iridescent colors that change with illumination and view are signs of interference.

A better test is to wet the wing with some volatile solvent and see what happens. Pigment-based colors just get a little darker and more intense as the solvent kills diffuse surface reflections, while interference colors generally change dramatically as the solvent temporarily saturates the periodic structures and destroys the interference.

I put together a sampler of local butterflies (and one moth) to illustrate. The left wing of each specimen is saturated with methyl alcohol, while the right side is dry and shows the normal appearance. 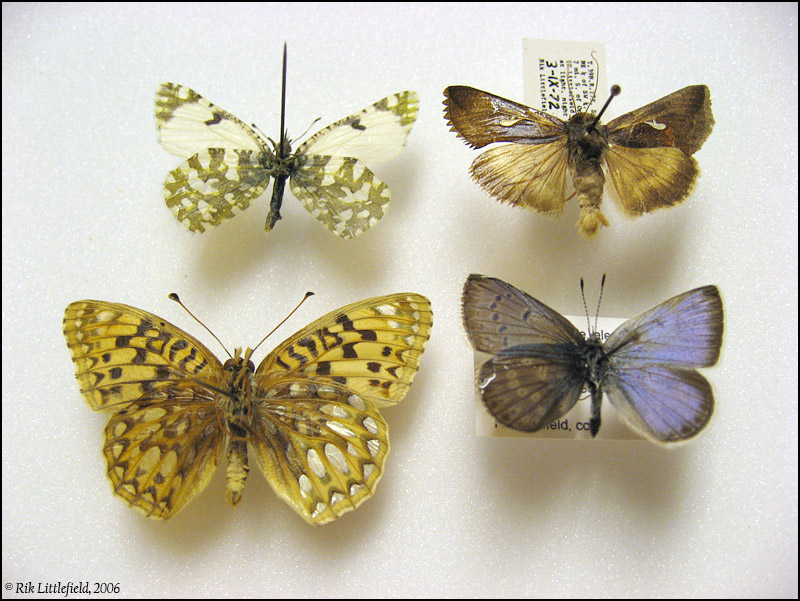 Notice that most of the left-side colors are just a little darker and more intense, indicating pigments. There are two obvious exceptions. One is the set of silvery spots on the Fritillary at lower left. When wet, the silvery spots become just a dull tan. The other exception is the beautiful blue coloration all over the wings of the little Blue at lower right. When wet, the opaque blue turns transparent brown, allowing the dark and light markings on the underside of the wing to show through. There is actually a third exception, but it's not apparent in this picture. That's the satin-white "Y" on the moth, which does become noticeably less shiny although it's a lot less dramatic than on the Fritillary.

Aside from the blue and the shiny spots, all the other colors are pigments. Even the white of the Marble at upper left does not become transparent when wet, due to the presence of a white pigment in the scales. (It's uric acid, if I recall correctly. A handy place to utilize what would otherwise be metabolic waste during the final metamorphosis.)

Hope this helps to clear things up!

I did read an article years ago as to whether what we call pigments actually were that colour or if it was simply the colour of light they reflected rather than absorbed, rather akin to the coatings on the front of a camera lens in that they appear to be the colours they reflect rather than their own, or the ones they allow through to the sensor of the camera.

I think it eventually did come to the conclusion that pigments, or most objects do have an inherent colour but that may not be quite what we see due to the wavelengths of light they also reflect rather than absorb. This is differen to diffraction gratings etc or those butterfly scales that cause interference.

Very interesting discussion Rik & Dave and a very good way of showing the difference Rik. The interference colors show up very nicely. Supposedly we have a long & short wave UV light source at the store (in the basement somewhere) I will have to try and dig them out and see if any of my butterflies react.
Take Nothing but Pictures--Leave Nothing but Footprints.
Doug Breda
Top

I think you're getting at the issue that's highlighted by the following exchange:

Question: What does the inside of a brick look like?

Answer: Can't tell. You have to break it open to find out, and then you're looking at the outside again.

If you dissolve the colored stuff in solvent, then the structure can change again, and (in rare cases) the structure and color can even change depending on what solvent you use.

When I say here that the structure changes, I'm not implying what the high school textbooks would call a "chemical reaction". There's no change needed in the covalent bonds -- the atoms that are strongly stuck together stay stuck together. What changes can be just weak things like hydrogen bonding.

Maybe it's also worth pointing out that biologists and engineers use the term "pigment" in subtly different ways. To an engineer designing an ink jet printer, there's a strong distinction between a "dye" and a "pigment" -- dyes dissolve down to individual molecules, pigments disperse as fine particles. But biologists seldom speak of "dyes" except as something used to stain prepared material -- to them a "pigment" is anything that confers color, regardless of how it's dispersed at the molecular level.

Whether a pigment is dispersed or not sometimes becomes evident when you try to look through a sample, instead of at it. If the pigments are aggregated into particles that are big enough to be essentially opaque, then what looks strongly colored in reflected light may appear largely color-free in brightfield transmission, when you see mostly the light that gets between the particles.

As an interesting little experiment, I backlighted the moth wing and photographed it dry and wet. Here are the results.

Based on these images, it seems that the pigments are pretty well dispersed. Either that or the light is bouncing around enough that we're seeing mostly reflected light in both cases.

The difference in exposure times is striking, though -- wetting the wing really does make a lot more light go through. I guess this is a well known effect, but I'm not sure that it's well understood. Certainly I don't understand it in any significant detail!