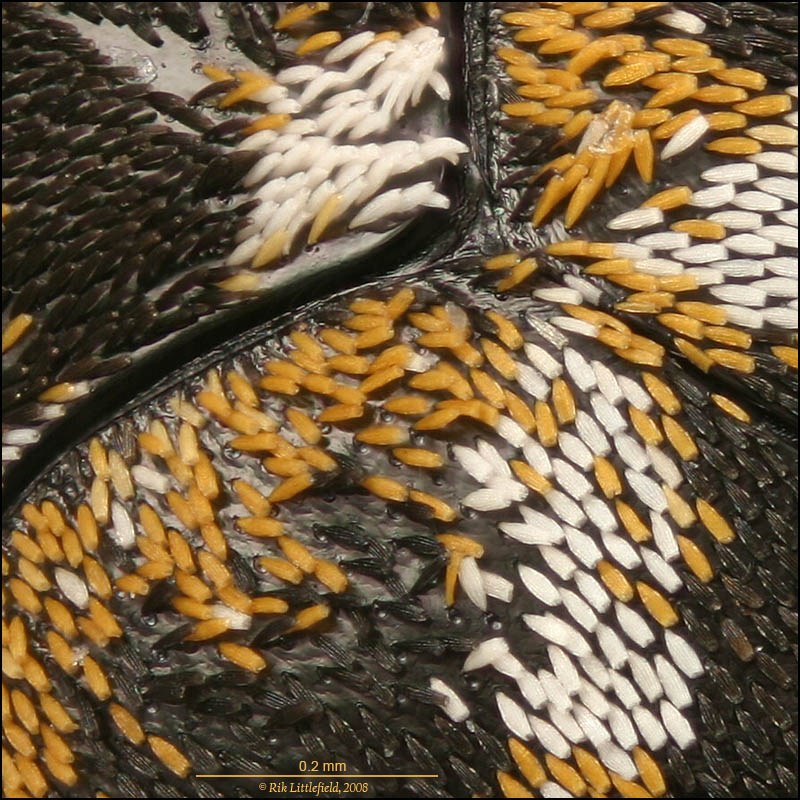 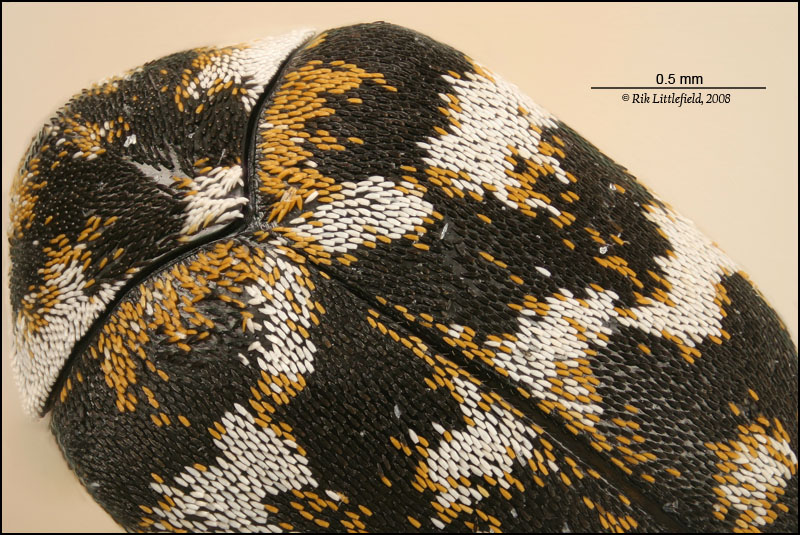 Very much like the one here, but slightly smaller and darker. I have no idea whether it's the same species.

I'm always fascinated by the concept of a beetle covered with scales.

The cleaning and mounting process for this specimen was a bit spartan: none. I picked it up carefully off the floor, set it on a microscope slide, and set that on my stacking rig which had been tipped up to vertical. If there's a bit of dust, well hey, these things do live in carpets.

Background is the piece of balsa that I normally use as a pinning base, seen here very OOF because it's so far away from the subject.

The top image is a crop from the bottom, reduced to 90% of actual pixels because I liked the composition of what I could fit in the forum's 800 pixels that way.

Quite an interesting little beetle there Rik, wonder what the purpose of all the scales?

Excellent photos Rik. Great detail. I wonder if the scales help it slip through the carpet threads.
Take Nothing but Pictures--Leave Nothing but Footprints.
Doug Breda
Top

Your work continues to amaze me. These images bring them to life. The detail is amazing.

I never knew beetles had scales. Do other beetles have these scales?

Rik,
Considering the size of those scales the detail is extraordinary! This highlights the importance of the measurement indicators. They allow us to fully appreciate just what we are looking at.

So you constructively - and with intent, tipped your whole rig (bench and all?) and then took 146 images for this stack? I hope you took a long-shot of that adventure?

Roy Patience wrote:I never knew beetles had scales. Do other beetles have these scales?

Most beetles are smooth at least on the top surface. A lot of beetles have hair on the underside. These carpet beetles have scales there too, rather like those on top except all one color, I think, but I haven't looked very carefully. One of my standard subjects the June Beetle has both hair on the bottom and flattened bristles sort of like scales on the top. Some other beetles have things like these too, like this snout beetle, but mostly to much less extent than the carpet beetles.


augusthouse wrote:Considering the size of those scales the detail is extraordinary! This highlights the importance of the measurement indicators. They allow us to fully appreciate just what we are looking at.

Yes, this lens is a real treat to work with. I shot a brief test with the Nikon CF N Plan Achro 10X NA 0.30, decided I wanted some more magnification, switched to a Edmund 20X NA 0.40 and shot another test, but decided to go back to the Nikon because I could get a lot more detail overall. The higher power wider aperture lens had a little better central resolution, I guess, but it also has a lot more CA and gets soft away from the center, whereas the Nikon holds up really well across the entire frame. The Nikon also has a lot more working distance, so it's safer and easier to illuminate around. I suspect I won't be using that 20X very much anymore for this sort of work.


So you constructively - and with intent, tipped your whole rig (bench and all?) and then took 146 images for this stack? I hope you took a long-shot of that adventure?

All that wood and metal was designed to allow tipping up, and the 146 images was not all that painful. Image file timestamps show 15 minutes to shoot the stack, right at 6 seconds per image overall. That's not bad, considering each image involves gripping the dial, turning the dial, removing the hand, pressing the expose button, then waiting 1.5 seconds for mirror lockup and 1 second for exposure. I'd rather have that all automated -- just set it up, start the sequence, and walk away while a heavily geared stepper motor turns the screw and an electronic switch triggers the camera. It wouldn't cut the time all that much, but it would be a lot more reliable and a little less boring/frustrating. But as always when I actually look at the numbers, it turns out that most of the time goes into activities other than actually shooting the stack.

I did not, however, shoot a picture of the setup. Although it's designed to allow tipping up, the rig looks so ludicrously overbalanced in that posture that I can hardly stand to look at it myself, let alone allow anyone else to see the monstrosity.

Edit: added links to other beetles with scales.
Top 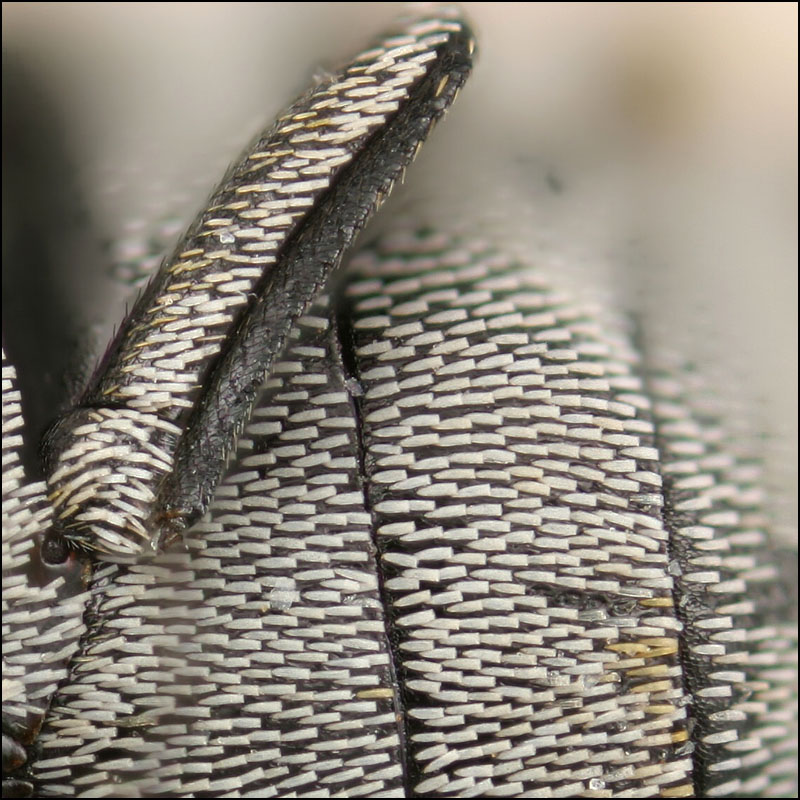 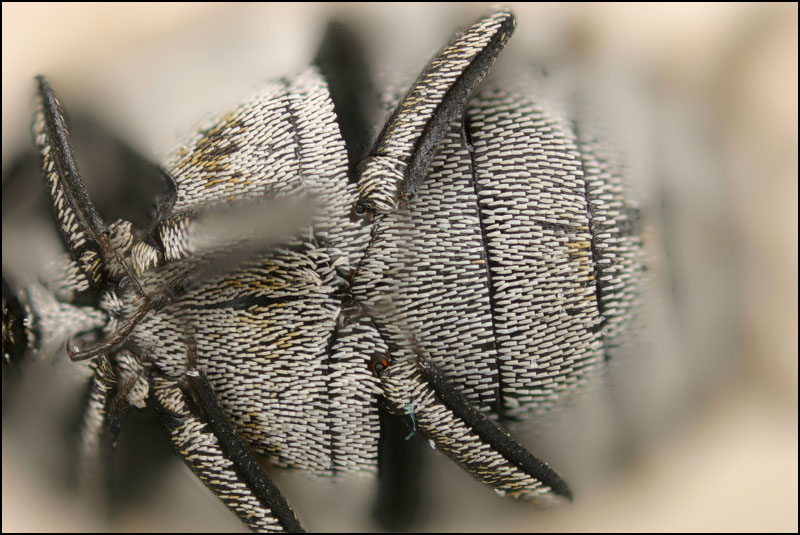 Here's what the underside of this specimen looks like. These are from a short stack, 49 frames, 4 minutes to shoot. The crop is at 70% of actual pixels, hence about 80% of the scale of the first picture in this topic.

Craig, I finally relented and shot a picture of the setup. It's over in the Technique forum, here.

Checking that out now!

Looking at the image above, those details just at the top of the hind legs are interesting. They look like small ball-joints; but they also give the impression that the beetle has an underside defensive 'face' if you consider them as false eyes (then again, I assuming they are false!).