Pallas Athena, up close and ready to kiss!

Pallas Athena, up close and ready to kiss! 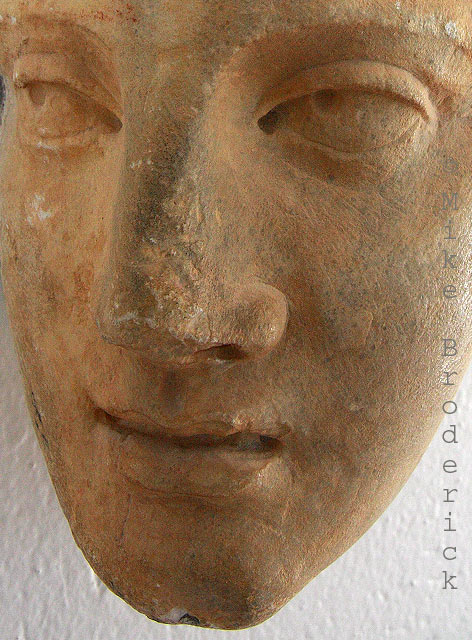 After Rik's questions, I went back and looked at my other shots of Ms. Athena, and found this one. The right side of her head was attached to the wall, so the natural shot was a profile similar to the one I posted yesterday, but I'd moved in close and shot from the side to get this frontal view. What's interesting about this is (in addition to making even more obvious to me her severe complexion problems, especially on her left cheek) that the two sides of her face have aged quite differently. Presumably one side was buried, and one side was exposued. Only question is, is the side that is more damaged, the buried one or the exposed one?

This shot was basically same conditions and settings as the previous one, but I used levels here (I'd neglected to include that step when I cropped the shot I posted yesterday) so that this one looks peppier and more contrasty. Again, this is a substantial crop of the original shot with the not-ready-for-macro 17-55 IS lens.
Mike Broderick
Oklahoma City, OK, USA

Interesting info & observations, Mike. I'm pretty naive about ancient sculpture, but another possibility is she was buried on her side. Upper and lower surfaces could be exposed to quite different moisture conditions, depending on soil type, rainfall, etc.

One other thing I notice in this shot is that the hollowed pupils in the eyes are quite definite. In the other shot, the pupil barely shows, and it's so close to the upper lid that I wasn't quite sure what I was seeing. Do you know if it's traditional for these goddesses to be posed looking up at something?

That lighting again is working well Mike. Seems to show the textures and fine lines up just great. It even wreaks history. Nice closeup view Mike.

All the best up and beyond, nice shooting.

rjlittlefield wrote: Do you know if it's traditional for these goddesses to be posed looking up at something?

I didn't know the answer to this, so did a bit of research. The short answer is that I can't find anything to indicate that it is typical. I had photos of a few other deities (in statue form!) from this trip, and most didn't have pupils in their eyes (I assume they were originally painted on), and the couple that did have pupils had them positioned normally.

I did a bit of googling, and found that according to Wikipedia, Athena is typically shown with deeply-set eyes in sculpture, but nothing about them being upturned. I did find one intriguing reference I couldn't follow up on:

In Hellenistic invention, the motif of the goddess' gaze is transformed; the image of the maiden Athena is said to have turned its eyes upward in shock and ...

The phrase above appears in the Google listing for this link:

It is a search engine link to a 1988 article in a classical journal, but I don't have access to JSTORS, the article service , that would let me read the article! No idea if it is related to the eyes on the statue here. Good question, and I read some interesting stuff trying to puzzle out an answer since I didn't know it!
Mike Broderick
Oklahoma City, OK, USA