It just gets more confusing!!

It just gets more confusing!!

I have been totally confused with the whole mopane worm story. One of our local people found and showed me this and he says it is what they call mopane worms and the one they eat.
Maybe they are all mopane worms, but just in different stages? Who knows.

Anyway, I have brought this one home too and will wait until it hatches someday, taking pictures as I go, to get a proper id on it. 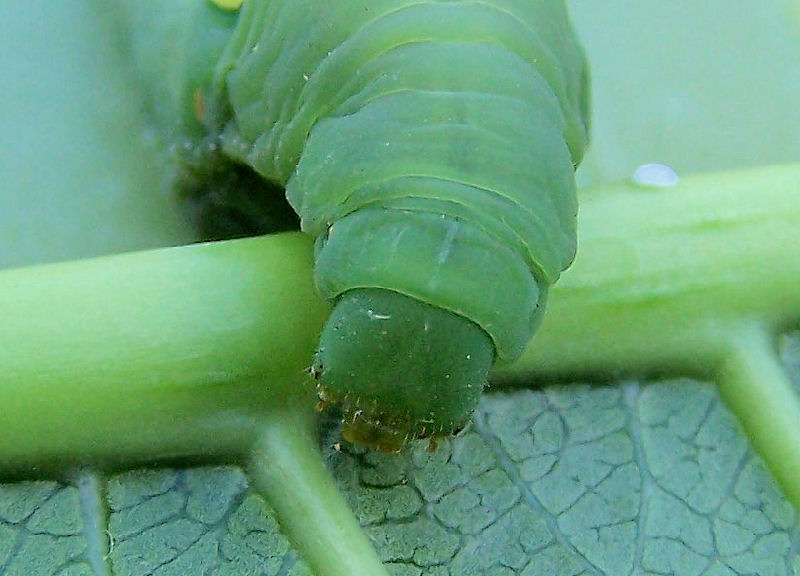 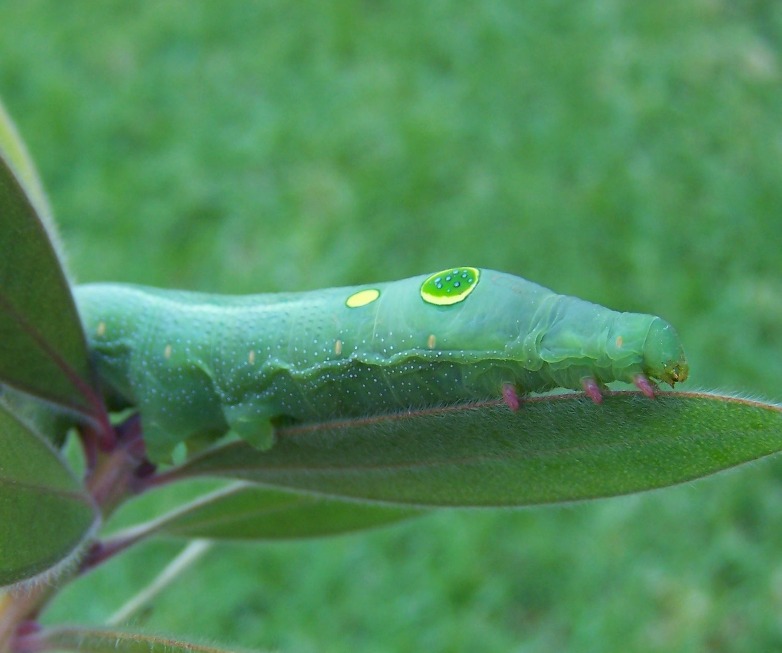 Joan, I'm getting a kick out of how this story is developing!

I had never heard of a "mopane worm" until you posted your first photo and I tracked the beast down with some Google queries. At that point, everything I read was talking about various species of Gonimbrasia. But what you have here looks like something completely different, not another stage of the same beast.

Perhaps "mopane worm" is the same situation -- that is, it just means a worm that is commonly found on mopane. I notice in searching Google images for "mopane worm" that most of them are black/white/red and spiny like the first one you had, but bright green ones turn up too, for example on this page. Perhaps a regional expert could tell us more about what all is meant by the term. I have written to one of them, and will let you know what I find out.

In any case, I sure am looking forward to seeing what these caterpillars turn into!

I suspect you are right about it being like the milkweed beetle Rik. I just hope we do not have to wait too long before we see what it turns into. I will keep you posted on development. I must say this looks more like the mopane moth than the blue / white / black one posted earlier, as the moth also has these eyes on the wings like the caterpiller here.

JoanYoung wrote:I must say this looks more like the mopane moth than the blue / white / black one posted earlier, as the moth also has these eyes on the wings like the caterpiller here.

The pattern of this caterpillar follows the common "snake mimic" motif -- smooth and green with two big "eyespots" on some enlarged segment near the front. It's a favorite tactic among the swallowtails -- not to say that this is a swallowtail, though!

I notice that these eyespots seem to be on the first abdominal segment, where I seem to recall that swallowtails put them on a thoracic segment.

Thanks for that bit of info Rik. But it is a cute one nevertheless with his spots. I was just thinking, if after all this it turns out to be an insignificant, ugly brown moth, and it flies away before I can get a proper shot of it, I will be annoyed.

The eyespots are pretty cool!

I still say you should stick these guys in a frying pan and have a worm fry!

Thanks Mike. Remind me not to take you along on a field trip, you will be eating all my subjects before I can take pics of them.

JoanYoung wrote:Thanks Mike. Remind me not to take you along on a field trip, you will be eating all my subjects before I can take pics of them.

Frankly, I think the idea of eating insects is disgusting! On the other hand, I did eat "lamb fries" one time only:

(and I had them at the Krebs as mentioned in the article!)
Mike Broderick
Oklahoma City, OK, USA

Well you have more guts than I do Mike...I would not try anything like that even if my life depended on it....I would rather eat grass and leaves!!!

I bet there is a lot of green bug juice in that cat...yum. I tried meal worm beetle larva one time. Not really that bad. A nutty taste with a crunchy outer coating. I think it was a super meal worm also.

I also tried some chocolate covered insects (ants, baby bees, baby grasshoppers) I bought in a German deli in New York years ago, but they tasted like Nestles Crunch bars. We also eat the dreaded black flies the come out in the spring here in New Hampshire, not because we want too, there are just so many looking to bite you, you always suck in a few just breathing

We also eat the dreaded black flies the come out in the spring here in New Hampshire, not because we want too, there are just so many looking to bite you, you always suck in a few just breathing

Had a few of those myself Doug!

Well during jungle environmental survival training we ate...well we won't get into that. Lets just say I failed "Insects 101."

As I said to Mike, I will stick to grass and leave thank you!!
Joan Young
Top

I sent a few emails to regional experts about these caterpillars.

What's coming back is very consistent with the interpretation that a "mopane worm" is any big caterpillar that eats mopane.

I haven't seen any of the two photos on the sites. However, the black one is close to what I know. We have the green ones in the Gynanisa maia species.

He forwarded images of a couple of pages from a CASS publication (Centre for Applied Social Sciences at the University of Zimbabwe) by P.A. Hobane: The gathering, processing, consumption and Trade of edible caterpillars in Bulilimamangwe district.

Searching on these terms, plus Goninbrasia belina, will turn up more information than you probably ever wanted to know, though it may still not be enough to tell exactly what these caterpillars are.

The snippet of information that I found most interesting is from http://nationalzoo.si.edu/publications/ ... nsects.cfm :

...everyone in the region collected, processed, and roasted two main caterpillar species—the orange-spiked, black-bodied Gonimbrasia belina, and the fleshy green Gynanisa maia, both known locally as Matondo—and served them fried or in stews.

What's in a name? Beats me. As far as I know, "Matondo" could just mean "big edible caterpillars"!

But yeah, these smooth green caterpillars are definitely a different species from the spiky black ones. The adults of both Goninbrasia and Gynanisa are large moths, mostly with big eyespots on their wings. I'll be very interested to see exactly what Joan's look like.

Hi Rik,
That is an extremely interesting link you added here. Thanks for it. I will find out the exact meaning of "matondo" for us on Monday and post it, I have an idea it just means "worm".
I am watching the pupa I have but nothing is happening sofar. I do know know if it is still alive or if it will only hatch next spring. I will definitely keep you posted on it as I am as curious as you are to see what comes out of it.

Thanks for taking the time and effort into trying to find out more about the Mopani Worms.
Joan Young
Top
Post Reply Previous topicNext topic
24 posts