Crop from a Kodachrome 64 slide; just the out-of-focus part cropped. 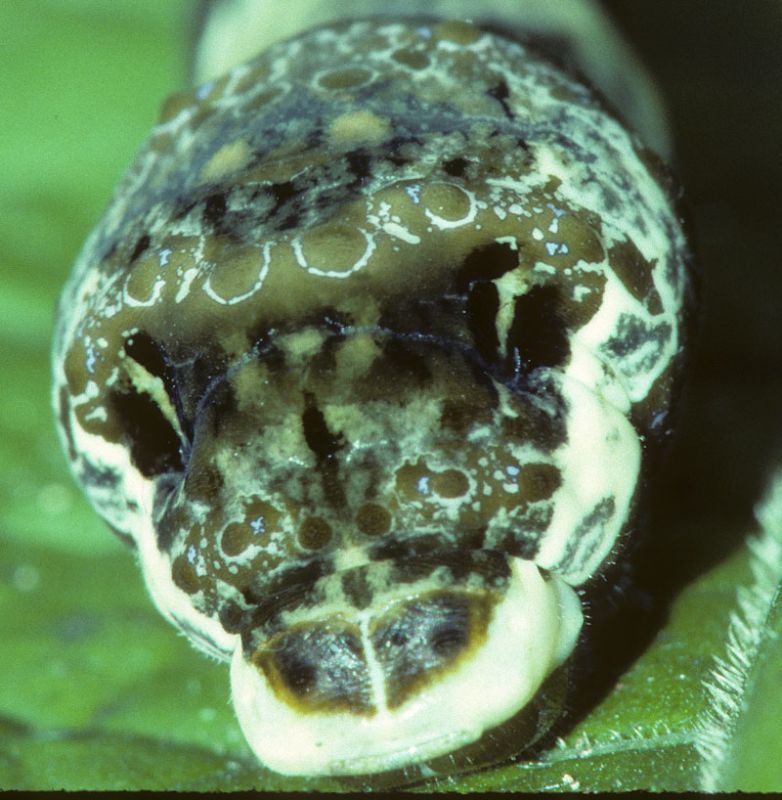 Seems quick Rik hasn´t popped in yet, so I will have a go first then.

Is it one of those caterpillars that are mimicing bird droppings?

edited my last sentence by adding "that are" to avoid any ambiguities.

Seems no one else is willing to have a go.

I propose that it's the head & thorax of a swallowtail butterfly caterpillar, but (at this stage) not one of the poop-mimics.

Points for Planopo, few more for Rik.
It is, indeed, an Orange Dog - presumably because they eat citrus leaves in Florida.
Caterpillar of a Giant Swallowtail ( Papilio cresphontes); grows to ca. 6 cm.
This shot is mostly of the thorax, the head is the small horizontal brown strip at extreme bottonm of the slide.
Supposedly mimics a snake, the circles resembling scales and the black and yellow areas on the sides are the snake's eyes

Oh dang, there was a quiz and I missed full credit by just that much!

But really, I think Betty should get the same points as me.

If one Googles on cresphontes mimic, most of what comes back credits cresphontes as being a bird dropping mimic. In fact in our own forums there is a topic titled "bird dropping mimic" that shows a pretty convincing picture of cresphontes in exactly that role. I generally see "snake mimic" being credited to the Tiger Swallowtails, which have two prominent eyespots on the thorax and no similarity at all to bird droppings, at least in their later stages. (All the swallowtails I know look like bird droppings in their early stages.)

I thought I recognized the general form of a swallowtail caterpillar, and hoping to pin it down, I actually did a Google image search on giant swallowtail caterpillar. That returned a lot of pictures of cresphontes, but I couldn't match what I saw in those images against what I see in this topic. So I guessed that this was some other swallowtail that I just wasn't familiar with. It didn't occur to me at the time to check our own forum.

If I had, I would have discovered the topic linked above, whose image details match quite well except for color shift. Then I would have been really confused, given the response to Betty!

PS. I post discussions like this because I find it interesting to think about the process of searching and analyzing images. I hope they are not too painful to people who are just interested in the images and the subjects they show!

Some people have all the luck... whenever I look closely at things that look like bird droppings... well... that's what they are

Hey Rik:
You're lucky you got any points

. I was looking for a complete answer: species. instar, locality, time of day, camera used , lens used, f-stop, shutter speed, etc.
Reply to Betty was a No and a wink.
Dorsally and laterally these larvae are said to resemble bird droppings, but head on they become snake mimics with scales and eyes. See, e.g.,:Wagner, D.L. 2005. Caterpillars of Eastern North America. Princeton University Press. 512pp.
Top

I had a feeling it was some kind of caterpiller but I would not have been able to even give you a family. I will have to start looking at bird poop

Don't have that book, sorry. Hey, I'm curious about how and how well the concepts of "mimicry" have been checked out in this case. I vaguely recall seeing some studies testing the poop theory by seeing whether birds would even investigate things that looked to people like droppings. They wouldn't, so that theory held up pretty well. But I don't recall seeing tests of how birds react to these things that look to people like snakes. Maybe you know the literature and could point me to something?

. That was what made me go with swallowtail caterpillar but throw in the caveat, "at this stage". The confusion would have come if I had positively matched against late-instar cresphontes, which is widely described as a poop-mimic, but you were saying this thing wasn't a poop-mimic so it couldn't be cresphontes. I guess probably I would have ended up saying the same thing I did.

rjlittlefield wrote: But I don't recall seeing tests of how birds react to these things that look to people like snakes. Maybe you know the literature and could point me to something?
--Rik

I hear what your saying. I have not seen original data to back up the claim but the snake-mimicry explanation is repeated in several texts. One text is by the very respected Malcolm Scoble "The Lepidoptera Form, Function and Diversity". Oxford University Press. 1995. 404pp.
In defence of the snake-mimicry theory, why would a bird-dropping stick out and wave a forked tongue when disturbed? seems like that would defeat the purpose of it being an inanimate object.
The forked tongue in this case is called an Osmeterium (for the non-lepidopterists amongst us).

If I had shown a dorsal or lateral view then bird dropping mimic would have been correct. I purposely showed an anterior view.
Top

Two good points there. Nothing to say it can't mimic one thing from one standpoint, and something else from another.