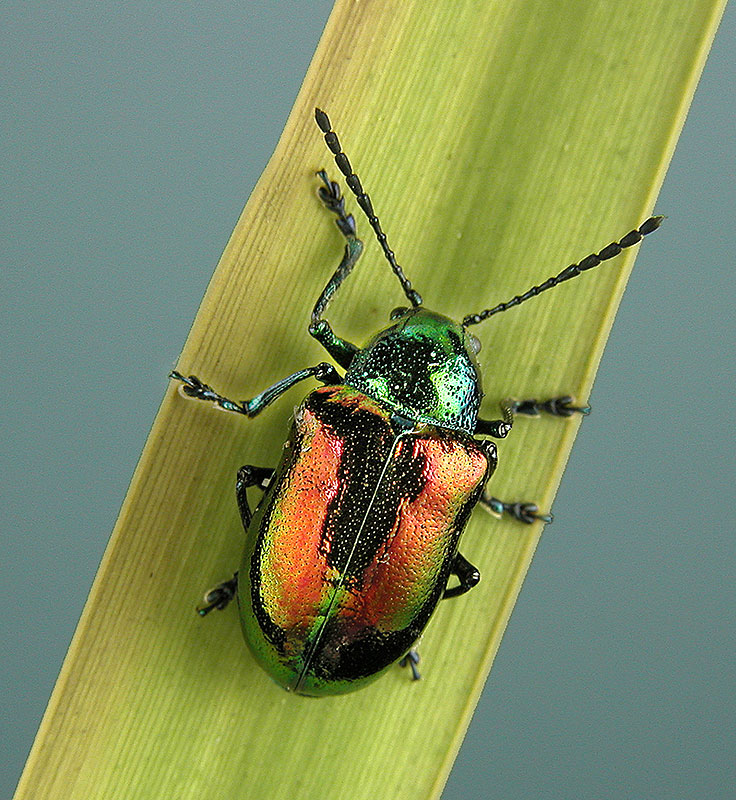 You know I don't know if I would have thought to photograph the beetle at an angle or straight up and down as Cyclops mentioned but anyway the angled shot does make for some nice composition. Pretty nice shot there Tony

Good job on the lighting, too. The directional but diffused lighting that's used here does a great job of conveying "shiny", even if the title had not said so.

Thanks for specifying the camera along with the other info, Tony.

So that's why I am getting such a good DOF, for certain size of bugs this 5700 seems as good as my SLR's. I had a Coolpix 995 (or something like that) which had an f11 setting; so that's why that camera gave me great images.
Top

Tony T wrote:So that's why I am getting such a good DOF, for certain size of bugs this 5700 seems as good as my SLR's. I had a Coolpix 995 (or something like that) which had an f11 setting; so that's why that camera gave me great images.

For small subjects and small apertures, there is no advantage to larger formats except for reduced image noise IF you're prepared to use a longer exposure or brighter illumination that allows the camera to capture more light. The big win for larger formats is with larger subjects that permit wider diameter apertures, which simply cannot be achieved with the short-focus lenses that go along with small formats.

You mean you never did composition in basic photography Ken, with leading lines, "S" curves, rule of thirds, aerial perspective and diagonals etc?

By the way you can cheat anyway now because you can rotate the crop in post processing to get the stem on a diagonal, even if not taken that way originally!

DaveW wrote: By the way you can cheat anyway now because you can rotate the crop in post processing to get the stem on a diagonal, even if not taken that way originally!

I'm confused. If an insect is sitting vertically on a vertical blade of grass then it is legitimate to rotate your camera 45 degrees and snap the photo - this is honest? But rotating an image in Photoshop from the vertical to a diagonal is dishonest and cheating? I'd love to hear your rationale.
Top

Both are as legitimate as each other, because in neither case did it indicate reality regarding their orientation. If you tilt the camera you do not show the frame equally tilted on your screen or print so there is no real difference in tilting it in post processing, and angling cameras has been done since the start of photography.

I suppose only those who first level their cameras to get them horizontal with a spirit level on a tripod can claim they are portraying true orientation, and few of us do that!

My point was you no longer have to go to the trouble now of angling the camera at the taking stage, you can simply get the same effect in post processing by rotating the image, and yes, this was even done in black and white film days with the enlarger by simply rotating the masking frame.

DaveW wrote:By the way you can cheat

My question was with why you chose to use the word "cheat", the word smacks at dishonesty.
Top

"Cheat" was used in the sense that you could do it in arrears if you forgot to do it at the time. Sort of a second chance to get it right!

DaveW wrote:if you forgot to do it at the time

Not to jump on Dave here, but "forgot" also has negative connotations.

There is a purist school of photography that believes all composition should be done in the camera. In that school, rotation is a complete no-no, and cropping is limited to at most a single dimension, in grudging acknowledgement that the best aspect ratio for a photo may not be how the film or sensor happened to be manufactured.

Personally, I'd hate to admit that I can't do any better than my first attempt, so I treat after-the-exposure rotation and cropping as deliberate technique. I will often shoot a wider area than I ever intend to use, planning to choose the final composition when time and resources allow to do the best job, instead of the best job before the bug moves.

So in my case, it's not "forgot to do it at the time", but rather "refused to box myself into a corner unnecessarily".

I was originally replying to Ken who said:-

"You know I don't know if I would have thought to photograph the beetle at an angle or straight up and down as Cyclops mentioned."

I implied he could always cheat when he realised that and do it in arrears.

I agree cropping on the computer with a larger image is always easier than in camera. Though purists would say this should be minimal as you are wasting pixels, hence resolution.

DaveW wrote:I agree cropping on the computer with a larger image is always easier than in camera.


For me the issue has little to do with the size of the image; it's when do I have time to make a proper decision?

With a live bug, that time is constrained by lots of factors ranging from how jumpy the bug is, to how uncomfortable I am kneeling on a sharp rock.


Though purists would say this should be minimal as you are wasting pixels, hence resolution.

Not much disagreement there.* It's just one of many tradeoffs to make.

As I'm sure you've noticed before, I adhere to the school of Pragmatism: do whatever you can to maximize the expected value of the image. Value depends on the audience. If I were submitting my work to be evaluated by Purists, then of course I'd crank up the importance of composing in camera. But generally that's not the case, and I'm only concerned with what the final image looks like.

Tony's image looks great here in the forum. Whether the leaf was leaning, or the camera was canted, or the image was rotated in Photoshop, are questions that just wouldn't cross my mind.

However, the observation that it looks good like this is quite valuable, if it helps other people improve their images too.

*Worth noting... With single shots of small subjects, it's not unusual to be stopped down far enough that there are more pixels than needed, due to diffraction. In that case, starting from a somewhat larger field and cropping/resizing does not cut resolution either. And of course if your end goal is small prints or web display, your camera has way more pixels than you can really use anyway.
Top

An excellent photo Tony. One of my favorite local beetles to find also. The DOF on this shot is fantastic.
Take Nothing but Pictures--Leave Nothing but Footprints.
Doug Breda
Top
Post Reply Previous topicNext topic
15 posts • Page 1 of 1