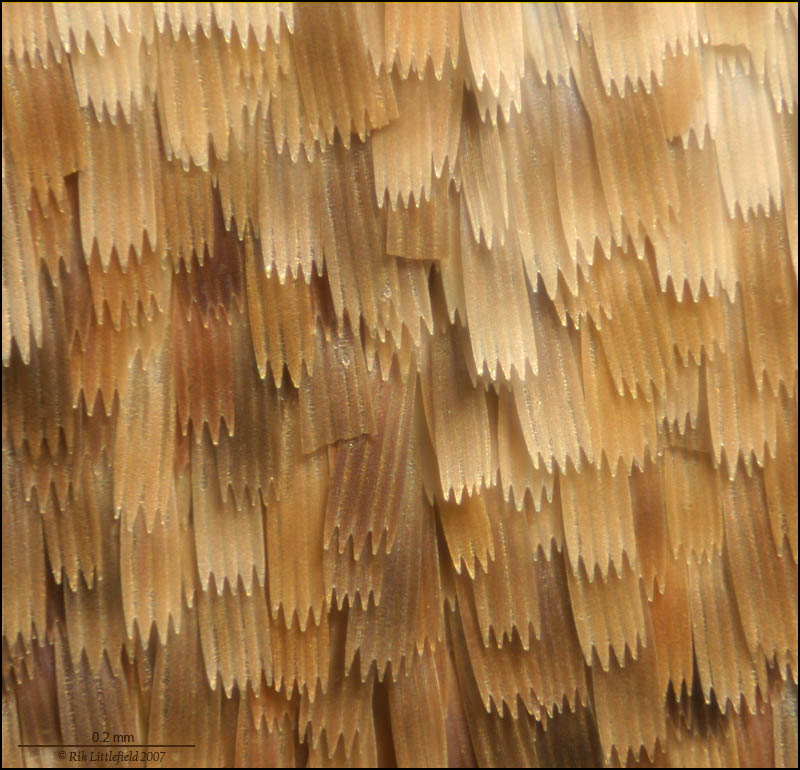 This image turned up while I was testing a mod to my stacking setup this evening. It's a little bit of the front wing of Noctua pronuba, the Large Yellow Underwing.

The only thing that's unusual about this picture is that I can't recall ever seeing a stubbed-off scale like those two near image center. I suppose I could worry about that, but... well, OK, actually, I already have worried about that, but just because I've wasted several minutes exploring the web page of the Journal of Irreproducible Results doesn't mean I have to waste your time telling you about it.

Hope you enjoy the picture.

Hmm...maybe something went wrong in the manufacturing design of those two scales and they just simply broken off, though I have never noticed anything like them myself either but is not oftent that I get to ponder over wing scales. What does catch my eye is the fact that there is no scattering of light off the scales and one can get a better look a them, good job Rik

Great texture and clarity,Rik. The stacking worked perfectly. What magnification were you at? Journal of Irreproducible Results? How did you find such a site?

... and they don't appear to be the only (incomplete) ones, either.

Thanks for the comments & questions, folks!

Irwin, the Journal of Irreproducible Results lives at http://www.jir.com . I found it with Google, of course. The reason I looked it up is that I recalled decades ago seeing them publish a not-to-be-repeated scanning electron micrograph showing a salt crystal neatly nested in the bowl of a red blood cell! Other than seeing the name once in a while, I've had no contact with JIR since then. What I discovered last night is that the Journal now seems to be focused on deliberate humor, especially parody, rather than a place to highlight quirks of accident. I suppose that has always been the case, and I simply got the wrong impression from the title and the single article/photo that I had seen. Ah, the dangers of "first impressions"!

About the magnification... There's a scale bar in lower left corner. Lens magnification onto the sensor was 16.2X, determined by measuring the image of a micrometer slide that I shot after I put the moth away. Final magnification as shown on my monitor is about 230X.

DaveW, you're right, they're "just" broken scales. But broken scales are new are to me. For example I cannot find a single one in scanning my 24" square display print of the entire wing of an Autographa moth, shown at this post. In my experience, scales come off very easily, but they don't break. So these attract my attention.

pp, good eyes! You're right, there are a bunch more than I noticed last night.

Looking through other photos, not shown here, I'm pretty sure I know what happened.

In early photos of this area, there are no stubbed-off scales, but there's quite a bit of dust. In later photos, there's no dust, but the stubbed-off scales appear. In between, the moth got blown off with a CO2 duster.

This is real close to a "smoking gun". Somehow the gas stream from the duster must have generated enough tiny turbulence to tear off the scale tips, without generating enough larger turbulence to break their attachments to the wing membrane. Fascinating -- and a warning for future cleanings!

This morning I put the moth back under a scope for direct inspection. It took a while to find this exact spot again, but finally I got it. Then I searched outward to see how large of an area contained broken scales. What I discovered was that it's quite a local effect. There are some other broken scales within a few millimeters of these, but most of the wing appears to be pristine.

Thinking back to how I did the dusting, I realize that at one point I directed the gas stream across the scales instead of along their length. ("Across" means right-to-left in this image; "along" would be top-to-bottom.) For that angle, this particular batch of scales would have been just "over the ridge" of a prominent wing vein. So I speculate that this damage was done by small but intense eddies formed on the lee side of the ridge. Again, fascinating, and a good lesson on what not do to with a valuable specimen (which this one was not!).

I think I'll change the title of the topic to match.

Ken, you can credit the pingpong ball diffuser for the quality of light.

A couple of thoughts whilst looking at this pic again ... any idea how thick these scales are and what does their cross-section look like?

Re the second - am wondering something like (very) high aspect ratio elipses joined by 'webbing' ... or something even more 'aerodynamic'?

(be an interesting job trying to weigh a single scale too, I'd imagine

I have not looked at these scales at any higher magnification.

You can get a lot of info about other scales by searching Google images for word combos like SEM butterfly scales.

One page that pops right up is http://www.nanotechnology.hu/online/200 ... index.html, which shows the huge difference in structure between two closely related butterflies, one of which appears brown while the other is bright blue due to photonic crystal effects.