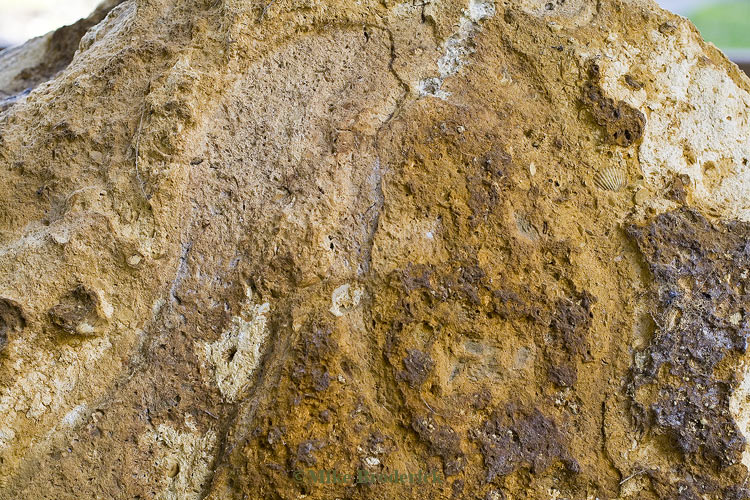 If you follow such things at all, you're familiar with Indians in Central America and South American making offerings to carved stone tablets known as stelai (singular is stele). This behavior isn't known in what is now the Eastern United States, except in one place. At Crystal River, on the West Coast of Florida, two modest-sized stones were erected as stelai about 440 AD, and one of them has carvings on it. Remains of sacrifices have been found at both. This is the larger of the two rocks, it is limestone and has the face of an Indian carved into it. It looks very crude and cartoonish now, but probably looked better before 1500 years of corrosion of the limestone from rain that was somewhat acidic even before men started pumping sulfur into the air! Main thing visible to me is a cartoon of a face, and the long lock of hair to our left of the face. The site curators say that you can see a round earring similar to those that have been found in the area, but I can't find it!

I'd be very curious what the worshipers thought of the stone "clamshell" that is fossilized next to the face. I'm sure they recognized it for what it was. I have a book about Native Americans and fossils, I don't recall this being mentioned, but will have to get the book out and see what I can find.

Thank you for this interesting and informative post Mike.

I have been interested in Native American customs and traditions for many years and find it a fascinating subject.
Joan Young
Top

Hi Mike, I see 4 possible faces. I think I know which one you're talking about. Thanks for the info and that's a great shot!!!

For the life of me I can just make out a resemblence of a face, let along a hank of hair and an earing.

What I do find interesting is the fact that acid rain was around back then.

nice shot mike, we have indian paintings all over here. i found faded pink and orange circles in the mountains had to be extremely old and man made. also a foot was painted too but really faded off the rock. not as much as yours though.
Jordan L. photo southern california.
Top
Post Reply Previous topicNext topic
5 posts • Page 1 of 1