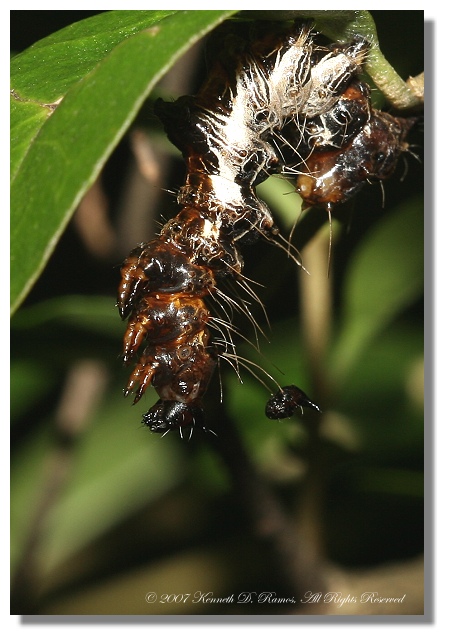 Is that white mass fungal spores do you think? It looks a bit different from some of your earlier Cordyceps postings ...is the fungus species specific do you know?

Is that white mass fungal spores do you think? It looks a bit different from some of your earlier Cordyceps postings ...is the fungus species specific do you know?

The white mass is probably fungal hyphae, the spores themselves will erupt from the stroma, which is what appears to be eminating from just to the right of the head in the photograph or above the head in relation to the caterpillar. I do know that yesterday this was a Banded Tussock Moth caterpillar or I am assuming it was the same one I photographed yesterday.

Here is a before shot of it in the same location approx. 24hrs before. 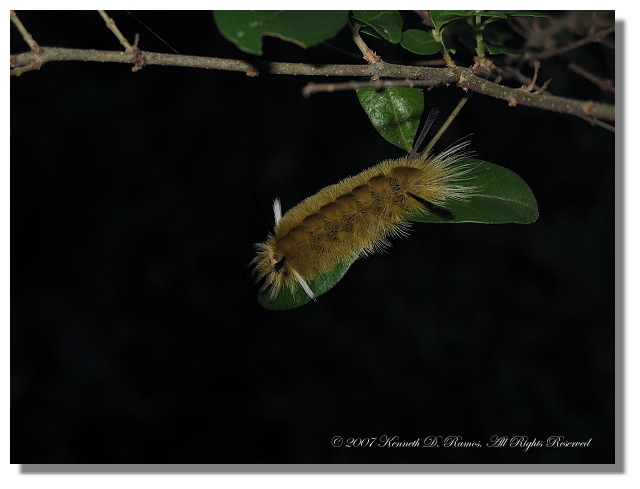 This was taken yesterday and of course the one above today. Same caterpillar same location, again if this is indeed the same cat, which I believe it is. So, if this is indeed cordyceps, it ravished the cat very quickly in a 24hr. period. Cordyceps are species specific. There is a different one or moths, ants, spiders, grasshoppers and at least two I know of for caterpillars, along with many other species of the fungi. Hope this thing doesn't ever mutate while the spores are in haploid (1n) stages. It could have been that that leaf was covered with spores or maybe the cat came into contact with them somewhere else, which is what I am thinking

Thanks for the added info Ken. Wow just 24 hours - that sure is working fast ....and yes I see the stroma now you've pointed it out.

Will you be able to photograph it again to record further developments?

There probably will not be any further changes or at least I think not. I have photographed infected cats in the past and they pretty much stay the same as what you see here. However this evening I thought that if the remnants of the cat are still there tomorrow when I get home from work, I may just cut the twig off and bring it inside for a shot or two under the stereomicroscope to try and confirm that the cordyceps fungi is probably the etiological agent. As for what species of cordyceps, only spore examination would reveal that I am thinking and of course that means oil immersion objectives and hoping to find at least a spore mass from the stroma. I have tried that in the past with infected ants and had no luck at all. To further complicate things, I have no ideas as to what characteristics the spores would have, in releation to a specific cordyceps species. Anyway it is as they say, "its not about the destination but all about the journy."

Excellent find Ken. You always seem to capture the best cool-dyceps pictures. I have found a lot of bluebottle flies this year with the fungus in my garden, especially around where the garbage can is always located which would be a logical location for a good fly infestation. I counted eight flies on one morning glory vine tip within 6 inches from the tip of the vine and about 20 within three feet of the garbage can location (on hosta flower stalks)
Take Nothing but Pictures--Leave Nothing but Footprints.
Doug Breda
Top
Post Reply Previous topicNext topic
7 posts • Page 1 of 1