Vespula germanica and others

Vespula germanica and others

Many thanks to all the members who have helped me out recently, it has been a fantastic introduction.


Here are the last couple of attempts, with trying to include some of the advice i have had.

The first is the wasp, shot with the setup at the bottom.

The second was with a 105mm macro and extention tubes on the same table.

In both of them the biggest problems i have been able to recognise is the blurr around objects infront of other objects, and the artifiacts when either combinez or helicon focus chop a bit out of the nearest object and put some of the object behind it over. In the first one there were chuncks of antenna missing that had details from the head behind in their place. It was ok to take one of the other stack pictures and superimpose it in PS but a lot of work. I was wondering if moving camera in and compensating by focusing with the lens would help but then i have not found out how much to move the focus ring and objective subject distance at the same time etc, or indeed how to measure it to get rid of perspective problems. Another problem (a taboo subject?) is that the poor subjects seem to tense a little on freezing, perhaps it is possible to get more realistic poses by administering some kind of muscle relaxant? 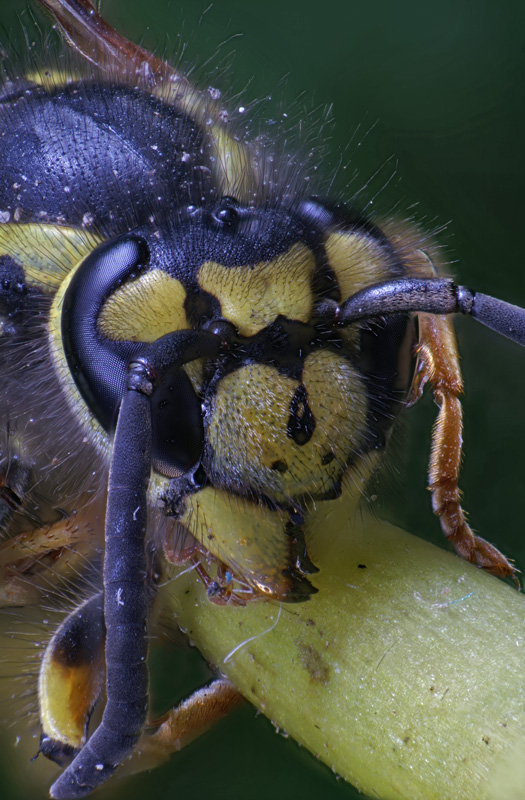 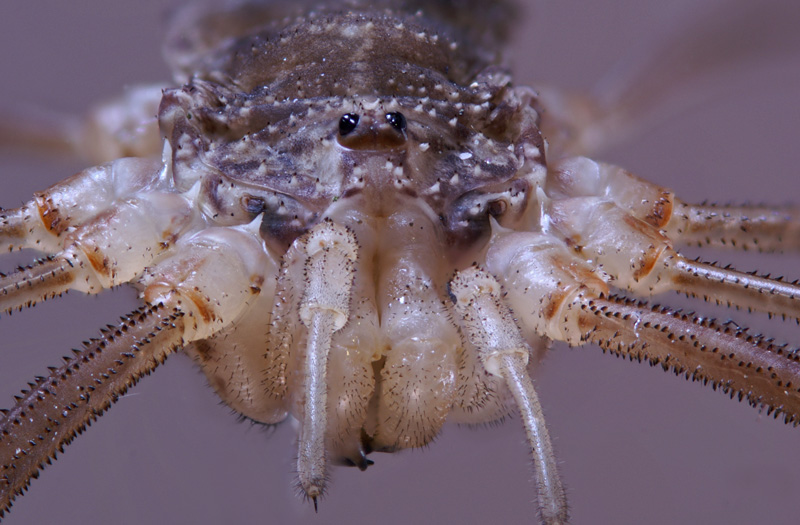 Now this last one is a real mess 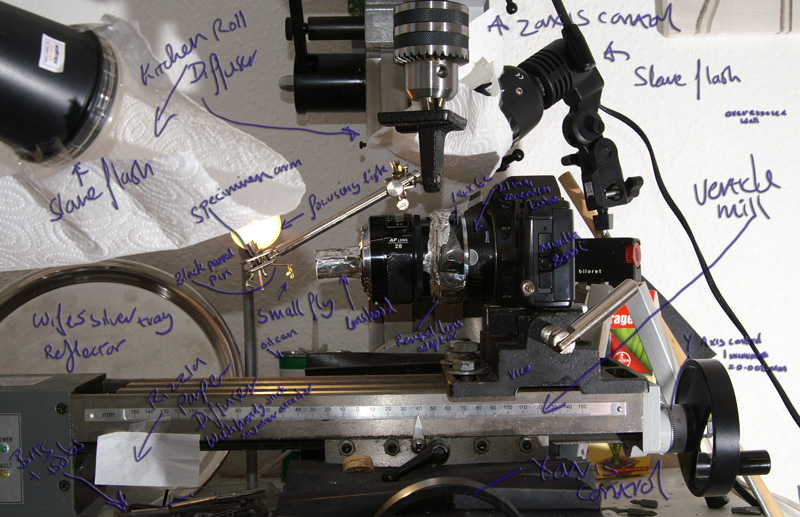 A very interesting post Tim. The results you are getting are excellent - particularly the Harvestman image.

I use CombineZM and step focus through the subject by manually adjusting focus, judging amount by eye. I have noticed that results are far more consistant, with fewer artifacts and soft areas when CombineZM is set up to process the images from back to front. I have conducted several tests using the same frame set and loading the resulting stacks into CS2 (as levels) so that I can toggle one with the other. Another factor affecting the quality of the stack (with CombineZM) is the degree of contrast in the individual frames.

In both of them the biggest problems i have been able to recognise is the blurr around objects infront of other objects,

Yes, that is a problem that seems unavoidable. As the closer part goes "out-of focus" it "grows" in size, which blocks the camera from seeing the detail (around the edges of the closer part) in the more rearward parts. So you can wind up with a soft "ring" around the foreground object. I don't know of any way it can be avoided. You develop skills at "re-touching" these areas

. To some extent you can anticipate the problem when setting up the shot, and sometimes lessen the effect with slightly different composition or subject arrangement.

I don't know about Rik, Wim, Bruce (and the other "stackers" here), but for me there is a certain percentage of attempts that simply don't turn out well. Often there are some very good sections, but other areas in the shot that do not look very good. It does not surprise me that this occurs more often at higher magnifications. For me it is a very rare "stack" that does not require a fair amount of re-touching. (Certain stacks do surprisingly better in CombineZ using the "Weighted Average" combination technique. Using that method in the current version seems far superior than it was in the versions of a few years ago.)

These attempts look quite good and you obviously are willing to put together a "set-up" that will prove very effective. Insect "taxidermy" is tricky, and a low power stereo (about 10x) can be extremely helpful in subject preparation.

I think all of us here are willing to share our experiences, but there is simply no substitute to doing as many "stacks" as you can, and carefully looking over and analyzing the results.

I have little to add, beyond what Bruce and Charlie have already said.

One technique that I have used with some success on overlapping structures is to split the stack, process the substacks separately, then run those (partial) results through the stacking process again to generate a final image. For example, I might have a 100-frame stack in which frames 1-60 are the bulk of the head and a bit of the antennae, and 61-100 are the bulk of the antennae. The result of 1-60 looks good by itself and so does the 61-100. Put those two together and the software seems to give the same artifacts that it would doing all 100 at once, but the manual touchup is a lot simpler because there are only two frames to deal with instead of 100.

As the other guys have said, your images posted here look quite good -- certainly much better than my first attempts. Image #1 could benefit from a level adjust to brighten it up. Right now Photoshop reports that there are very few pixels above 200. Try something like a levels (0,1.00,200) adjustment layer and see what you think.

One other tool that I've found handy is a CO2 duster. I originally bought it as a CO2 dispenser to use for anesthesia, following Charlie's lead, but apparently all the subjects I choose to shoot are not sensitive to CO2 because it just doesn't seem to have any effect on their alertness. On the other hand, it works great for removing debris. (Gosh, who woulda' thought that a duster would be good for that?

I've generally tried to post out all the relevant technical detail along with my stacked images. You might poke through my links here and see if there's anything I've forgotten to mention.