That is where I shot these. North Carolina was socked in most of the day by low clouds around the 3 and 4,000 foot level, so I opted to cross over into Tennessee, where I found the conditions to be much more favorable on Roan Mountain. Fall is starting to make its appearance, if anyone is interested or thinking of coming out this away for the fall show. Temps have dropped extremely at the higher elevations, upper 50's, about 57 this morning at Roan Mountain, warming nicely into the low 70's. I loved every minute of it!

Okay...so much for the weather. Here are the pics. 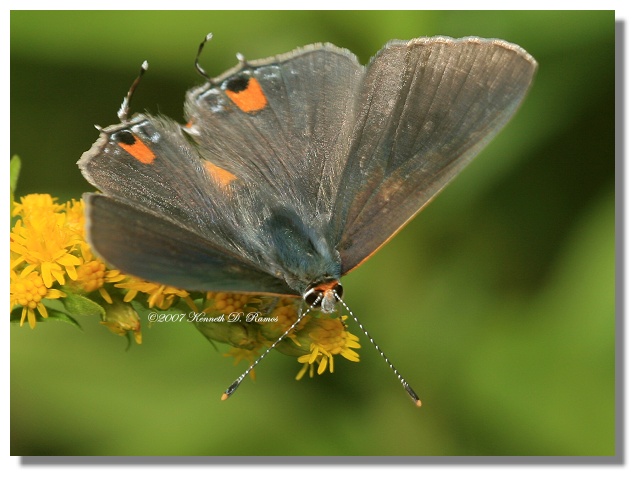 I chased this Hairstreak around the mountain for a good while, they are worse than Skippers to get to sit still long enough for a shot. Got it with its wings opening and closing.

Oh well, we take what we can get, eh? 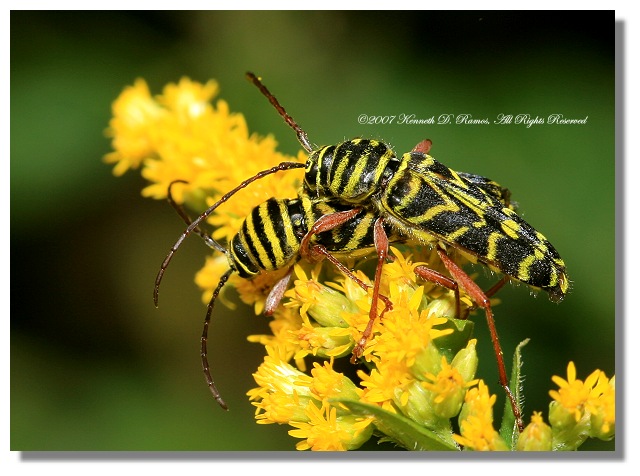 Quite a bit of this going on too, in the Goldenrods. Goldenrods are blooming everywhere but if you have allergies they may not be your "cup-o-tea." Anyway I love Goldenrods and their pungent aroma. There was an old homestead built back in the 1800's that is still going strong way back in the mountain. They were makeing homemade ice cream and doing all sorts of things, like "spinning thread" and such, not to far from where I took these photographs today. I kept a nose out for the smell of homemade liquor but seems as though that historical and traditional process was not taking place.

I found it truely amazing that folks used to live this far back in the "sticks" and still do! But getting back to the two "love birds" above, I have not seen Long Horned Beetles like this down in the foothills where I live. Really neat looking I think. 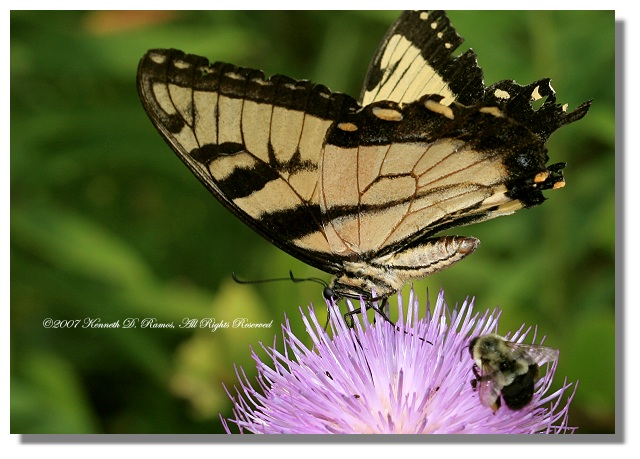 Last but not at all least, I spotted this on a thistle, an Eastern Swallowtail along with a Bumble bee. These two had a time of it. Each chasing the other away from the thistle, vieing for the best spot I suppose, to lap up what nectar it may produce. Myself...I walked on down to the old homestead I just mentioned and got in line for some homemade ice cream and eyeballed all the pretty mountain girls in short britches.

Those 2 beetles are neat looking

Thanks Jim, I have seen many a Long Horned Flower Beetle around here but none with stripes like these two have. They were just about everywhere you looked and at first I thought them to be yellowjackets but as you can see I found out they weren't (weren't...is that a word? "Weren't"

Yeah, I believe so

) Been in the mountains too long I s'pose! Well, I'm tuckered, guess I'll turn in and rest a spell.

WOW...Yes, I want those beetles. great photos Ken. Did you do any hunting for slime molds? Was 43*F here this morning...burrrrrrrr
Take Nothing but Pictures--Leave Nothing but Footprints.
Doug Breda
Top

Looked for a few slime molds Doug but I did not come across any. Not to say they were not any to be found, surely there were, I just wasn't in any of the right places. Hey, thanks Doug, glad you liked the beetles

burning up here in Florida,,