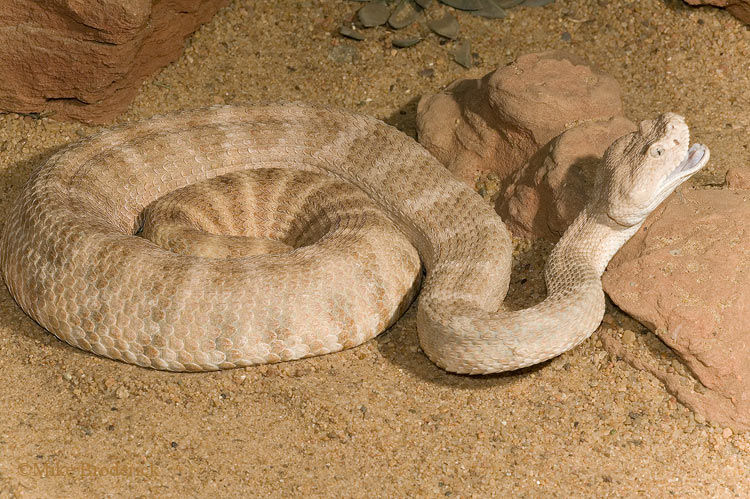 This rattler was irritated and couldn't make up his mind to strike or not. So he started, but didn't follow through. Note how the shadows show the front portion of his body is lifted up off the sand. At 100%, the snake's body is quite sharp, while his head is significantly motion blurred. I'd have preferred more room on the left, but I had to go with what I had when the snake looked like he was going to move. At least the top and bottom give him some breathing room, plus they leave room for the masthead and article names when my fantasies come true and this is used as a wraparound cover on a magazine!

A very nice photo Mike. I like the pinwheel pattern his stripes make when he is coiled up. So, What was he Agitated at? Was some little kid tapping on the glass or were you holding a dead mouse in your right hand in front of him?

beetleman wrote:. So, What was he Agitated at?

He didn't like the taste of the toothpaste I used when I brushed his teeth!

Today this fellow wasn't alarmed by my flash as I took pictures (occasionally he doesn't like the flash and I have to stop after a couple of shots), but when I used the modeling light feature to make sure I'd aimed the flash off-camera to the right correctly (this was a two-flash setup) it seemed to freak him out. I didn't quite have things set up properly, I had to brighten up a less-illuminated area in the upper left of this shot because it didn't get us much light. But I went with what I had as he reacted to the steady light.

I was pretty stopped-down here, which made the lighting a bit harder, but I like that I got pretty good sharpness from front to back, and didn't have much problem with diffraction here.
Mike Broderick
Oklahoma City, OK, USA

Once I almost pulled up one snake. It was looking like a convolute cord.