I am having trouble getting these things fully in focus. I admit I had to shoot downwards at them but they certainly are not as sharp as I would like. Also ISO 400 is a bit too grainy (noisy) for my taste but I was hand holding without flash. Suggestions appreciated. They were taken at my small wildlife pond I made which can now add Damselflies laying to it's ever increasing fauna. 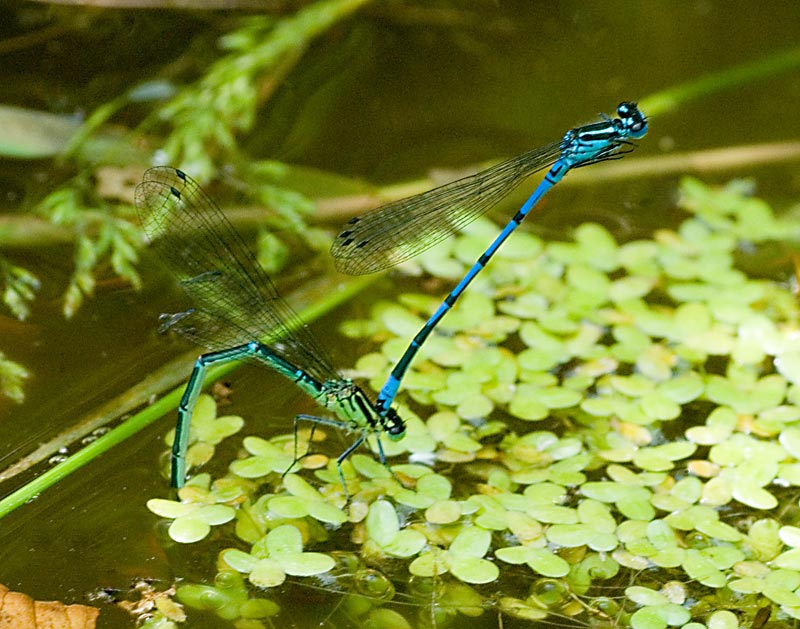 Here is my pond. Not the thing to use as a centrepiece for proud gardeners. I think I need to thin the weeds out a bit now though, but I was letting nature take it's course. It is about 5' long by 3'-6" wide and 14" deep at the centre.

I just dug a saucer shaped depression in the ground, covered it with black polythene and mixed up stiff mud to cover the polythene with a 2" layer of soil to make it more naturalistic. I made it about a year ago and just filled it from the rainwater but. The only thing added was that small bit of duckweed, frogs, water boatmen, pond skaters and now Damselflies have all arrived of their own accord as it has matured. 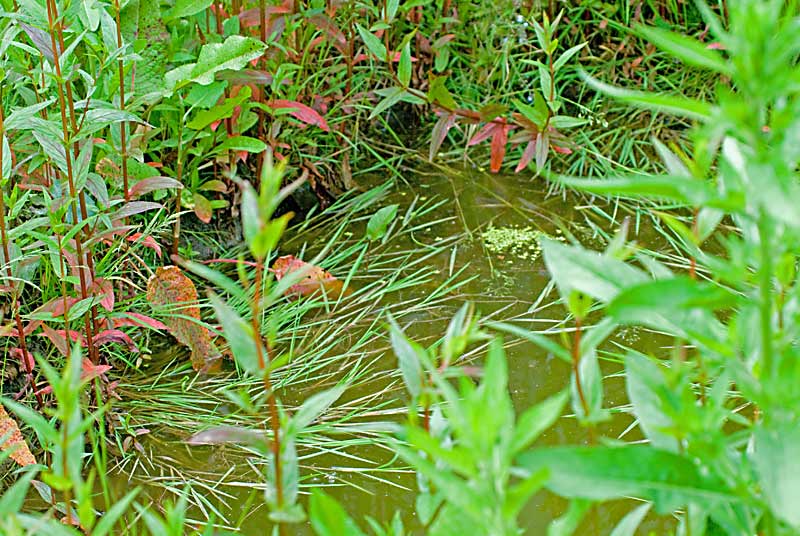 I kept the width down to 3'-6" for close-up photography so I could reach the middle from either side, the length does not matter.

You know for microscopy that is an excellent idea, as far as having a steady supply of pond critters for observation and not to mention the insects that you have had to arrive there, for macro shooting.

I would not mind having one in my yard but the county would probably come out and load it down with DDT to keep the skeeter population down.

However at the moment we have a rabies crisses going on, cats and foxes.

Dave, it would be easier to offer suggestions if we knew how this picture was taken. I got that it's ISO 400. But what portion of a frame is this, and what exposure time, what aperture, what lens/camera?

Dave, having also taken similar shots at the pond I visited recently, I'd say that the angle that you're (probably) forced into using is a big disadvantage from square one.

Whilst many major bits of the pair (exc. wings, of course) are likely to lie on a roughly vertical plane it's going to be important to get down low enough to be perpendicular to that plane.

Even then - if they're wriggling around, it's unlikely that those bits will lie on that same plane (coplanar).

Using a longer lens (as I also tried) when they're further away reduces the angle - but of course introduces other problems.

Even if you cleared (if not already got) a pic taking area at water level you'd still have to wait for some action ... at which point sod's law would kick in and you'd probably only get head on shot chances and no side views

Will post the details etc as soon as I get chance, been working and also out tonight.

These are Coenagrion puella. Damselflies during egg-laying, with the male in the so called sentinel position, are hard to photograph. Best approch should be to get as low as possible. I have a friend who did built an elevated pond, so he does not have to get down so low to photograph

I love the duckweed. You could go down to the pet store and buy some small feeder goldfish and that will take care of the mosquitos.
Take Nothing but Pictures--Leave Nothing but Footprints.
Doug Breda
Top

You miss the point Doug of these small ponds, as you say fish eat insects, put in fish and your insects are gone! The other insects also eat the mosquito's too.

If you have a "fish free zone" you get the insects colonising it. As it was the resident frog had a stab at the damselflies when they got too close but they were too quick for it, even though paired.

Rik here is the information you requested. Here is either the original image or one of the original set uncropped and unretouched apart from sizing and sharpening:- 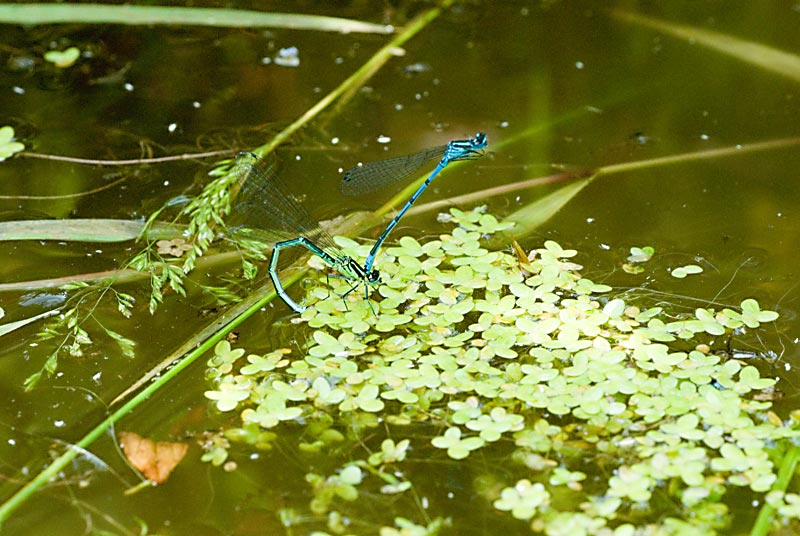 Paul, the problem as you say was shooting downwards as the bank is always higher than the water. The best Damsel or Dragonfly pictures I have seen were always taken perched on plants so the lens could be got parallel to them.

Erland, thanks for confirming the identification. I had found that from this site:-

I had identified it as Coenagrion puella:-

But my friend had suggested Enallagma cyathigerum:-

I am amazed two such similar looking species are in different genera?

Thanks for the additional info. I've spent a fair bit of time mulling over your problem, and I don't have any new magic to suggest. I think the basic problems are that you're out of plane and short of light. Because you're out of plane, you need that thin cone of light to get sufficient DOF. That cuts into your sharpness, and because you're also short of light, you're being forced to use a high ISO (more noise) and to move back (fewer pixels), all of which combine to give you a slightly fuzzy "grainy" image.

I'm afraid it's down to "wait for better weather, add a flash, pick a better viewing position and/or hope for more cooperative subjects".

I wish I could offer other suggestions, but nothing practical comes to mind.

Trouble is Rik I am in the UK and weather does not get much better than this! It was a nice sunny day. It was often said in the UK that the reason Kodachrome 25 was invented was there was a far greater light intensity in the US, but we were often struggling with it in many parts of Europe and using 64ASA (ISO) instead.

I think I will really have to go to diffused twin flash. I have the gear but have not got around to setting it up yet. Like most modern stuff the Nikon SB600 flash's use a menu system to set up their myriad of functions, plus I need to go through a similar menu system on the camera to set up the pop-up flash as Commander unit and set the camera for iTTL flash control.

Being a simple geriatric I am more used to buttons and knobs and only a couple of functions to set. Obviously like a video recorder I need a child of 4 to set them for me! I promise I will soon make the effort though!