Photo is of Allium ursinum (wild garlic) taken while walking my dog in Salcey Forest, Northants, England. This was just a solitary plant growing on the edge of the path so there was non of the garlic smell you get when they grow in large groups. The long leaves (not visible in pic) were dark green and blade-shaped.

Its common name is Ramsons.

Stinking Nanny is a regional name for this plant - another is "stinkbomb". Checking on Google suggests that the specific name ursinum relates to the belief that bears eat this plant when they come out of hibernation to clean their system - leading to another regional name "bear's garlic". 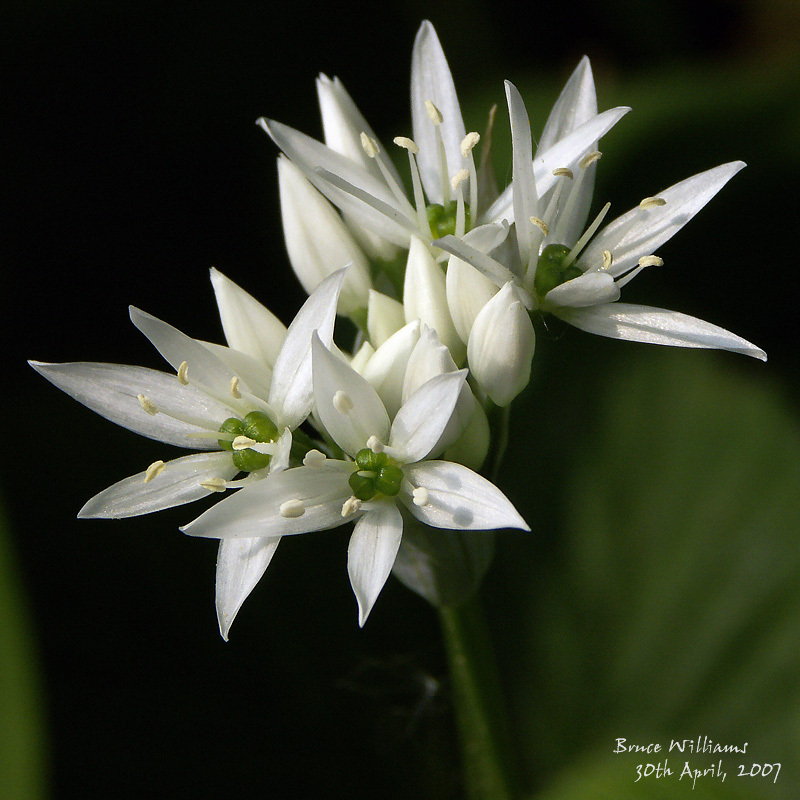 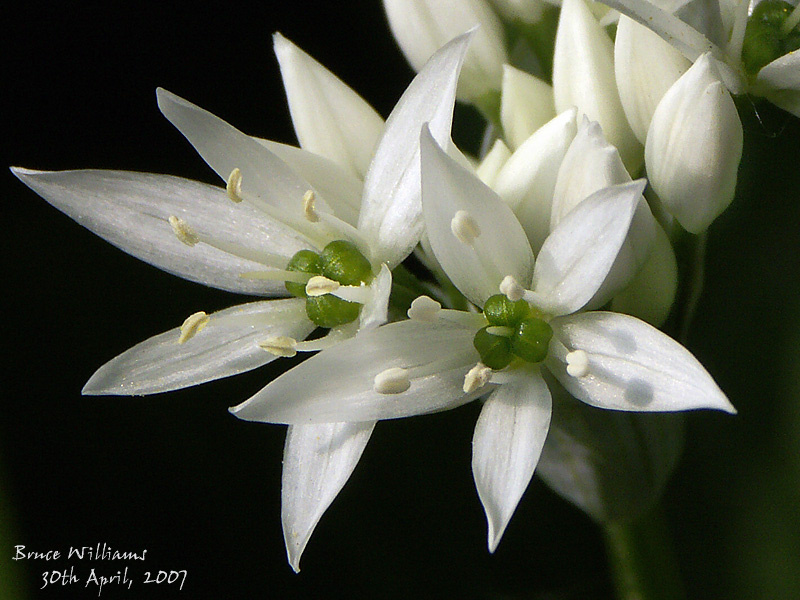 By the way, how big are these flowers, anyway?

The flowers fill the frame and complement one another, they command your attention right off. The sharpness is keen and the depth of field appears to be right on the money. Though I have some reservations about that dark background but we cannot have everything I suppose and that is only my opinion

In the first image the flowers seem to want to leave the frame and something else seems to be amiss but I cannot place it at the moment. The image looks "empty." Maybe if one studies the image a bit more, they might could place what it is.

Thanks for your encouraging comments Rik

The flower measures ~15mm in diameter when almost fully open (as in the photo). The plant is quite tall - hmmm...I didn't actually measure it but from memory I'd say it was somewhat short of half a metre, ground to top of flower head.

Thanks for your comments Ken - thoughtfully considered as always

I agree with you that compositionally pic1 does look a little "empty". However, I think it has more of the "feel" of the onion family about it - hinting at that typical long, leafless stem common to (all?) Alliums.

I think I prefer pic2 as well. The photo was taken (using available light) from a sunlit path looking into the woods, hence the dark background.

All has been said, I need to say nothing more

I do not only like your picture but the plant itself as well. However, "Stinking nanny" or "stinkbomb" do not sound very appetizing to me.

You must know that not only bears eat it, man, at least over here, eats it too! Some collect it in the forests for cooking, add it to bread, gratins, omelettes etc. It´s really tasty. Rick Stein, if he hasn´t already, should give it a try!

"Bärlauch", this is its common name in German what means bear´s leek. (The common leek, A. porrum, is placed in the same genus, as is garlic, A. sativum). Its usage in cookery has become quite fashionable in the recent years, and nowadays A. ursinum is farmed commercially. Over here one can buy it at the grocer´s or even in supermarkets. You can also get cheese with "Bärlauch" in it.

It so happended that I have gathered A. ursinum once myself and know quite good places where it grows in a region in the very North of Germany. This region is called- and therefore I am telling you this - Anglia or "Angeln" in German. It´s part of the former territory, where the Angles lived before most of them emigrated to the British Isles in the 5th-6th century AD. As you surely know England is named thereafter, and East Anglia of course. And when I visited this "original" continental Anglia for the first time the landscape with its hills and hedgerows quite reminded me of some nice scenery I had encountered in the English Midlands before!

Now, lo and behold, what associations your "Stinking Nanny" has provoked in me.

Thanks Doug - Me too - garlic really does draw out the flavours in so many dishes. Of course there can be a downside from your companions point of view

Betty - Thank you for your kind comments on the photo and for the interesting information. English cuisine has changed so much in my lifetime (61 years) and although (IMO) we might lag many of our European neighbours (France and Italy in particular) in appreciation of "good" food, we are catching up fast and garlic is figuring more and more in our everyday cooking.

Sorry Betty, but I'm not too familiar with the full extent of German cuisine - although my all-time, best ever meal was a complete suckling pig that I (more than) enjoyed in a restaurant in Bremen back in 1978

I've been a keen student of early British and related European history for many years and never cease to be amazed by just how much all our "histories" are inter-related.