Skull of Alexandrine parakeet (Psittacula eupatria) from Indian sub-continent. See this webpage to get idea of size and appearance of bird:

I bought this skull from a specialist dealer in animal skulls and skeletons. Unfortunately the various parts had been glued so I've not been able to pose the upper beak in a manner that would demonstrate its unusual motility.

We had a Blue Fronted Amazon parrot (Sam) as a (free flying) family pet for 23 years (similar in size to Alexandrine parakeet). I did a fair bit of reading on parrots over that time, so for those of you that are interested here's a bit of "parrot info.".

The complete beak "system" is called the rostrum, and parrots (I believe) are unique in being able to separately move their upper beak (the rhinotheca) as well as their lower beak (the gnatotheca). This gives them wonderful manipulative control (almost like a thumb and forefinger) and considerable bite power.

The photos clearly show the bones and kinetic joints involved in articulation of the upper and lower beak. Of course the rostrum is worked by powerful muscles (I know first hand just how powerful having been bitten several times). Just compare this complex structure with other birds, mammals, reptiles etc...to get a feel for just how truly unique the parrot's rostrum really is!

The tip of the under side of the rhinotheca has a pattern of ridges that can be seen in pic2. This helps the bird to hold (for example) smooth shelled nuts while they use the side of the gnatotheca and their tongue to split and separate the shell. The tip also contains a bunch of nerves that enable the bird to get a better "feel" for what its got in its beak.

Both images: Minolta A2 tele-macro, ~10 frames stacked using CombineZM and processed in CS2. 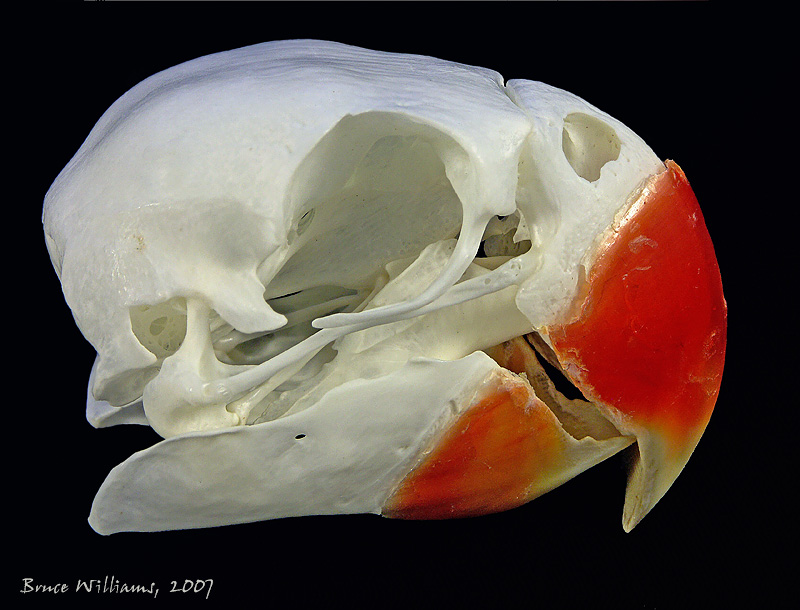 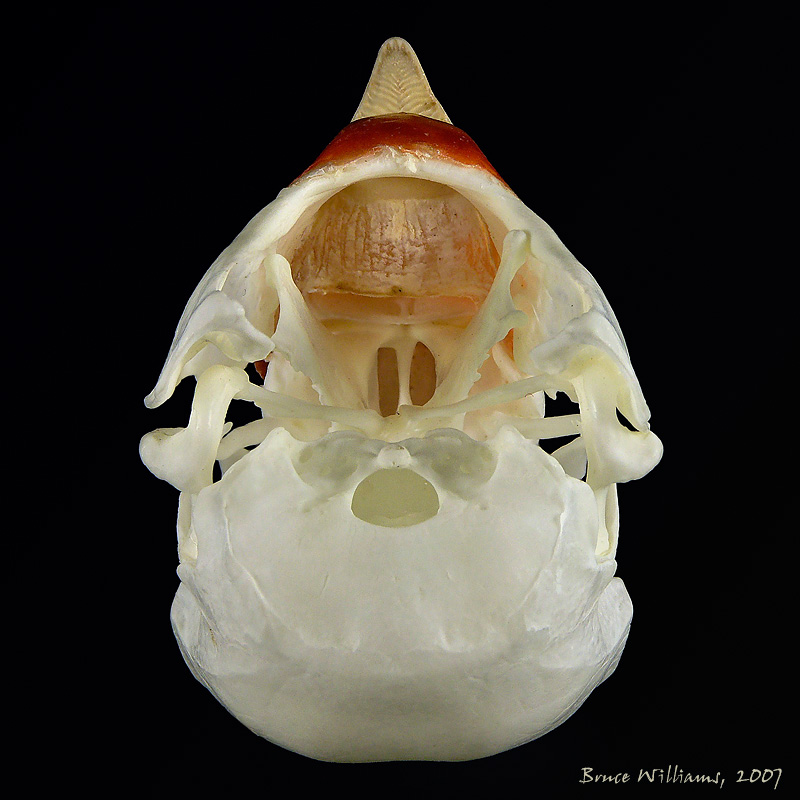 Great pictures, fascinating info, and an excellent link -- thanks!

To see more skulls, albeit in a lot less detail, visit http://www.skullsite.com/index.htm and search on "parrot" or "parakeet".

Excellent Photos Bruce and a wonderful looking skull. Didn`t know anything about the upper beak being able to move and the picture clearly shows that. The red beak sure is an added plus on the skull. I can just imagine the muscles attached to the bony plate of the lower beak.."OUCH"

Nice clean shots here Bruce, I really like the details that you have captured in the skull.

Thanks for the encouraging comments guys and that's a great link Rik!

Those are very impressive photos. To call them textbook quality would be an insult to your excellent work. I am going to have to look into frame stacking to solve DOF issues when they occur.
Top

Welcome to the forum