Puzzle picture - can you identify this image?

Puzzle picture - can you identify this image?

Just a little bit of fun.

[UPDATE] Three photographs of "The Answer" can now be viewed in my posting Skull of young River Otter. 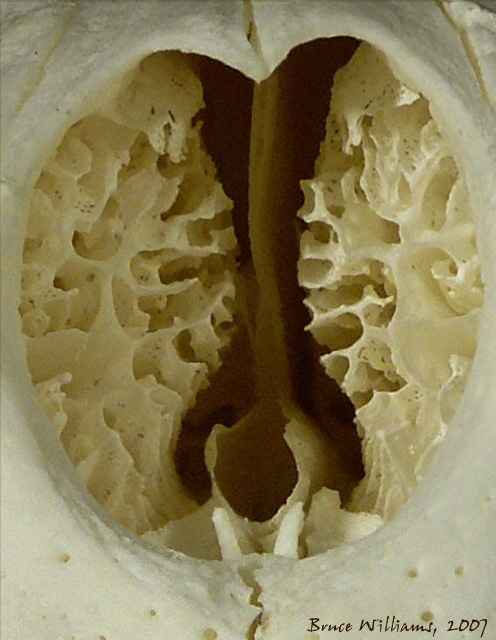 Looks to be the skull of some sort of fowl, as to what particular speices of bird I would not know.
Top

Thanks for giving it a go guys

I was going to include a scale bar but then thought, "Hmmm, there's probably enough clues in the bone density and relative size and density of the nasal concha...". I know with some of the sharp characters on this forum, if I'd given away too much then I'd have gotten species, gender, age and marital status!

Ok, to be honest I don't expect species (I'd never have got species myself if I hadn't taken the pic AND known which animal the skull came from

). However, figuring out that "it's something like a..." should be possible (Doug, Ken, anyone?) - and yeah I know that's totally unscientific

Hi Nikola - you slipped that one in while I was typing my last posting...and yes it does look like a blanched walnut

Thanks for giving it a shot.
Bruce

I was expecting Rik figuring out ID and even telling us a cause of decease.

MacroLuv wrote:I was expecting Rik figuring out ID and even telling us a cause of decease.

Remember me? I'm the fellow who often cautions about giving IDs that are too specific.

But since this topic is getting quite a bit of traffic, I'll give it a go.

What I don't have at hand is any collection to compare this beast against.

I tried image-Googling skull and nasal concha, but that gave me way too much and way too little, respectively. nasal bones was also not helpful.

But, part way through the skull list was a picture of a badger skull, which seemed to have about the right shape and reminded me that Bruce has shown us a picture of a badger skull. "Yeah, sure, that's gotta be it!", I thought for a moment. But then I compared the pictures and noticed that this one has obvious sutures top, bottom, and sides, where the other one does not. So I'm fairly confident that it's not the badger in Bruce's other picture!

The other thing I notice about this picture is that it's not as crisp as Bruce's usual photos. That suggests that it's smaller than his usual subjects, though it could also mean that he just stopped way down instead of stacking. (I notice he didn't give any technical info from which one might work backward. Humph!

So then I went Googling for mouse skull, shrew skull, and vole skull, but the shapes looked wrong. cat skull didn't give me anything that matched up well either. Likewise for dog skull.

Backtracking, I tried more specifically for badger skull. That turned up one decent picture. It's from a completely different angle, but at least the shape looks right and the sutures seem to be in the right places.

So I'm gonna stop there and say "something like a badger, a young one I would think."

But that could easily be way off, and I remain...

[Edit]
PS. Hey, anybody know about these guys? http://www.skullsunlimited.com/carnivores.htm Sure wish I'd found them when I started this exercise!

I was going to say badger also because of your post here http://www.photomacrography.net/forum/v ... ght=badger

But....this picture doesn`t look as old and weathered as your badger post plus the angle seems to be off, this one is more up and down (the nasal cavity) and the badger would be more like a 45 degree angle. I think old skulls usually do not have all that junk inside the cavity. I will say human.

Bruce seems to be the kind of person that has friends in high academic circles that might have a human skull around for him to borrow.

Unfortunately I've already returned the badger's skull and annoyingly I didn't take any "full face" pics - but from memory I'm sure Doug's right about the condition of the nasal concha (being a very old skull).

Impressive deductive process Rik (in more ways than one) and WARM too. In fact at one point I thought you were going to ROMP home with the gold star. Your concluding statement earns you an altogether well deserved 6 points - well done!

So folks, now that you know that it's not a badger, and as this is a bit of a toughie, I'll confirm that in common with the badger we are looking at a member of the Mustelidae.

...and I for one would never call you clueless Rik

So it is Weasel? Or precisely it could be Mustela nivalis if from England?

Shucks........Human nasal openings look more like inverted hearts. I was going to say skunk but it looks like they have moved them out of that family....how about a "MINK". Mustela lutreola
Take Nothing but Pictures--Leave Nothing but Footprints.
Doug Breda
Top

Assuming of course that everyone's using the same definition of "Mustelidae".

Not a weasel and not a mink

That's an interesting site Rik - thanks

Ok I guess we've gone about as far as we can with this one. I did realise that it would probably not be possible to narrow things down to species within the Mustelidae, so I left a few "clues" in my last posting, with the hint to their existence being my comment "...and I for one would never call you clueless Rik

The actual clues are the two upper case words. The first clue is a groaner and I apologise in advance for it

and the second clue is "gettable" with a little effort in my opinion.