Lithops....For The Cactus Lover in You!!

Lithops....For The Cactus Lover in You!!

I guess I am becoming one. I bought a Bakers dozen of these little hardy desert plants. It was cactuspics fault when he posted the picture of his "Baby Toes" http://www.photomacrography.net/forum/v ... =baby+toes and I remember seeing these plants before and thinking how cool they looked. They basicly have two stout leaves when they are mature. Flowers and the new growth come up through the center and as the new leaves grow, the old leaves and their life saving moisture are re-absorbed by the new leaves and the old leaves shrivel up.
More info here... http://www.lithops.info/
ALL PICTURES:
1/20
F/8
ISO 100
This lithops is only 1" long and you can see the new growth coming up through the center. This one looks like it will have two pairs of leaves. 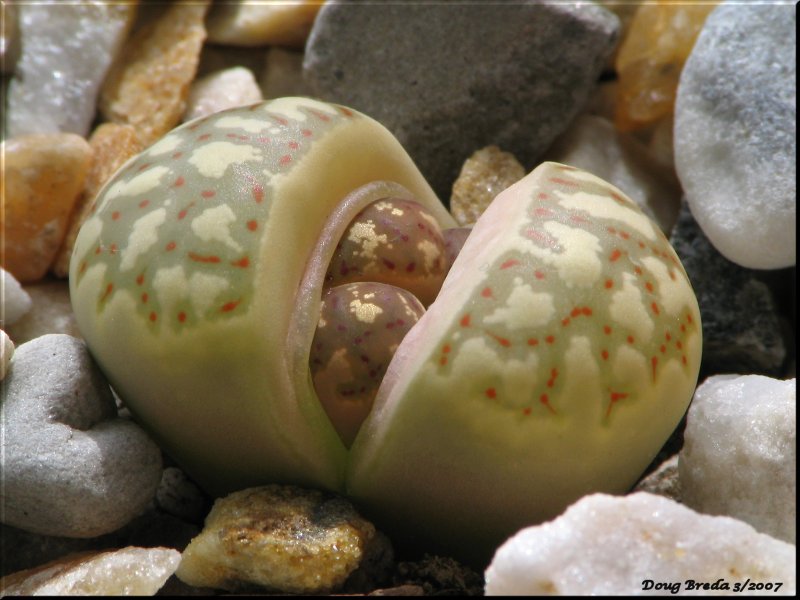 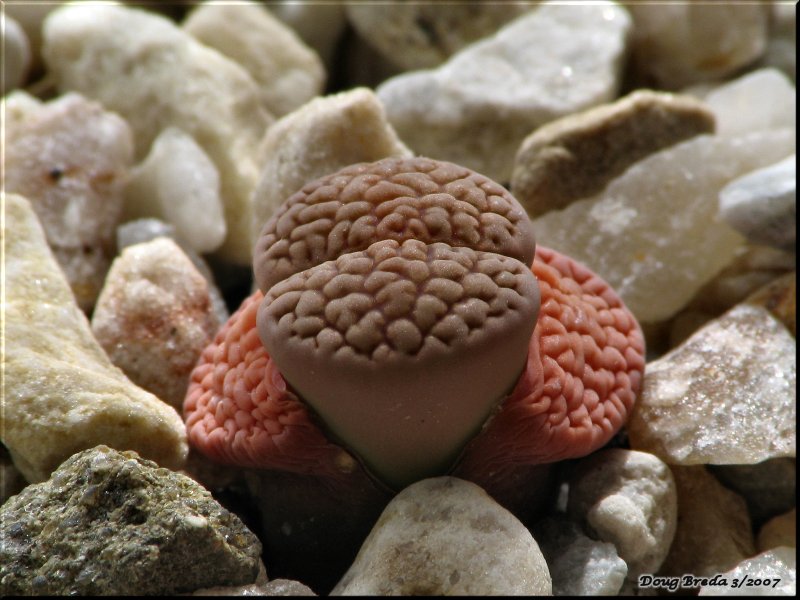 They Do have a few colors!!! This one has split into two heads and the thing in the center is the spent flower. 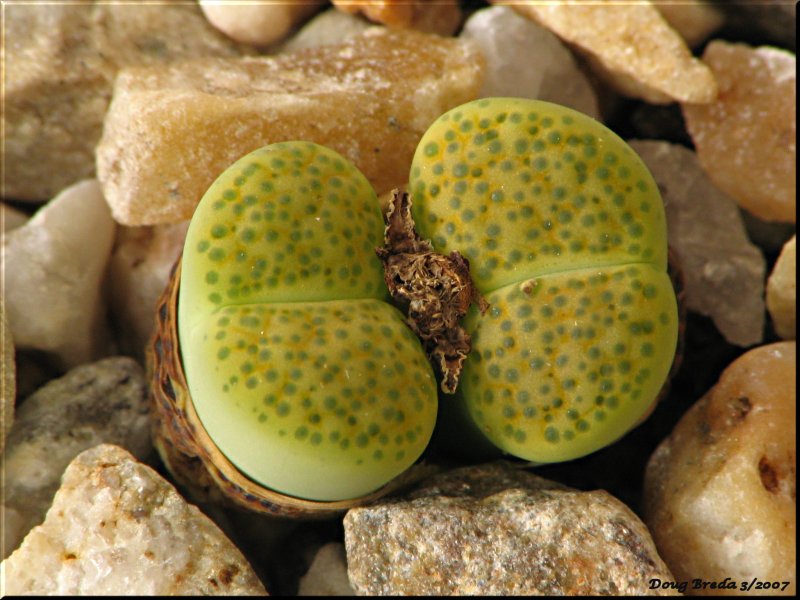 Three very different looking species of Lithops, Doug. Interesting how the new leaves are rotated 90 degrees from the previous "generation". You've done a good job with the photos too

Are we gonna see pics of the other ten sometime soon

Wow! These are really cool, Doug. I honestly didn't know anything about Lithops before reading your link (thanks, btw). There is something almost alienesque about these little things.

Fascinating! I've seen some clever defenses before, but a plant imitating a rock is definitely new to me.

"Fascinating! I've seen some clever defenses before, but a plant imitating a rock is definitely new to me."

I am surprised Rik as some of the mimicry cacti also occur in the USA as well as Mexico:-

Click on "Habitat" on the left hand side to see some.

Thanks for the comments everyone

Lithops are great little plants. A super book if you can find it is "Lithops-Living Stones" by Desmond Cole.
Http://www.armyants.org
Http://www.notesfromunderground.org
Top

DaveW wrote:"Fascinating! I've seen some clever defenses before, but a plant imitating a rock is definitely new to me."

I am surprised Rik as some of the mimicry cacti also occur in the USA as well as Mexico:-

Click on "Habitat" on the left hand side to see some.

Hhmm... I live quite a bit north of those, and the Ariocarpus still look like plants to me, albeit hard to get an eye on.

I guess it could be that nothing like Lithops grows near me, or perhaps the disguise is just extremely good!

(Now where was that "lichen covered rock", anyway?

And Lithops don't always mimic the pebbles they grow amongst exactly. Their camouflage is usually that their shape breaks up their outline so they do not look like plants. In the case of Ariocarpus those pictured are green turgid plants, so flowering. In the dry season their contractile roots pull them down into the ground and they get covered with dust so only their grayish tubercle ends show looking like fractured rock.

The best way to find many "semi subterranean" cacti with contractile roots is when turgid and flowering, at other times they can be difficult to spot even if you know they are there at that site.

Those last two links remind me of a plant that I am familiar with: Lewisia rediviva, commonly known as "bitterroot" although I grew up calling it a "rock rose". About that plant,

C.P.Lyons, Trees, Shrubs, and Flowers to know in Washington wrote:Bitterroot is an abundant spring bloom on the most exposed places throughout the dry Interior. It suddenly appears in May as if by magic and disappears in the same fashion. The rose-pink flowers hug close to the ground, their 10-15 petals spread wide in the sunshine. By the time the flowers appear the tufts of fleshy leaves have dried up. The root is thick and fleshy and was used in large quantities by the Indians. When the roots are boiled they swell up and become jelly-like. An early explorer says that a sack of roots would buy a good horse.

Very different taxon from the Ariocarpus, but sounds like similar habits. They still strike me as looking like plants, though, when they're up and about.

These Lithops, on the other hand, still look like pretty pebbles. Maybe I just need to get my eyes adjusted.

love the brain mate, for some odd reason i have the uge to....

i used to have a couple of those other types when i was younger, but i think mine where of different species, there cute little things arnt they.
Top

Your green lithops is lesliei, I think. It is starting to colonise and has a second head.