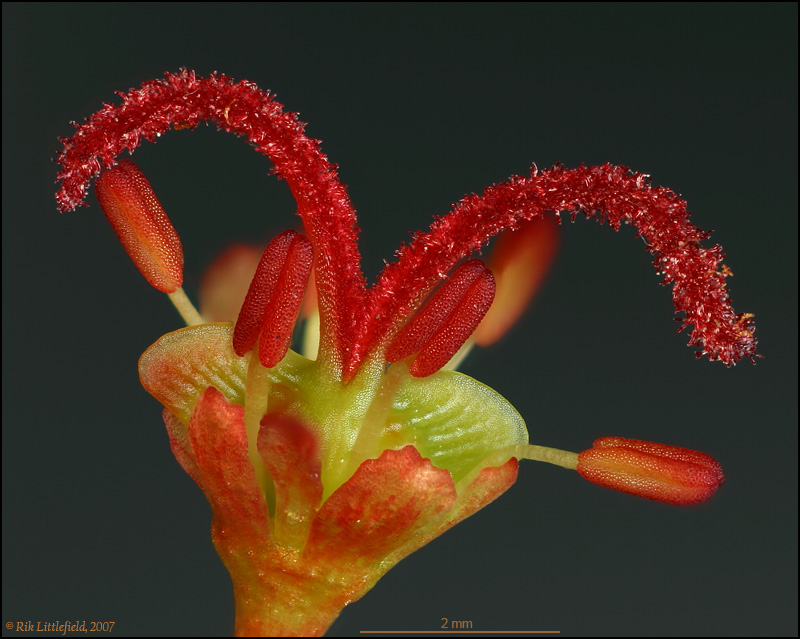 Spring must be coming -- my maple tree is blooming!

You've achieved both artistic and technical excellence with this bi-colour study Rik. Levels and colour saturation are spot on and the out of focus stamens at back nicely accentuate the three dimensional nature of the subject.

Wow, pretty neat there Rik. Looks sort of like what I got in my front yard. Maybe it's a maple.

I'm just curious about F-stop, actually magnification (x:1), amount of applied sharpening and flash usage?
I would be in temptation to clone out one black and few white spots from this beauty.

I too am such a gadget geek that I am moved beyond artistic admiration to wonder about the technicals. I am SUCH a Philistine!

I'm always surprised by what these flowers look like up close. Even when you have some in hand, they're pretty "blah" until you haul out the magnifying glass. Then they're, well, what you see here!

Ken, I'm not sure what your flowers are. Every time I go to the east coast, I'm impressed that I do not recognize most of the trees! I guess we'll know in a few months. If yours has maple-shaped leaves and makes those little winged seeds, maybe it's a maple?

Nikola, Bruce, and Mike, see this technical description over in the Technique forum.

This picture is beautiful, Rik. You, Bruce, and others have certainly inspired me to investigate the stacking technique. Is it pretty time consuming to complete a single photograph using this technique? I know it is worth it in the end after seeing what you do, but I am curious.
Craig Rotermund
Canon 30D
Sigma 150mm
Top

Doing the first few takes a long time. At this point, I have equipment and procedures that make stacking pretty painless. For this picture, I spent much more time in specimen prep and getting the final image polished for posting, than I did in shooting and processing the stack. It's quick enough that for a static subject, I will seldom choose not to stack.

I agree, they are! But I had nothing to do with the colors except make them big enough to see. These are straight off the tree.

Craig, I looked at the timestamps on the various image files.

Turns out to have been just under 10 minutes from first frame in the stack to being done with Helicon Focus. Actually shooting the stack was only 88 seconds for all 30 frames. (They go pretty fast at low magnification where there's plenty of light, large steps turning the screw, and no worries about vibration.) So that's the stacking cost -- 10 minutes.

If I were faster at all the other stuff, maybe I'd be less fond of stacking.