Look what I found at my work today: 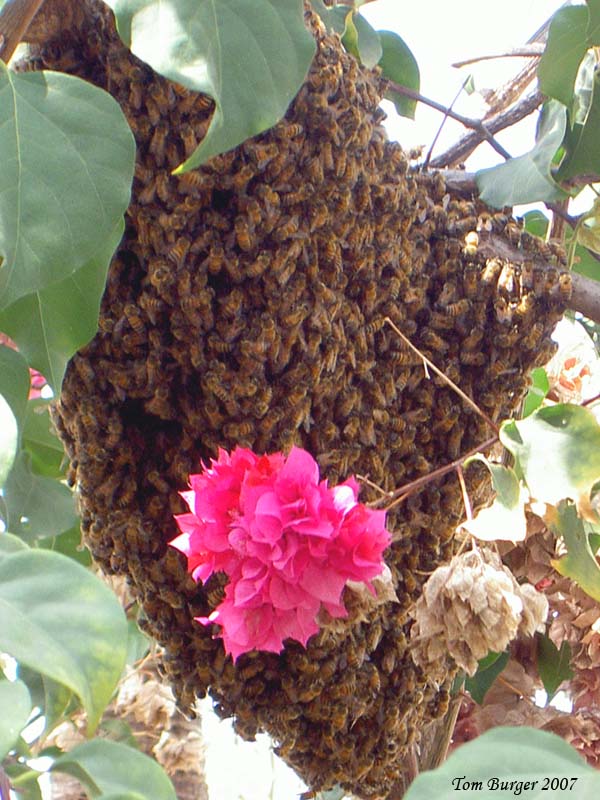 And a little bit closer. Unsharpness is from me shaking

there where just tooooo much of them 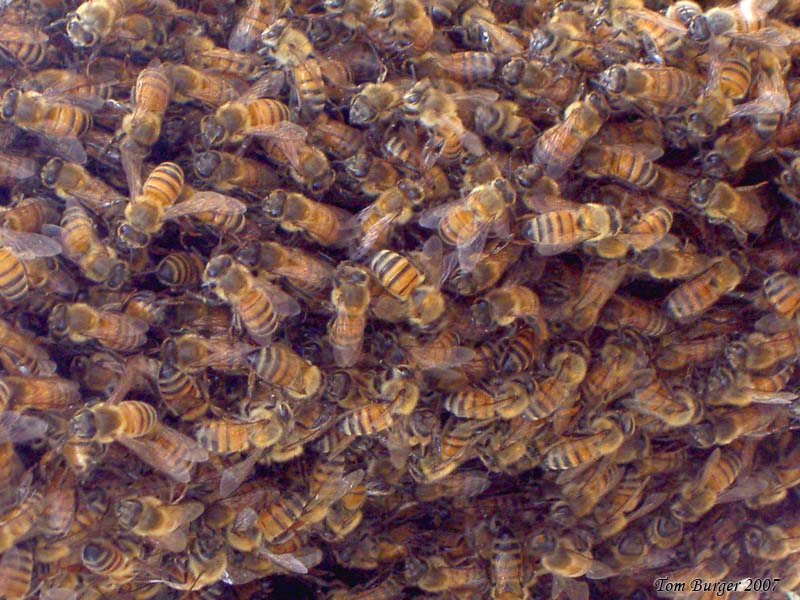 WOW, what a nice find, and some great pictures too Tom. The flower in the first picture is an added bonus IMO. I would have worried if they were "KILLER BEES"

At your work? What kind of place do you work?

Tom, what you need to do tomorrow is to get a mass inflight shot. All you do is get up close and beat the hive with a stick...get ready to take some quick action shots of all the bees in the air at once...would make a nice shot...and probably your last.

Whether they were AHB or not, during this phase of their life cycle they are relatively harmless. Great shot though.
Http://www.armyants.org
Http://www.notesfromunderground.org
Top

Thanks for the comments, to bad for your plan Ken, but they already removed the colony (including the lady of the house so to speak).
An imker came to remove them all with water, a duster and a box

he's the most coolblooded man I saw handling bees

I have been hearing and reading in the news that the Honeybees are disappearing here in the US and that the cost of our produce is going to sky rocket without them. No one has said where they are going or if anything, such as a virus maybe, is killing them. Anyway they are diappearing at a rate of billions per day according to estimates.

During my previous internship, I found a nest of bees and later on in the same area a nest of hornets that was infected with a extruding fungus. It grew from the inside out and caused them a lot of pain. Even so much pain that the hornets bit into the wood of the tree out of frustration / anger and then died because they got stuck.
Result was a lot of dead hornets that had white rings of fungus between the segments of their abdomen. Really strange to see.

All the best and thanks for the comments,

Well, well, Tom. Seems you have come across something I have been interested in for a short while at least. Sounds like Summit Disease and if so, the hornets were not biting into the wood due to pain but compelled to do so by the fungus, Cordyceps, that may have infected their little brains and CNS (central nervous system).

Yes thats it, Cordyceps. I have photo's of it back in the Netherlands on my PC.
I can't remember if I posted them on the former forum or not.
The bees I found with the same rings on their abdomen though, where not biting down on wood. They where lying on the ground having a fit (or so it seemed) and the just died. Their stingers still pulsating in and out of their abdomens. Kind of sad to see actually.