Second time I saw this behaviour with ants. I don't know if the larger ants are feeding the smaller ones.. but the big one came from the food (banana) I had put there, and the smaller one was going towards that food (in that direction anyway).
Or maybe it is a direct (chemical) way to pass information on to each other... I don't know 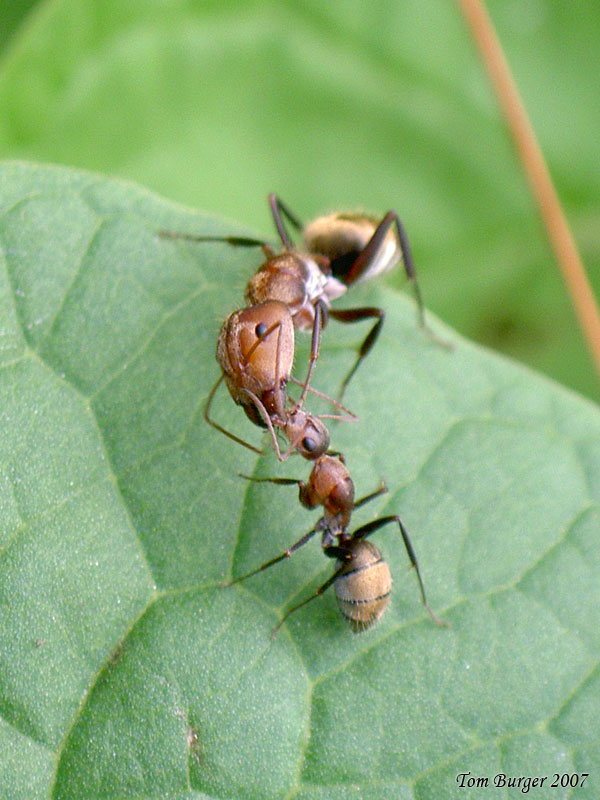 You captured some interesting intra-species interaction here (worker and soldier is a reasonable assumption).

Now wouldn't it be just so bizarre if us humans had developed along the same lines of polymorphic specialisation. We might see 10 foot tall, hugely muscled solder humans and small, fast and wiry worker humans and of course we would need a queen to bear all the kids ...the mind boggles when trying to picture what she might look like

And it would be called sexy!

I must say TomB, you did a great job with this photograph. Not only is the behavior of the ants remarkable but the depth of field and composition of the image is fantastic IMO. Very nice work

Now wouldn't it be just so bizarre if us humans had developed along the same lines of polymorphic specialisation. We might see 10 foot tall, hugely muscled solder humans and small, fast and wiry worker humans and of course we would need a queen to bear all the kids ...the mind boggles when trying to picture what she might look like

You are right about the worker & soldier part, but this behaviour I have never seen between those two intra-species sub-groups of ants, in the netherlands anyway.
The smaller ants (different species) that lives here is really something different, they are ~1 mm in length and are massive in numbers (estimate of about 500 up to 1000 on a piece of bread, yes I have lunch-breaks

) whilst they are foraging. While these fellers, or should I say lasses, are about 5 times that size (workers), and >10 times that size (soldiers), foraging in groups of ~20 to 25 individuals.
These foraginggroups are composed out workers aswell as soldiers, all of them feeding.

Tomorrow I will try to take a picture of the group in whole, and I will also try to count the worker/soldier ratio in several groups using same size baits (read squashed banana & sirup

All the best and thank you all for the comments,

Great shot of a bit of trophylaxis. This is genus Formica technically they do not have a soldier /minor caste systems as the works range in size from the very small to very large with no distinct gaps in size.
Http://www.armyants.org
Http://www.notesfromunderground.org
Top

Gordon - So that's what they were doing ...and a new word (new to me anyways) to thank you for

BTW, could you recommend a good website for general information on ant species, organisation, behaviour and morphology?

Yes sir, I had to look up that word..thank you Gordon for the interesting info and thank you Tom for the great picture.
Take Nothing but Pictures--Leave Nothing but Footprints.
Doug Breda
Top

I am so glad WE do not use trophylaxis to feed each other.. Rather have my mrs. feed me with a spoon actually

Thanks for this new addition to my vocabulary!!

About new shots; it has been rainig for 2,5 days now.. zo every bait i put up is washed away within a few minutes

Really nice shot, Tom!
Where was it actually taken? Not in the Netherlands, I presume

Btw, there was a little misstyping.
The correct spelling is
t r o p h a l l a x i s.

(Though I know for sure that Gordon knows how to spell it right, but we don´t want the other guys to get their new vocabulary wrong

To be even more specific: Tom´s capture shows stomodeal trophallaxis since the donor spends the liquid food from the mouth. The other version not shown here is called proctodeal trophallaxis which means that the food originates from the donor´s anus.

P.S.
Gordon, what makes you sure it´s Formica and not say... Camponotus for example?
(asks Betty who is always willing to learn)
Last edited by Planapo on Wed Feb 21, 2007 7:07 am, edited 1 time in total.
Top

The shot was taken in the caribbean, on Curacao to be precise.

The proctodeal trophallaxis is when antlarvae secreed a sweet fluid from their behind and the workers eat it.
Or was that in bees??

Ohh bother, I now have to rethink my Id on this one. I was assuming it was taken in the Netherlands which made Formica the obvious choice based on the characteristics I could see. Since it is from the caribbean, Camponotus is the more obvious culprit. However the features needed to be sure are not readily visible in the photo.
Many thanks for correcting my spelling I realized I had made the mistake after I posted but I was running out the door and had no time to fix it.
Bruce, there are a huge number of websites out there which all to some degree deal with those questions I will try to find a good general one for you.
Http://www.armyants.org
Http://www.notesfromunderground.org
Top

What features do you need? I can make some "detail"shots if you like. Though this is about the closest I can get, maybe a bit more. Have to get me another lense here.

Tom
many thanks for the offer, I cheated though and had my dad look at the image. He forgets more about ants everyday than I will ever know. He confirms that it is indeed a Camponotus, possibly C. blandus or one in that group. What threw me was the mistaken locality and the extreme pilosity of the body as I know of no Campy with that much fine appressed hair from either the U. S or Europe. So the hair screamed Formica and the lateral view of the mesosoma screamed Camponotus. For future reference though a good side shot and good full face view can make a big difference in ease of identifications. One question would you allow me to use the image as the lead in image for the next issue of Notes from Underground I put out??
Http://www.armyants.org
Http://www.notesfromunderground.org
Top

Always happy to see my work turn up somewhere.
Need bigger size or res. for the page?