Thought that I had exploited this subject as far as I could take it but it seem that through my perseverance in searching out new species of Cordyceps in insects, I keep coming across something new. For those of you interested, I happened across this structure protruding from the fruiting body of the fungus as it rises from behind the ants head. I have seen hints of a bulge in other specimens but none like this. The first image shows the ant clean, no arrows, circles or anything like that just for the sake of aesthetics. The second shows a circle around the unusual and yet to be named or identified object. 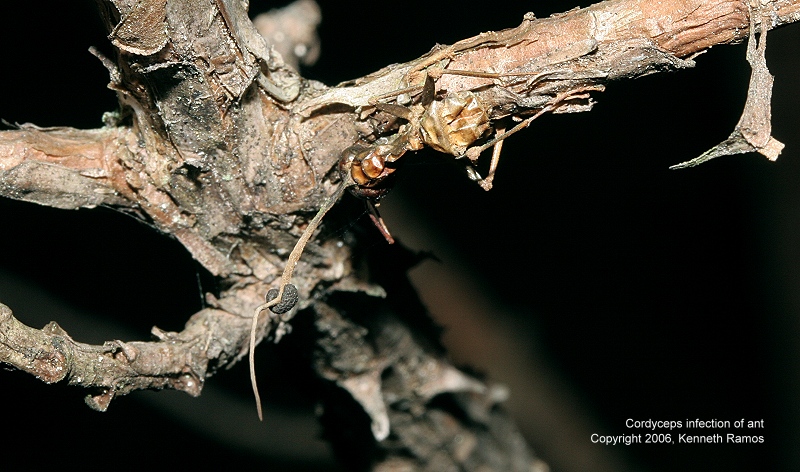 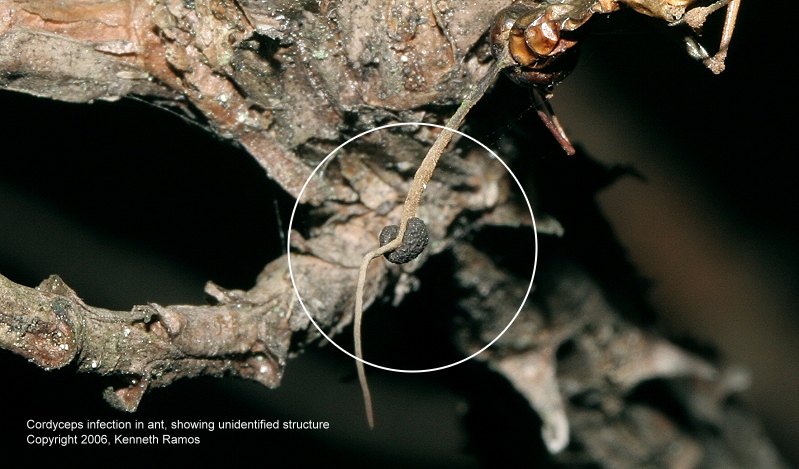 As you can see this thing looks somewhat like a gall, that one would find on various weeds this time of year. Spore producing? I would think so but then again I have only began to research this infection. Don't ya just love pathogenic fungal parasitism.

This is cool stuff, Ken!

I figure there's quite a bit of life left in this topic.

I am currently working on the first part of your request Rik, don't know how successful I will be but I'm working on it. As for the rest, yep me too, I would indeed myself be interested in seeing all that. Thanks!

Another nice find Ken. Very interesting structure on that thing. Are you finding all the ants on the same tree or area? Are they all the same species? In that YOUTUBE video, it stated that it could infect a whole colony. Might be interesting to monitor the area in the spring and find the colony and keep an eye on it for fresh signs. Happy and safe New Year to you and your families everyone.
Take Nothing but Pictures--Leave Nothing but Footprints.
Doug Breda
Top

Most of the ants are pretty much alike, with the exception of a couple of those that are much larger but they all exhibit the same Cordyceps type infection with the long ribbon-like fruiting body. The only exception to the disease has been that grasshopper find and it's fruiting bodies of course are much different, going to have to research that. So I am assuming that this too is Cordyceps, just a different species. The area of the infection does not seem to be localized but spread out over a good bit of my backyard or my neighbors field behind the house I should say, however there is one small Gray Dogwood that has numerous ants on it, all infected, but that could just be because of the colony of ants being so close to it. However when summer or spring comes along, I will be monitoring the ant colonies around here a bit more closely, instead of just looking for a subject for a macro.