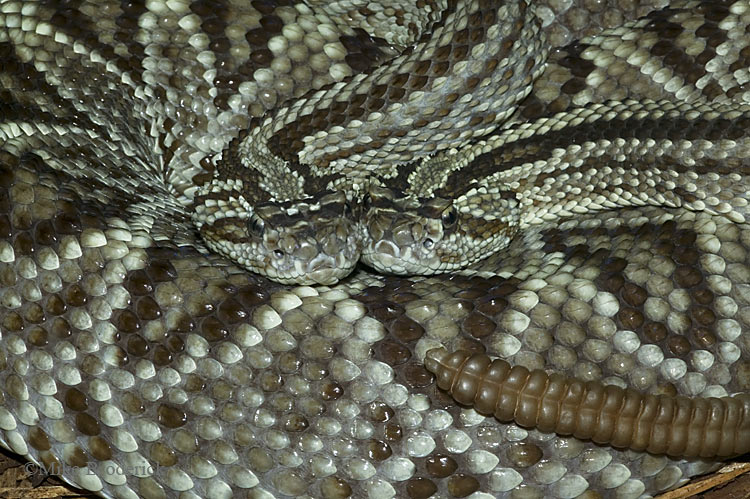 More Guyana Rattlesnakes in love, different pose. I've never read anything about this in books, but I'm convinced it was a deliberate behavior, not just chance. The snakes were together as in the previous shot for a few minutes, I got some shots, one of them moved, and I thought that was the end of it. Then I came back a few minutes later, and they were in this similar, but different pose! I took the opportunity to get some different shots, including this wider one.
Top

Great capture of the two heads side by side.

For some reason, probably the patterns, I had my troubles even finding up and down in this picture, and had to rely on your text to find the head of the snakes. Now the picture makes more sense

Quite interesting when a hard look is needed, at least it was for me.

They sure blend in well together Mike.

Reminds me of a pile of beads. That sure is a big rattle. You know a nice hat band could be made from one of those, among a few other things. Wonder how they get away with that since rattlers are protected these days? I know they make fake skins but every now and then you find the real McCoy.

I know for sure that diamondback rattlers aren't protected in Texas and Oklahoma....I don't care much for the rattlesnake hunts they hold, but if you really want a rattlesnake hatband, I assume something could be worked out...
Top

You know, this would make a good puzzle....
Top


You know, this would make a good puzzle....

Indeed it would! Something to work on for several rainy days.

Yep, I see a puzzle here

These snake images are great. I never see things like this when I go to the zoo, but the zoos I go to never have two snakes in the same case.
Sue Alden
Top

The scales look very pearly & beautiful...I wonder if they just did a shed of their skin...thats when all snakes are at their best

The shot is fantastic. I think this is reptile love at its best