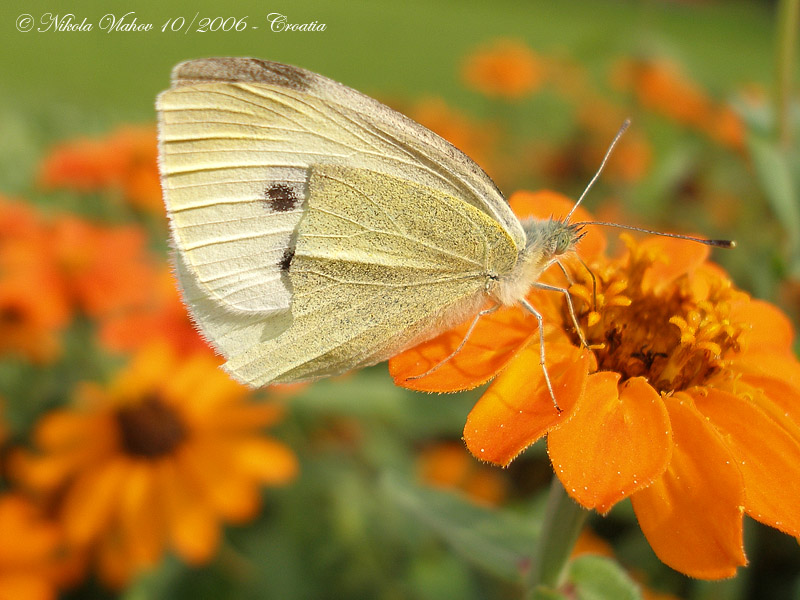 Check your ID, though. Typical Pieris napi does not have those two distinct dark spots that yours has on the front wing, and does have dark scaling concentrated along the veins that yours does not.

I'm pretty sure that you have Pieris rapae, what we here in the U.S. call the "European Cabbage Butterfly" or the "Imported Cabbageworm".

There's an interesting story about the ecology of these beasts here in the western U.S.

Quoting from "The Butterflies of Cascadia" (pg.139),

Robert Michael Pyle wrote:Authors have alleged for decades that our native species of Pieris have retreated as a direct result of competitive exclusion by introduced Cabbage Whites. There's no doubt that some have diminished. But research by Francie Chew has shown conclusively that Cabbage Whites are tolerant of anthropogenic conditions, while the native whites have withdrawn before development and agriculture; and that some introduced crucifers attract oviposition, but prove lethal to larvae. Thus [European] Cabbage butterflies have become a scapegoat for habitat displacement brought about by people.

I have great respect for the Cabbage Butterfly. ... It is quite pretty, very abundant, ubiquitous, and exceedingly adaptable. ... It didn't force out native whites, as the folk tale holds; rather, we made the habitat suitable for the alien and unacceptable for the native. The Cabbage White is here to stay, so we might as well enjoy it.

Personally, I think they're a lot prettier up close than far away. Your picture is a great example!

The orange color is fantastic. great shot Nikola and thanks Rik, for the interesting info.
Take Nothing but Pictures--Leave Nothing but Footprints.
Doug Breda
Top

A very nice and colorful image there Nikola, I really like the way the camera captured the texture of the wings. Nice work!

I've compared my own Pieris napi photographs with this one and must say you are very right Rik.
Thank you very much.
Topic title corrected.

By the way, I think the flower is a sort of Zinnia.