This is a work-in-progress that I thought you might enjoy seeing. 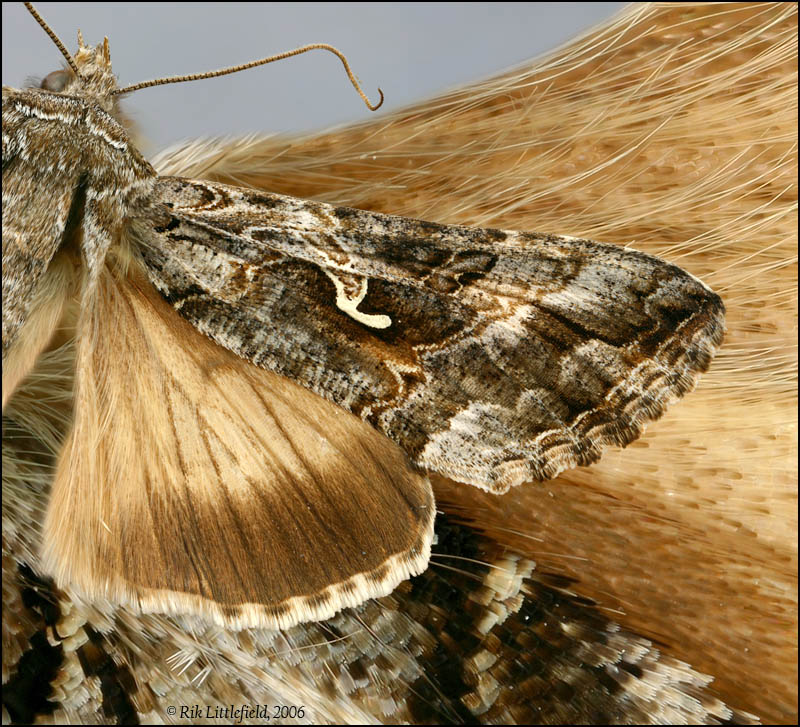 The background image is a 6X blowup of part of the foreground, flipped for artistic purposes. In the full-size image, the whole moth is rendered in a bit more detail than you can see near the bottom of this 800-pixel version.

Field width for those images is only about 9.5 mm.

The moth is a lot bigger than that, so I shot multiple stacks, rendered each stack to a single image using Helicon Focus, then quilted those together using PTGui, a panorama stitching tool.

It's a pretty time-consuming process, one of those labor-of-love things, but I like the final results.

This version still has a few glitches and I'm not completely satisfied with the matting, but it's coming along.

Looking good Rik, really need to look at the 'big picture' to appreciate the detail.

Did you use any back-lighting?

Wonder how big resolution could be achieved using this method. Maybe for a big wall size poster with lot of details still visible under magnifying glass. (If software and hardware are strong enough to deal with it.)
BTW, is it known as a silver Y moth, I guess?

Beautiful image there Rik, really like the details in this.

I can see the possibilities in doing this Rik. Looks super. The flip was a very good idea. I know you will get it down to a science and streamline the process

I'm pleased to see your "Stacking & Stitching" project is progressing. This is really a great image. If you consider this as "work in progress", what are aiming for as as a final image?

I notice you used PTGui for the stitching. I've tried to use this program for stitching, but have not had good results so far. However, your image shows it can be done well. I'll just have to try a bit harder.

Love the detail visible in the full size image. Have you any idea what purpose/function the little white prongs in the top-centre of the forewing perform?

I have also been making Stiched Stacks recently for an art project. And coïncidentally one is of butterflies and I also used blown up parts as a background. This way it will fit with the rest of the colours. I'll post some, o.k?

It requires some computer processing and a lot of patience:) But you can make huge prints!

Thanks for the comments/questions, guys!

Ken and Doug, yes, many possibilities with this technique. This is the largest that I've done, and the process clearly suffered from not enough planning. I should have prototyped the whole thing using low-resolution imagery before starting to shoot high res stacks. Instead, the project sort of started with a couple of test stacks, and grew outward. Kind of like the software business -- altogether too often, you end up shipping the prototype!

George, glad you like it. I'll try to post out a description of how and why I use PTGui for this problem. I've been knee-deep in panorama software since all that existed were command-line tools, so most likely there are some tricks I just do without even thinking about them.

As for the "work in progress", judging from the time of your posting what you saw was actually revised from what I posted at first. I had time to clean up a couple of stacking/stitching artifacts and also to kill some color fringing around the edges of the wing. What's currently posted is now out for printing. It'll probably be good enough for a display print, but most likely I'll find a few more things to tweak before I do a final version for the person who unknowingly "commissioned" it.

Bruce, I'm not sure which little white prongs you're referring to. In the middle of the forewing, there is a large curvy "Y" composed of many ivory-colored scales. It's the topic of this posting. That mark is a distinguishing characteristic of the genus, but I've never read that anybody has a clue what its purpose is.

Then at the bottom of the picture, in the blown-up background, you can see a half dozen very sharp prongs, pointing down in the picture. Those are actually loose scales, from somewhere on the body I think, that got caught up in the wing scales and didn't come loose when I dusted the critter with CO2. I didn't notice them until I had already shot the stacks, and then I decided they were so interesting that I'd highlight them in the montage.

I don't know why you used blown up parts as background, but I remember distinctly why I did. It was after I had the stacking and stitching done. I was trying to figure out how to put the package together, and I was getting frustrated because the image had all this wonderful detail that unfortunately was so small that you had to get right on top of the thing and maybe haul out the reading glasses to see it. I think I had seen big fuzzy backgrounds used before, and suddenly it occurred to me that if I just blew up a bit of the foreground and used that, I could simultaneously make the detail visible from a distance and add some interest to the overall image. It's working out OK, I think.

Some folks may not like the chunk of solid gray background, but it works OK for me, and it's in there for a couple of reasons. The first is for color balance. Without something neutral or bluish in the image, the brown stops being perceived as the color of the moth and starts being perceived as an overall color cast to the image. I originally shot that part on a brown background, and had to redo it.

The other reason is that the antenna has some really cool fine detail to it that I thought would probably get lost on any sort of textured background. Take a look at the full-sized image and you'll see what I mean.

Huge prints, well, yes, you could. This one's destined to be printed at 12 pixels/mm (305 pixels/inch), so the image will be only about two feet square -- and looking crisp as close as anybody will get without a magnifier.