This is my first posting here, apart from a brief comment on Graham's Loxodes video. These rotifers look like those posted by Franz last March, identified by Michel as Euchlanis sp. Am I correct to assume they are the same species?

Thanks in advance for any assistance! 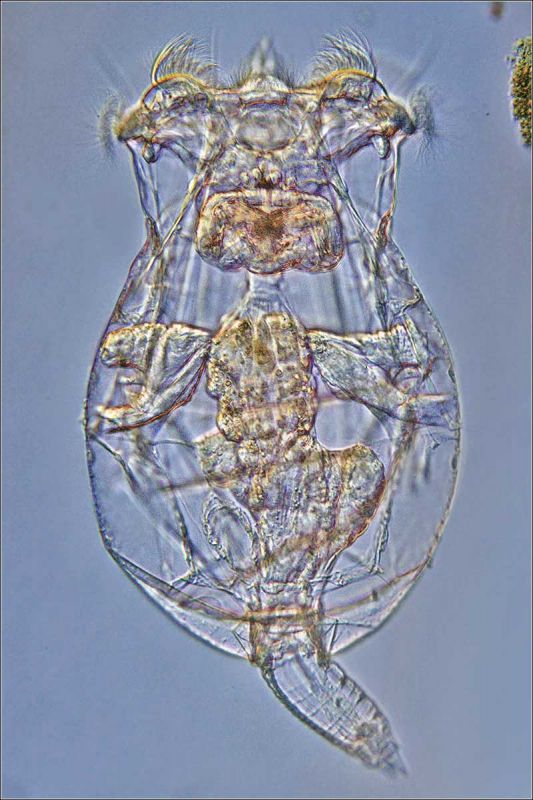 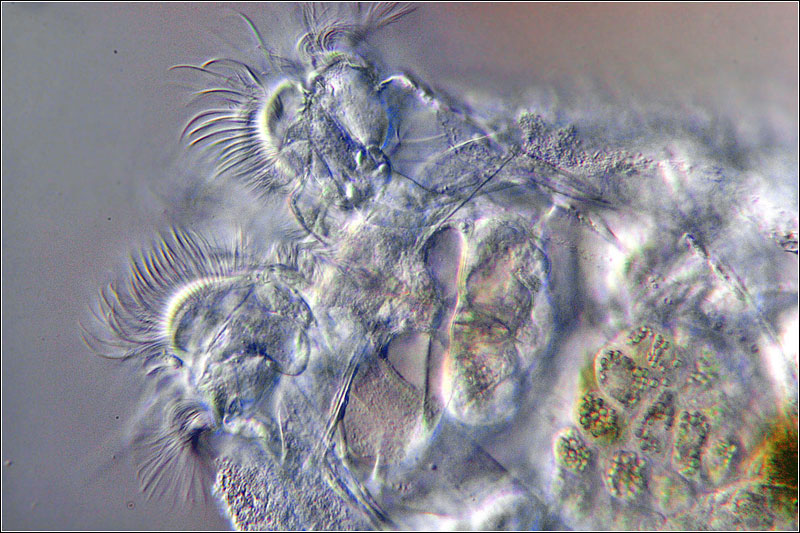 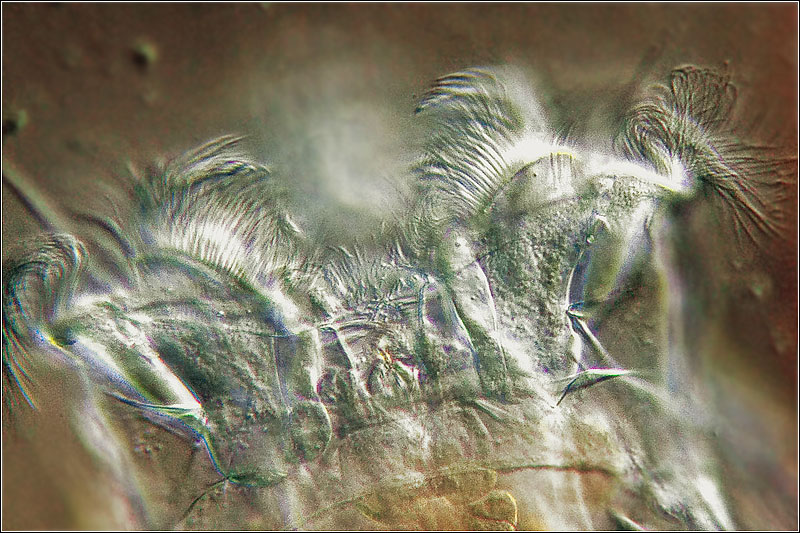 I can't help you with the ID, but I'm interested to know more about your equipment and lighting. Image #1, in particular, gives me more impression than most pictures that the rotifer is transparent. I don't know why this is -- possibly the blue background? In any case, it makes me curious.

I did some browsing in Voigt/Koste, Rotatoria. As far I see your excellent pictures do not show an Euchlanis: head and foot are different.
Unfortunately I could'nt find an alternative, so we have to wait for a specialist!

Beautiful pictures. I too would be interested to know your microscope setup and camera you are using. Is this DIC, oblique .....? It's giving a super result whatever it is.
Leitz Ortholux 1, Zeiss standard, Nikon Diaphot inverted, Canon photographic gear
Top

I'll put my money on Brachionus, but which species?
Graham

Nice pictures.
It is a Brachionus and problebly Brachionus angularis
Most common in autum.
Greetings
Jan Kros
The Netherlands
Top

Rotifer ID - thanks to all

Many thanks to all who commented on the shots of a rotifer species I was unable positively to identify. I am most grateful for the knowledge so readily shared - a most appealing feature of amateur microscopy - and am sure Graham Matthews and Jan Kros have settled it for me. In fact I may have seen Brachionis in the past but these were the first I had the chance to photograph with my rudimentary flash rig. I brought some specimens back from a dip in a rain swollen ditch in Northern France earlier this month and added them to a desktop aquarium which houses a variety of ciliate and rotifer species.

In response to requests for details of my set up I have to say it follows a well-trodden path. Inspired by some of the marvellous work on this forum from Charles Krebs, Graham and others, I started the search for an affordable DIC stand and a few weeks ago acquired two (!) reasonably (?) priced Leitz Orthoplans, one with DIC, the other with phase contrast. Earlier experience with a remote flash firing through the halogen lamp on a Nikon Eclipse E400 had been fairly successful in stopping movement so I tried the same system on the Orthoplan. The prominent lamphouse on this model makes for a big footprint and the added flash unit made it even bigger, too much so for my untidy workbench. I then reverted to the "classic" system using a 45 deg. reflector over the field lens with the flash firing in from the side. A Delrin reflector holder was turned in the lathe and I tried a coverslip as the reflector. It worked, but not too well. That led me to invest in a plane beam splitter (from Knight Optical in the UK), a pricey item but it provided the perfect solution.

My microscopy camera is a Canon EOS 450D/Digital Rebel XSi with a Nikon 1.6x relay/photo lens. The results are reasonably satisfactory but the captured image is but a small part of the image seen through the microscope. The flash unit is the ubiquitous Vivitar 283 but I have also tried the Sunpack Autozoom 2400, an excellent flash unit. Practically all of my experience with flash microscopy is based on the work of others, details of which they have made available on the Internet. Ron Neumeyer, Graham Matthews and, above all, Charles Krebs have my sincere thanks for guiding me on the way. Charles's superbly presented commentaries on his flash photomicrography systems are an outstanding resource and their availability on this Amateur Micrography web site is surely one of the jewels in the crown!

A few shots follow to illustrate my set up and some results. These are from permanent mounts so flash wasn't strictly necessary but I like to use it nevertheless; it eliminates problems with vibration, as Graham has pointed out in his recent lecture notes. 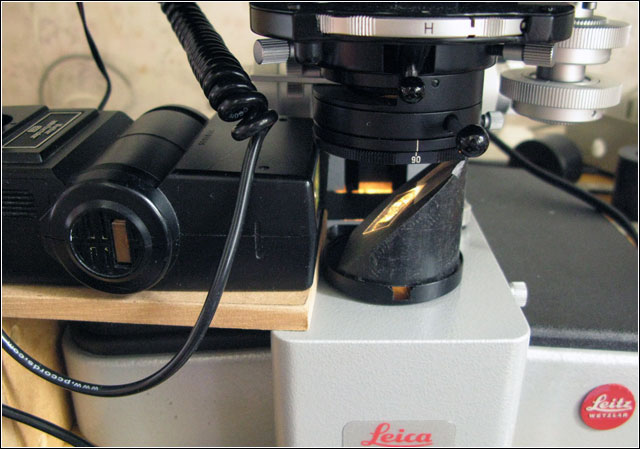 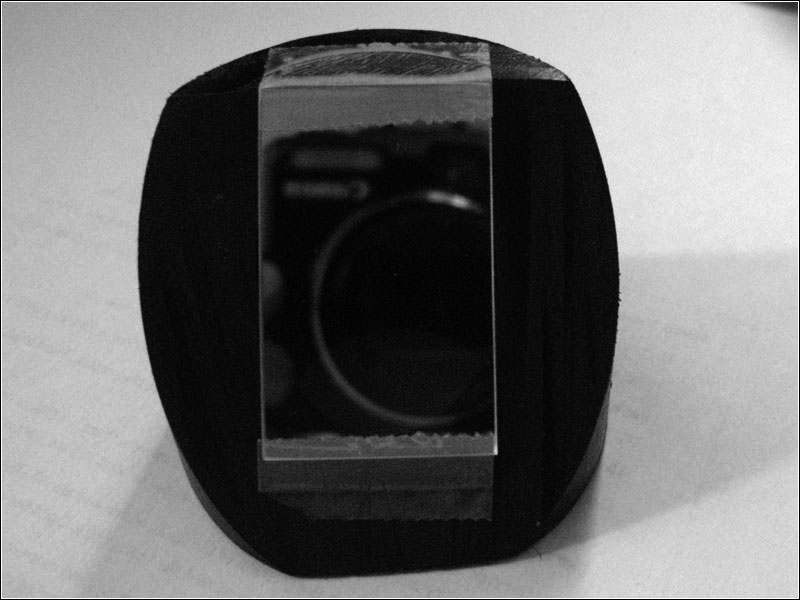 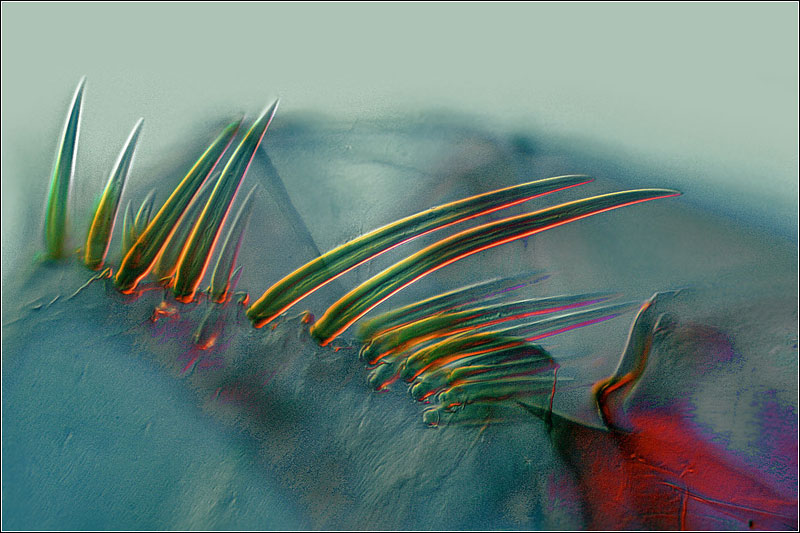 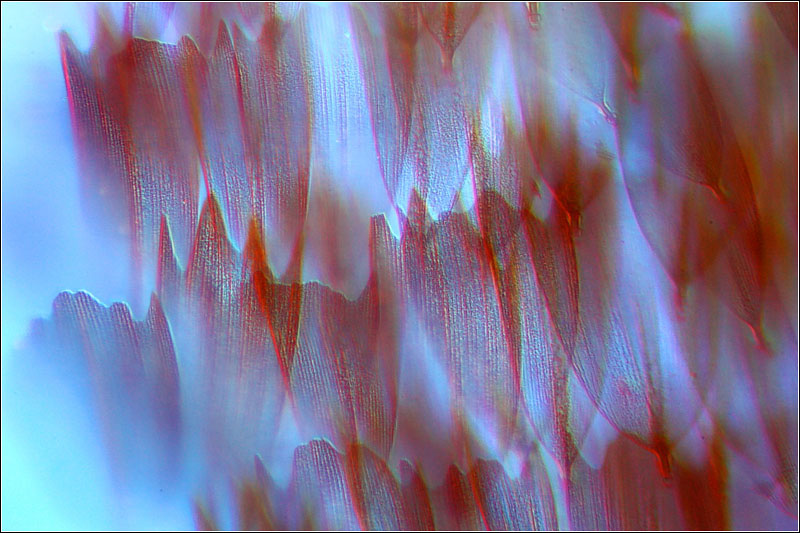 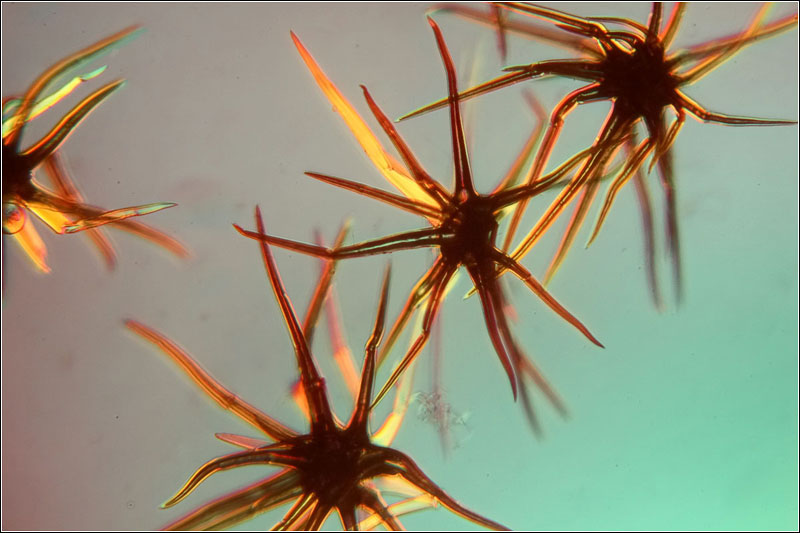 Thanks for the information. You are very fortunate with your setup. To acquire a DIC equipped'scope at a reasonable price is a coup indeed, to acquire a second nice phase 'scope at the same time seems almost greedy!

Well, Dave, fortunate or not depends on how near you are to that hole in the ground! My car is 12 years old but, since it will easily outlast me, instead of a new set of wheels I have a modest kitty for the odd indulgence now and then. OK?

If I were an emoticon fan this is where a great big grin would appear!

And I thought Graham was a Zeiss man!
Top

Aha - you obviously haven't seen this:

Wow, what a wizard hybrid! It looks like a pro machining job but with that condenser who could resist having a go? Well done - and your results are superb so you have all the skills it seems!
Top

I'm glad you have found some of my info on my site helpful. Thanks for the kind words.

The 45 degree beam-splitter over the base lens works great for flash. If you have the room to set it up comfortably it's a good way to go. Unfortunately with some stands there doesn't seem to be a way of doing this without things getting cluttered and in the way.

One thing you said puzzles me...

My microscopy camera is a Canon EOS 450D/Digital Rebel XSi with a Nikon 1.6x relay/photo lens. The results are reasonably satisfactory but the captured image is but a small part of the image seen through the microscope.

A 1.6x relay/photo lens should be a near perfect "fit" for the 450D. You should be recording a "field number" of about 17mm, and with typical 10X eyepieces you will be seeing a field number of about 20mm. Are you using eyepieces with a superwide (~26mm) field number? If not, then I wonder if the 1.6X optic is positioned too close to the microscope. Increasing its distance from the objective would lower the magnification in the camera (the camera would need to be positioned closer to the 1.6X optic).

Many thanks for those helpful comments and yes, I am indeed using eyepieces with a superwide field number which probably explains the anomaly you spotted.

Leitz seemed to be very pleased when the Orthoplan was introduced. The company's brochures variously described it as a Universal Largefield Research Microscope and a Universal Widefield Microscope. The design uses 30mm eyepieces and was hailed by the makers as "the first instrument designed for a field of view of 28 mm" According to Leitz the Orthoplan was designed specifically to exploit the high field performance of the company's plano objectives. The 28 mm field of view requires the use of Leitz GW 6.6x oculars, 8x gives 26 mm and 10x oculars give 24 mm. I use a pair of 10x oculars although the 8x are recommended for use when using the interference contrast specification; 8x eyepieces would presumably reduce even further the proportion of the f.o.v. that could be captured with a 1.6x relay/photo lens so I will stick with the 10x eyepieces.

Months before I bought the Orthoplan a friend alerted me to a Leitz Vario-Orthomat zoom relay/photo lens on eBay and, unable to resist, I secured it. It will need a little work to adapt it to the Orthoplan but I have high hopes of it providing a solution to the cropping problem. If anyone on this forum has any experience of the Vario-Orthomat I should be most grateful for any hints and tips.

I thought that would be the the case. I had a vague recollection that these had the 30mm tubes. With that camera a relay mag of about 1.25 would do the trick. (Although some people do seem to prefer a little more "crop/magnification").

If the camera height is adjustable, you could try "raising" the relay optic in the trinocular tube. That will give you less magnification, but you would want to check image quality, especially at the corners. (A modest amount usually doesn't seem to impact things negatively, but at some point the image does degrade).

I have a Leitz Vario-Orthomat photo eyepiece which was taken from an Orthomat film camera. It is a heavy and impressive chunk of high quality glass with a variable zoom between x5 and X12.5. I have some experience with using it as a photo eyepiece in combination with a dSLR and know another user who has used it more extensively with a dSLR and a C-mount video camera. To do it justice, I will try to gather my information on it and perhaps start a new thread on it in due course.
Leitz Ortholux 1, Zeiss standard, Nikon Diaphot inverted, Canon photographic gear
Top
Post Reply Previous topicNext topic
25 posts