Of Armies and Agriculture

Of Armies and Agriculture

Sunrise over the Amazon: 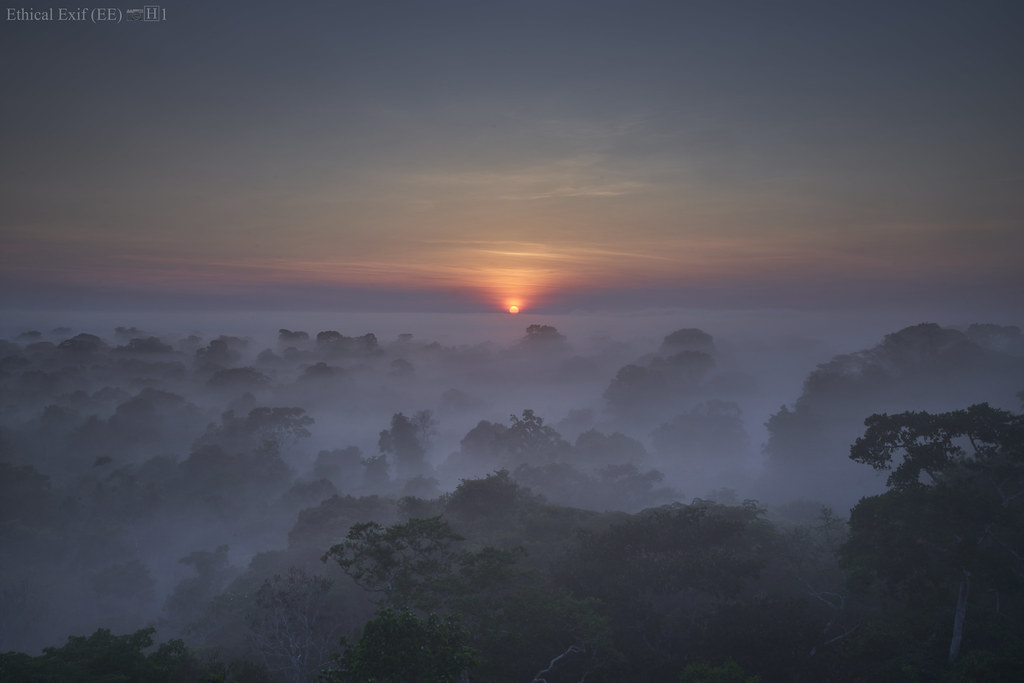 An army ant (Eciton burchelii) soldier has curved mandibles so large that it is physically incapable of grooming itself and relies on medium and minor caste workers to clean it. The jaws, with their backward fishhook-like spines are difficult to remove and are purported to be used by jungle natives as makeshift sutures: 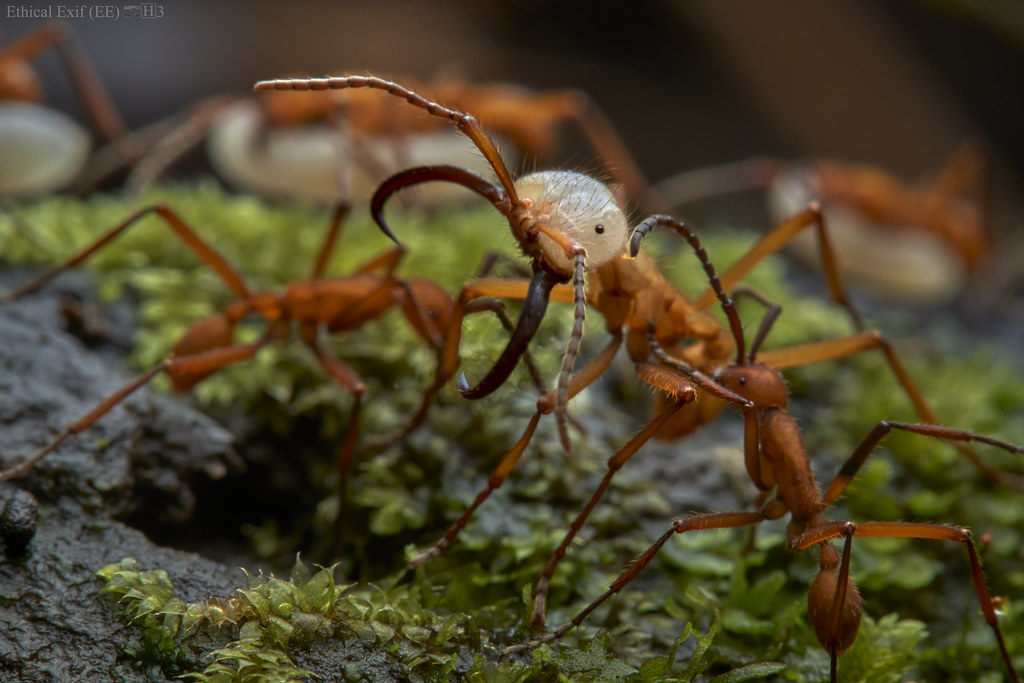 Army ants follow a biphasic lifestyle; a statary phase in which the column remains stationary while the queen lays eggs, and a nomadic phase in which the colony moves from one location to the next (forming a temporary nest (bivouac) from the interlocked limbs of thousands of ants). The hugely successful predatory strategy of these ants has led to a number of mimics, and ant-associated species. Some of these follow the army ant column and benefit indirectly, like some ant birds. Others are more insidious and live within the colonies themselves, parasitizing their hosts by feeding on the larvae, or snatching food that has already been subdued and dismembered. Within this column can be seen a silverfish (Trichaletura sp.) and a staphylinid beetle which mimic either the physical, biochemical (or both) form of their host ants: 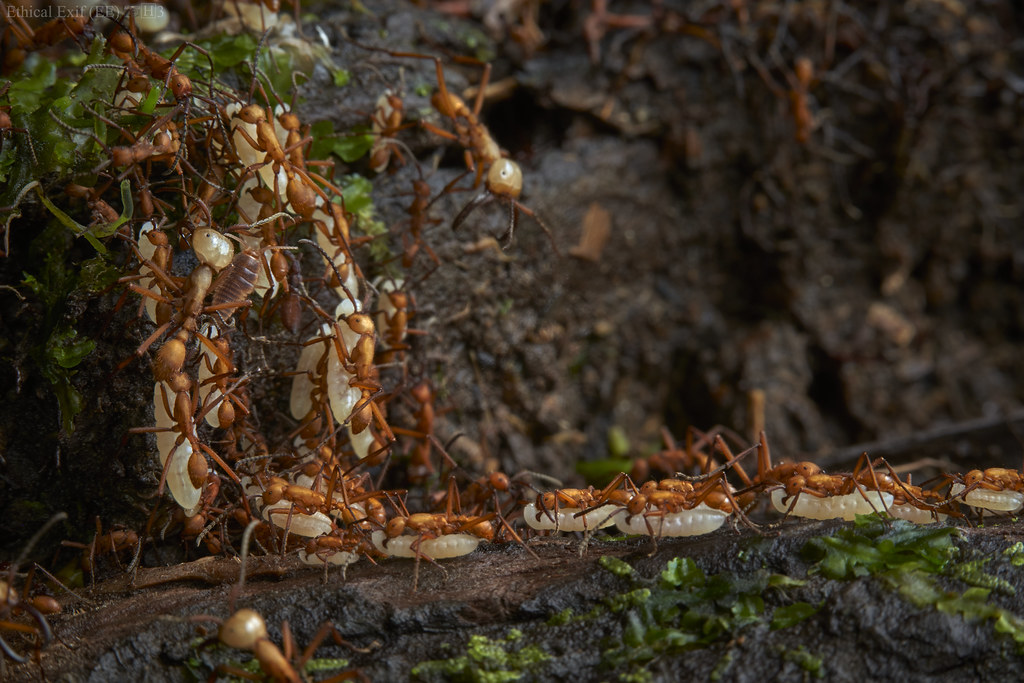 Army ants (Neivamyrmex sp.), a more subterranean species carry an earthworm to their nest. A passing a rove beetle (Vatesus sp.) which emits the same biochemical signature as the the ants runs opposite: 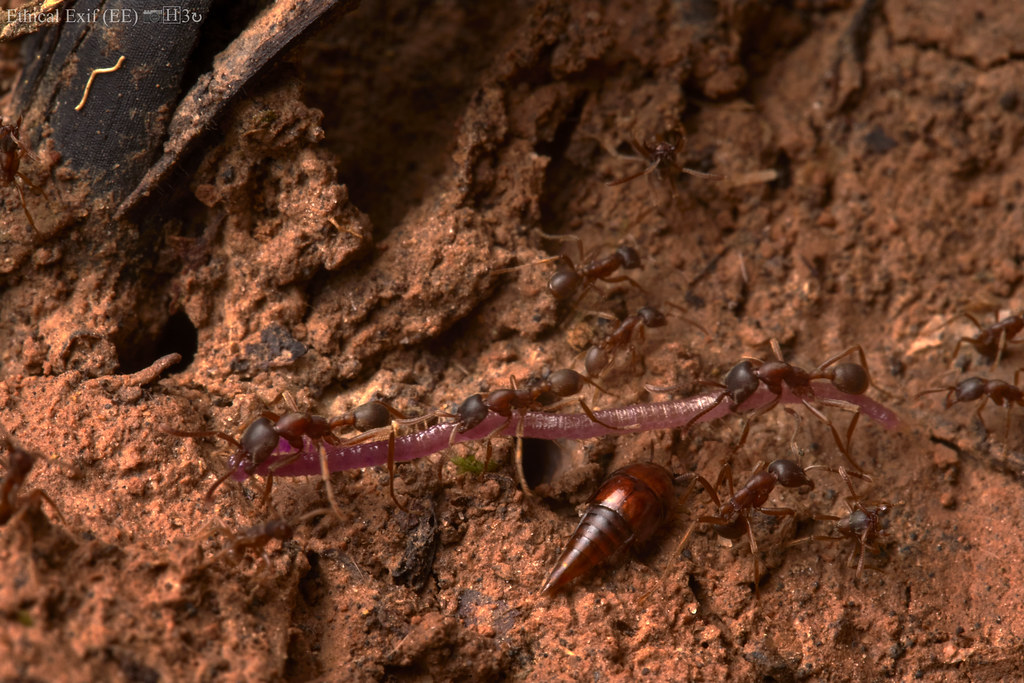 By interlocking their limbs, army ants are able to form superstructures. Individually they can fill in holes in leaves and branches which would otherwise disrupt the flow of traffic. Communally, they can build bridges and even a temporary nest (bivouac): 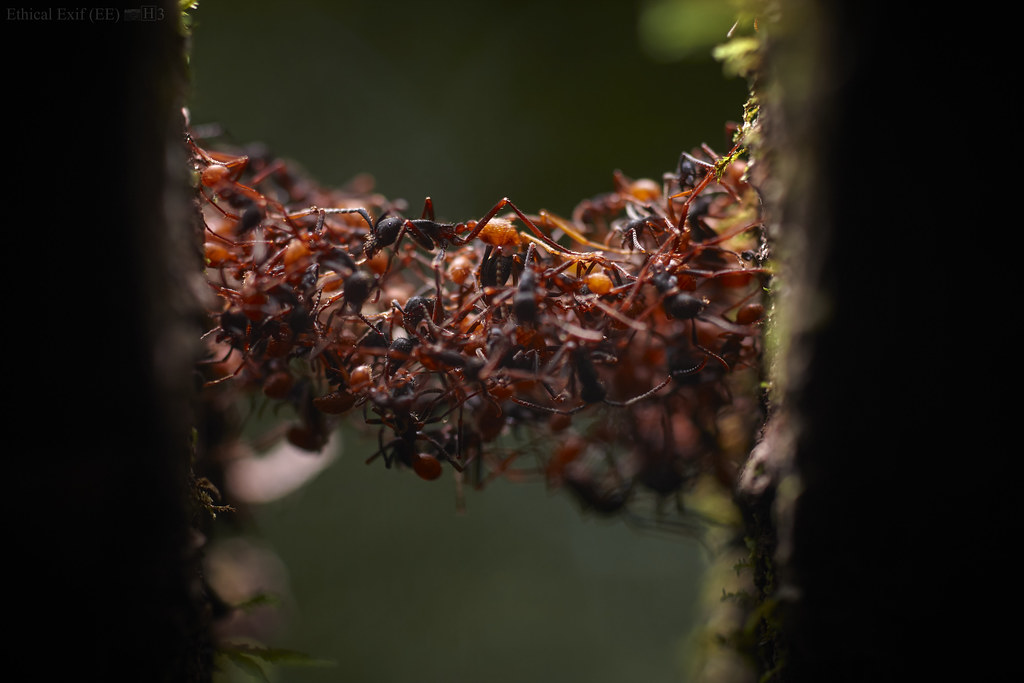 It's not uncommon to see army ant (Eciton burchellii) colonies reaching sizes of up to several million ants. This numerical superiority, in addition to their natural aggression has enabled them to dominate and shape the understory. Here, a raiding colony has subdued another major player in the understory, the leaf cutter ant. The leaf cutter ant nest (Atta sp.) has been defeated and a pile of collected brood litter the entrance, which will later be transported back to the army ants' own nest: 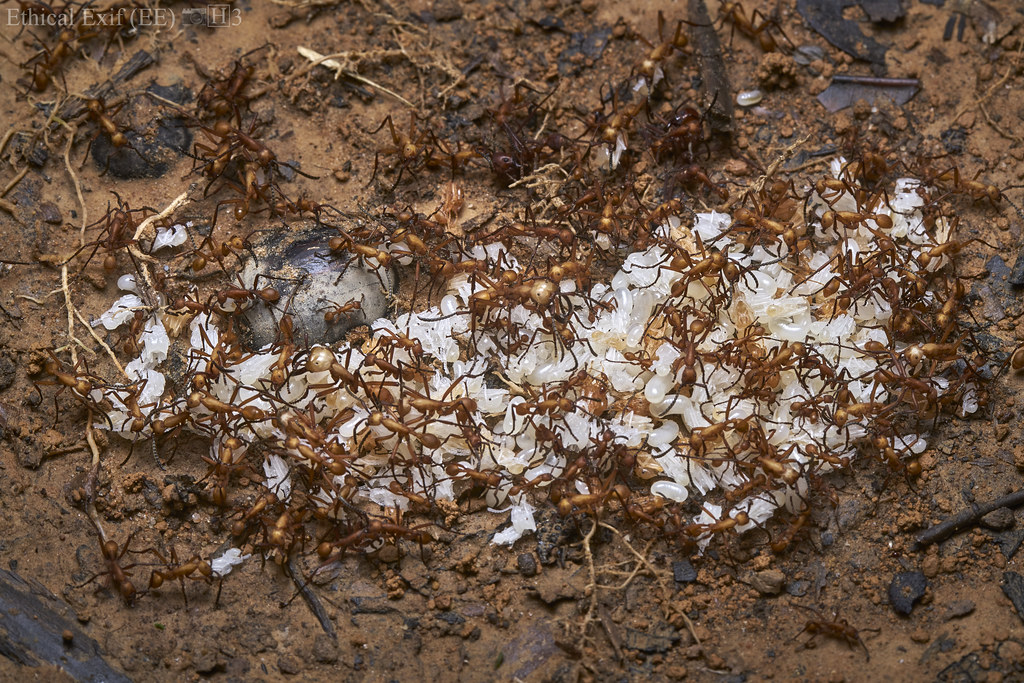 During the rainy season, winged queens leave the lea cutter ant nest, mate, lose their wings, and excavate a new nest before beginning to lay their eggs and found a new colony. These queens carry in their mouths a fragment of the mother fungus which will nourish the future colony: 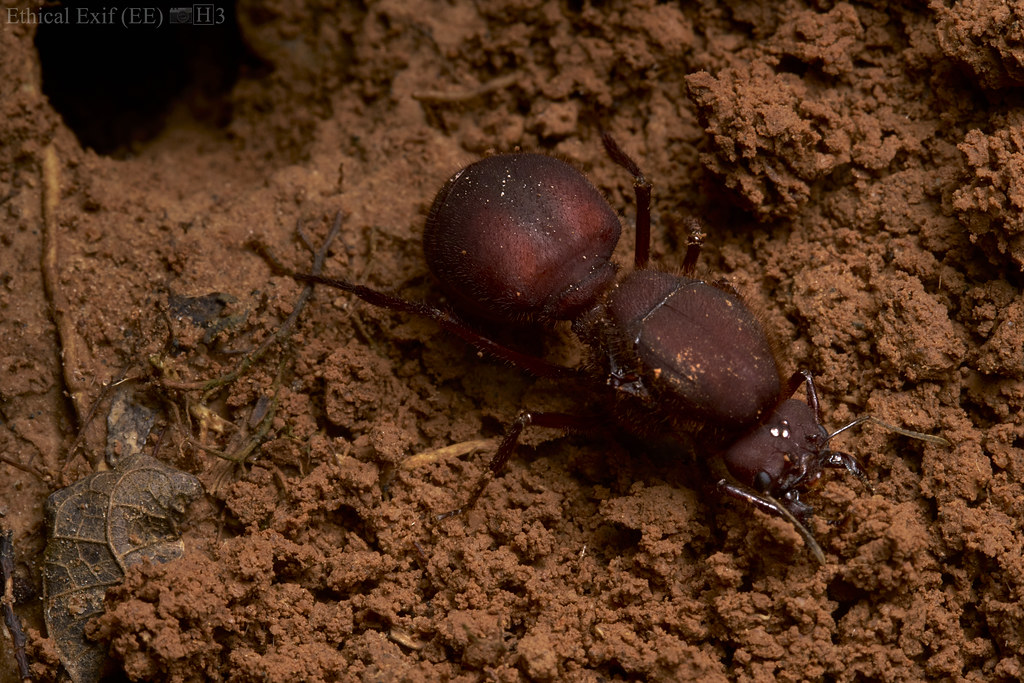 However, these new queens do not yet have the benefit of a colony of workers to protect them. At this vulnerable time, many a new queen falls prey to a variety of predators, like these hunting ants (Ponerinae): 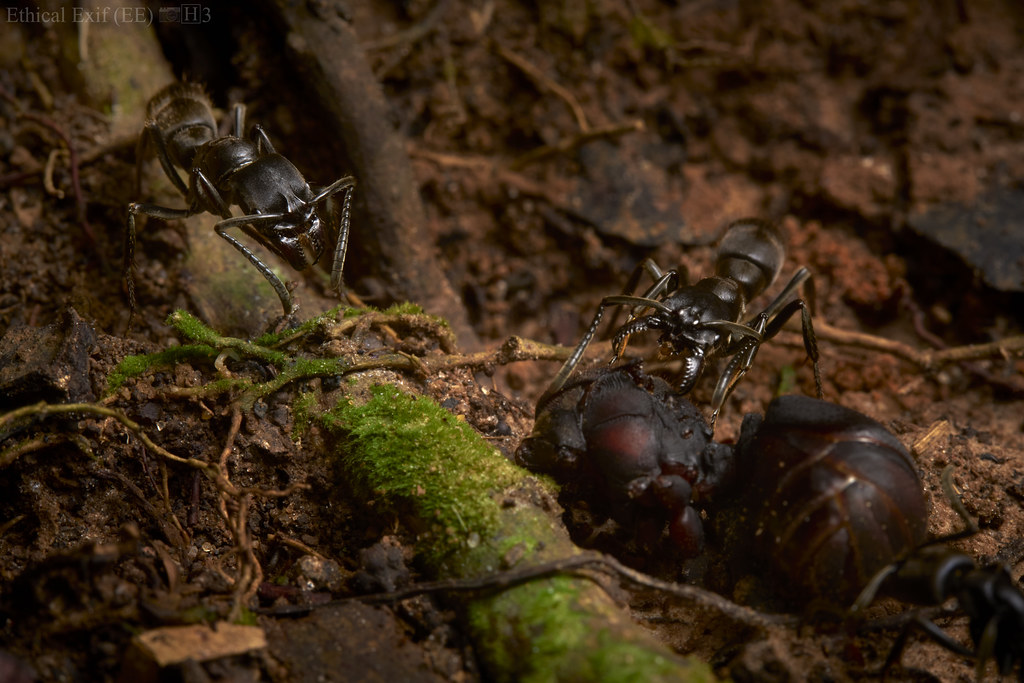 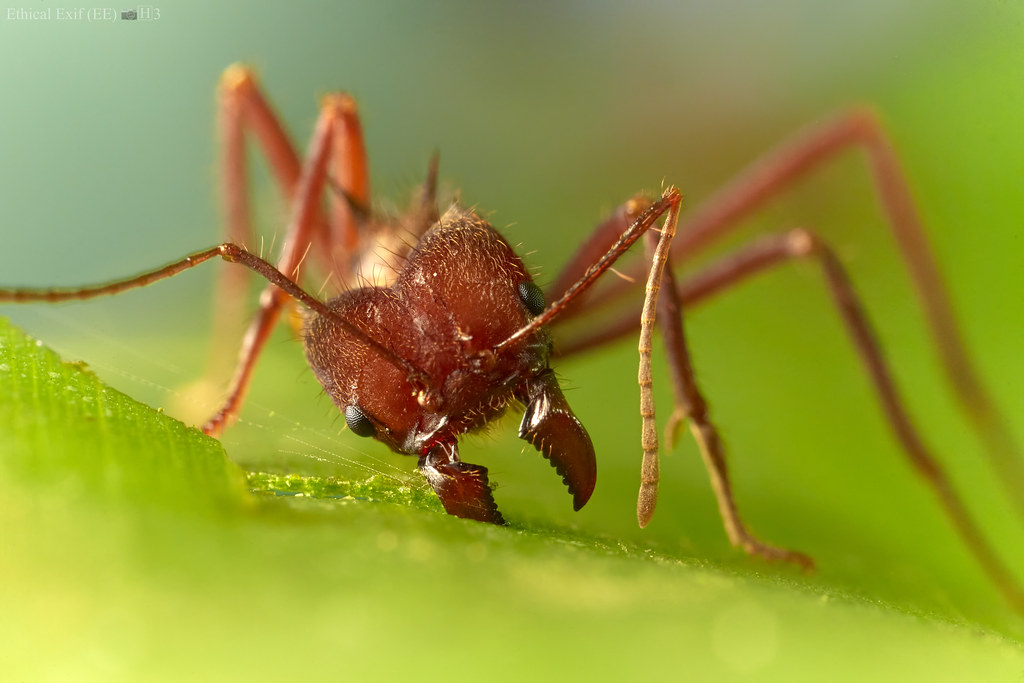 Leafcutter ant carrying a leaf back to the nest, which will be mulched and used as a substrate for a fungus which will be harvested and ultimately provide food for the colony: 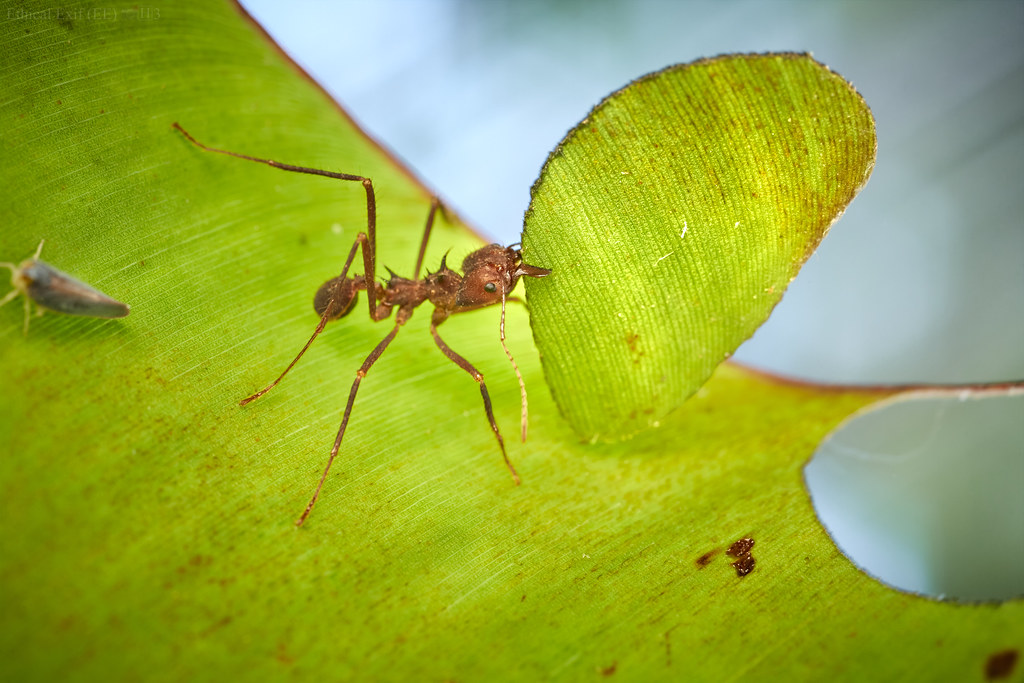 Fantastic Post. Thank you. The narrative coupling the excellent images is very informative.

Thank you for posting.
Top

Amazingly well photographed. Photographing army ants is really hard. You have to watch to make sure you are not touching any branches or moving your feet, else you get swarmed. It is hard for most people to get any pictures at all. Yet yours are intimate and perfect. Great job.
Lou Jost
www.ecomingafoundation.wordpress.com
www.loujost.com
Top

Thanks everyone, most appreciated.

Lou- Army ants I find to be very situationally dependent. When they are raiding they are exceptionally aggressive and scout new territories. When they are in file and in column they are less of an issue if one approaches gently and doesn't create too much in the way of ground vibrations. The other option I've found is to set up my camera with bluetooth live view on a ground tripod and photograph remotely. This is only possible with army ants, or long, large predictable columns of ants, since one can't adjust the framing readily.
Paul
https://rainforests.smugmug.com/
http://www.flickr.com/photos/31137609@N08/
http://pbertner.wordpress.com/
Top

The other option I've found is to set up my camera with bluetooth live view on a ground tripod and photograph remotely.

That wasn't available back in the days when I was doing my army ant photography. I was interested in making videos of the antbirds that follow the swarms, so I had to be in the active swarm. I found that if I didn't move my feet at all, and if I wore rubber boots, the ants would usually not crawl all the way up my boots onto my pants. But I often ran into trouble if some part of my body was touching vegetation.
Lou Jost
www.ecomingafoundation.wordpress.com
www.loujost.com
Top

Love the level of great information - one can't help fall in love with their amazing teamwork and strategy!
Brilliant and enjoyable set..keep em coming

Thanks Lou and Hayath, much appreciated.

Lou- I use the same technique when photographing raids, sometimes a little vaseline towards the top of the boots will also help discourage the stray entrants. You can't spell beware without aware... One must certainly be very self-aware of one's position, otherwise the ants will make you aware!
Paul
https://rainforests.smugmug.com/
http://www.flickr.com/photos/31137609@N08/
http://pbertner.wordpress.com/
Top