I've got most of the drilling and tapping of things done using my Harbor Freight $65 Drill Press and cheap drills & taps.

The 2 US Automation (THK KR15) rails have been modified by removing all the electronics and directly wiring the NEMA11 motors to a connector. One rail is mounted directly on top the other at 90 degrees, these will be used to move the subject. I've modified the stage plate to allow a 1/4-20 mounting, and as shown a small ball head is attached which has an 1/4-20 adapter to allow an alligator clip for subject holding. The bottom KR15 is mounted to an ARCA clamp or a larger Thor Labs 95mm clamp which has tapped holes for all sorts of rails and things (see image). The somewhat portable system can accommodate either Vertical or Horizontal orientation as shown on the modified WeMacro Vertical Stand which is used in Vertical and Horizontal modes. Later I'll be using a more sturdy vertical section (40mm square) for the Horizontal setup to hold the 2 KR15s. The Precision setup uses a Thor Labs 95mm based optical setup. The Z axis will hold the camera/lens and is a THK KR20 or KR26 (KR20 shown).


The Raspberry Pi 3B and 3 motor controllers with USB cables are the S&S Control. The controllers use motor energy recovery which allows all 3 controller to operate with only a small 12V supply (I'm just using 2.5A now, but will use a 5 or 6A later). This can be operated directly by keyboard & monitor (HDMI) or wireless by WiFi with a remote terminal.

As my programming skills improve I've been able to incorporate some error handling, simple file R/W management, 3 axis supply voltage monitoring, camera and delayed strobe triggering. All the 3 axis parameters and camera/strobe/image capture details (pulsewidths, delays and whatnot) are table based for easy adjustment. Motor and rail parameters are also table based and some include controller file interfacing (motor max speed, start speed, acceleration, deceleration, micro-step, and motor current limit).

All the hardware and software are playing nicely and work very well together. Soon I'll be posting some images captured with this system. 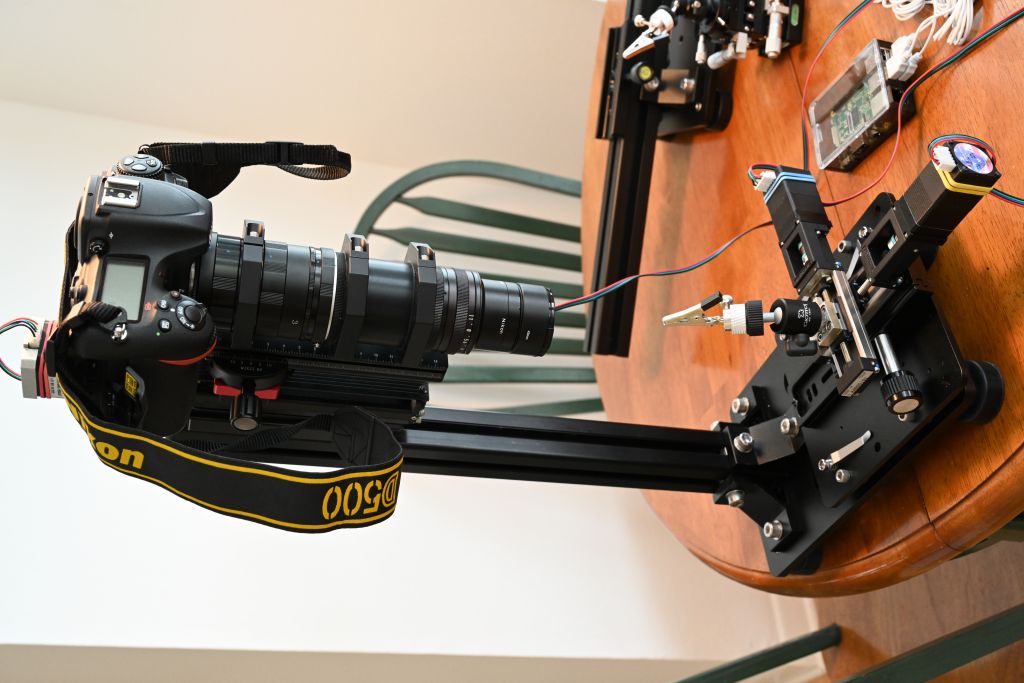 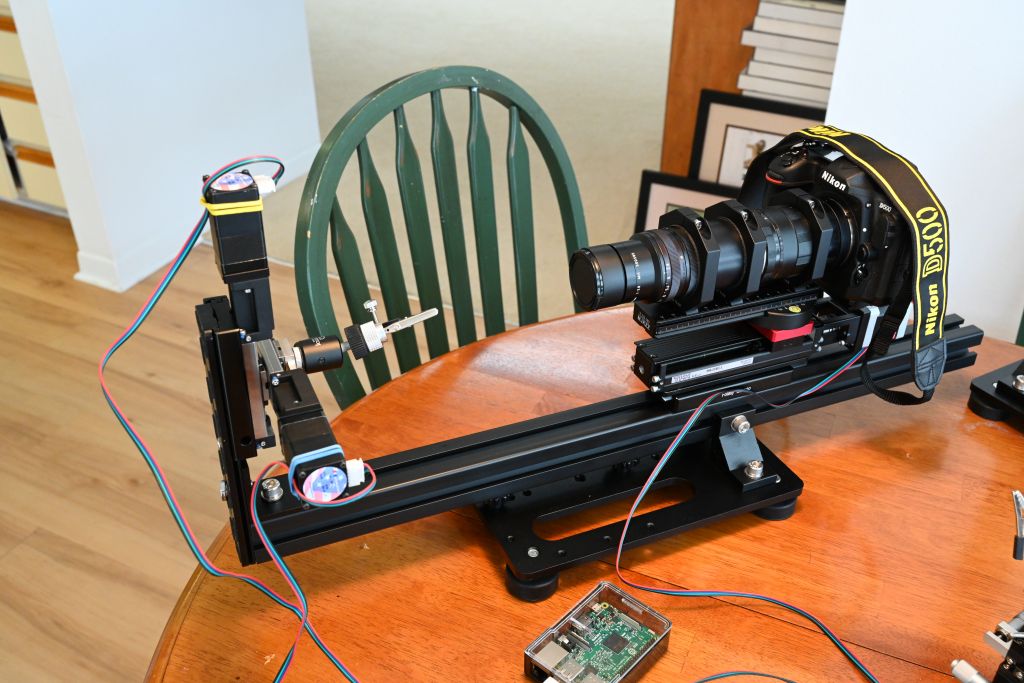 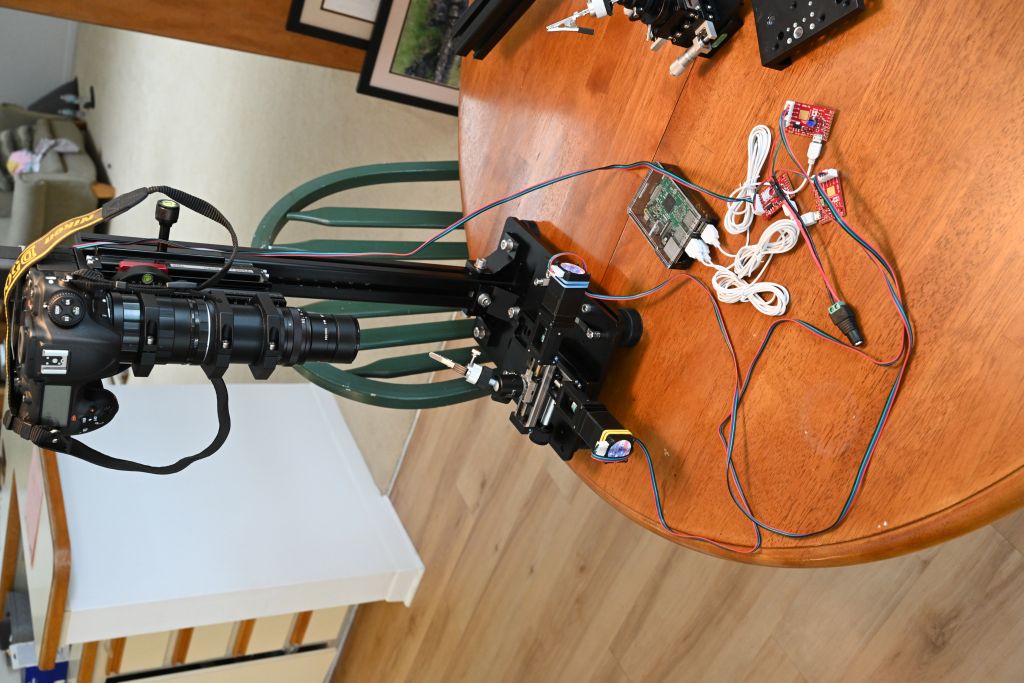 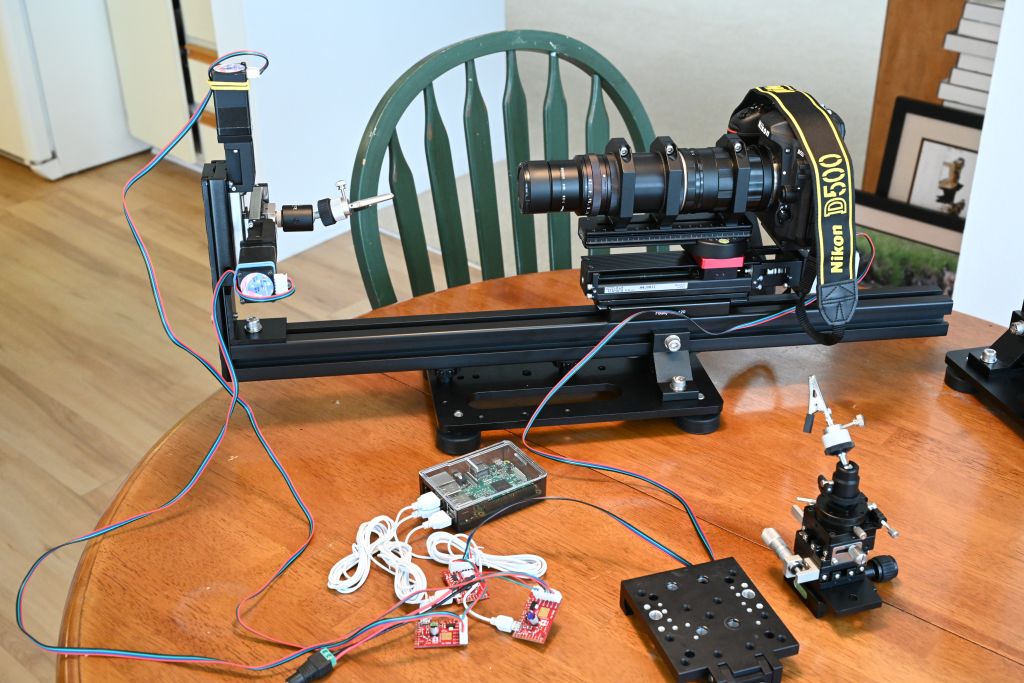 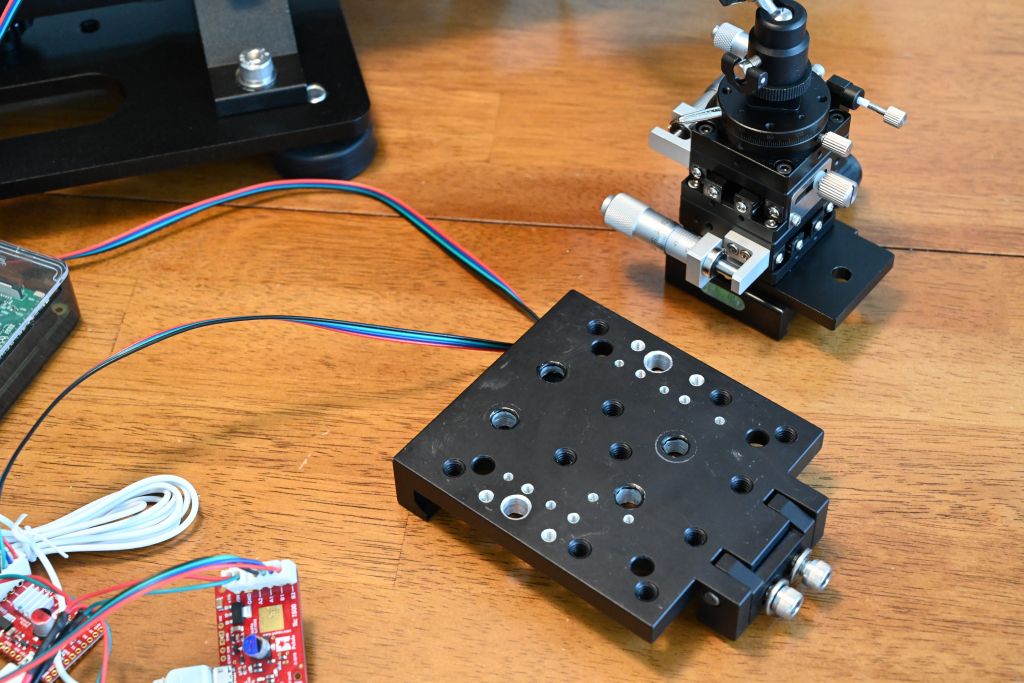 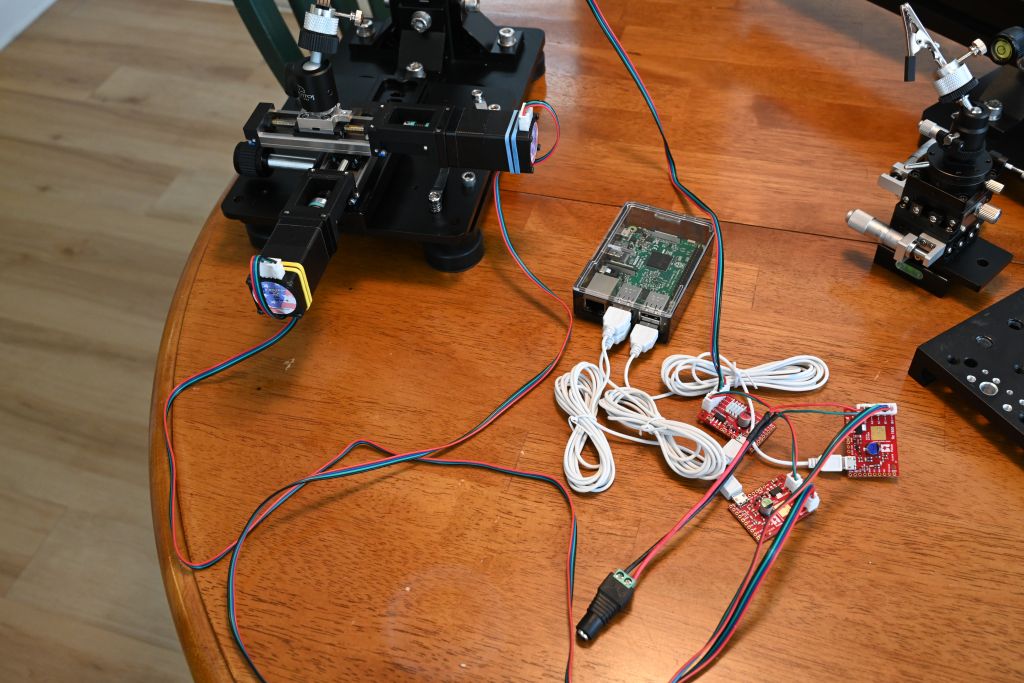 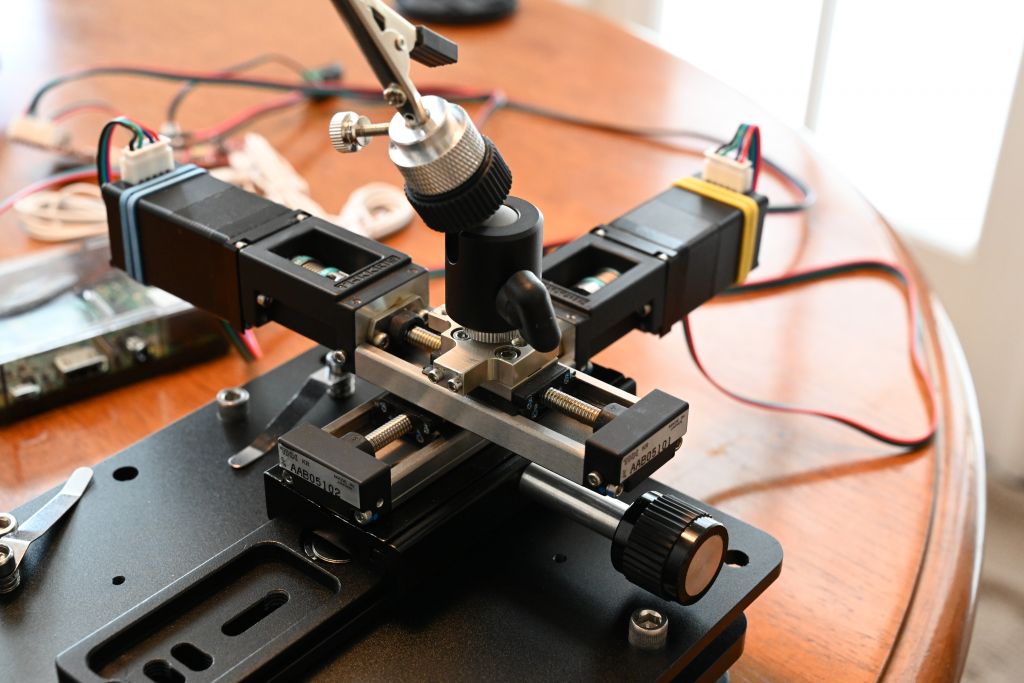 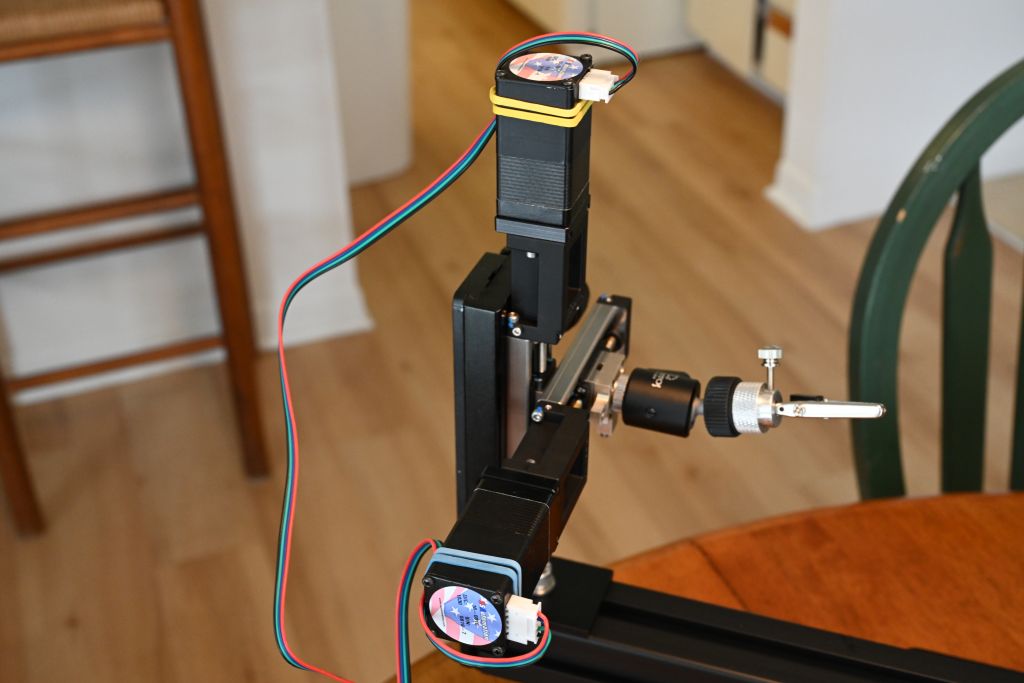 Research is like a treasure hunt, you don't know where to look or what you'll find!
~Mike
Top

Congrats ... looks like a nice thought out rig to me and a lot of fun making it.
Top

Smokedaddy wrote:Congrats ... looks like a nice thought out rig to me and a lot of fun making it.

Thanks, it's bits and pieces from all over...so somewhat of a hodgepodge of things

The real Precision setup is build around the Thor Labs 95mm optical precision material and base. It' more difficult to work with to develop the code and check for things, so I've opted to use the setup built around the WeMacro Vertical Stand. Once I get the code to a point of validation, I'll move over to the Precision setup.

Still have a Mitutoyo QV scope sitting in the garage under a tarp, I sold the QV 1x objective that it came with for $340 that covered the cost of the entire Scope. Everything on the scope is powered and it comes with 6 Nikon/Moritex fiber lights.

Over the weekend I was able to get the Raspberry Pi 3B and 3B+ working with a Remote Desktop on my Mac using VNC, this is not just a remote terminal but full Raspberry desktop just like you get with a monitor and keyboard + mouse hooked up. This allows the Stack and Stitch software, stepper controllers and Raspberry to operate without the need for a monitor, keyboard or mouse, so truly remote. Works beautifully and allows the Raspberry along with the stepper controllers to be placed anywhere with the setup and have the stacking session fully controlled on a remote computer via VNC. Note that this is not a Bluetooth connection but a local wide bandwidth WiFi 802.11 connection thru the router.

I couldn't get the Raspberry Pi 1.3W to operate properly though, I got the VNC working but was having trouble with the USB control of the stepper controllers, it's also much slower than the 3B or 3B+...so I'm just going to shelve the 1.3W for now.

Best,
Research is like a treasure hunt, you don't know where to look or what you'll find!
~Mike
Top
Post Reply Previous topicNext topic
5 posts • Page 1 of 1