Last winter I removed a large mud dauber nest from one of our outside window frames (Richland, WA, 400 ft elevation). I kept the nest in a jar in a shed outside, expecting that at some point I would get either some long skinny black wasps or some brilliant blue cuckoo wasps (nest parasites).

Instead, today I got these things that I don't recognize. Two wasps emerged, apparently identical, only one shown here.

Does anybody know what it is? 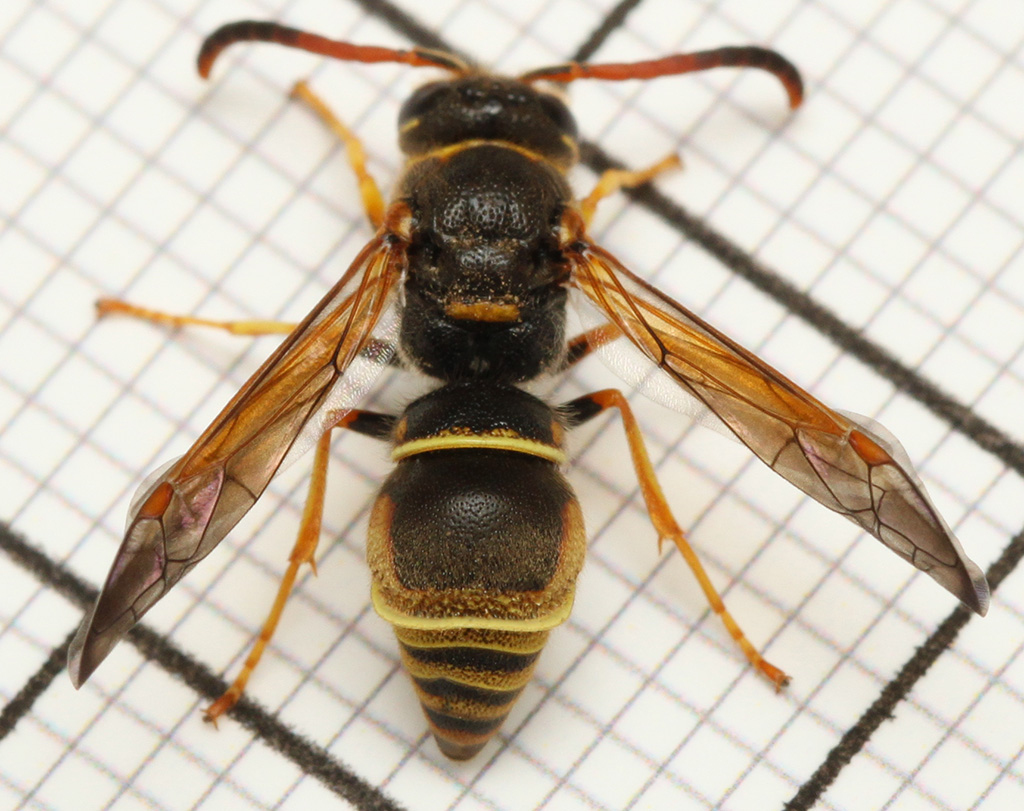 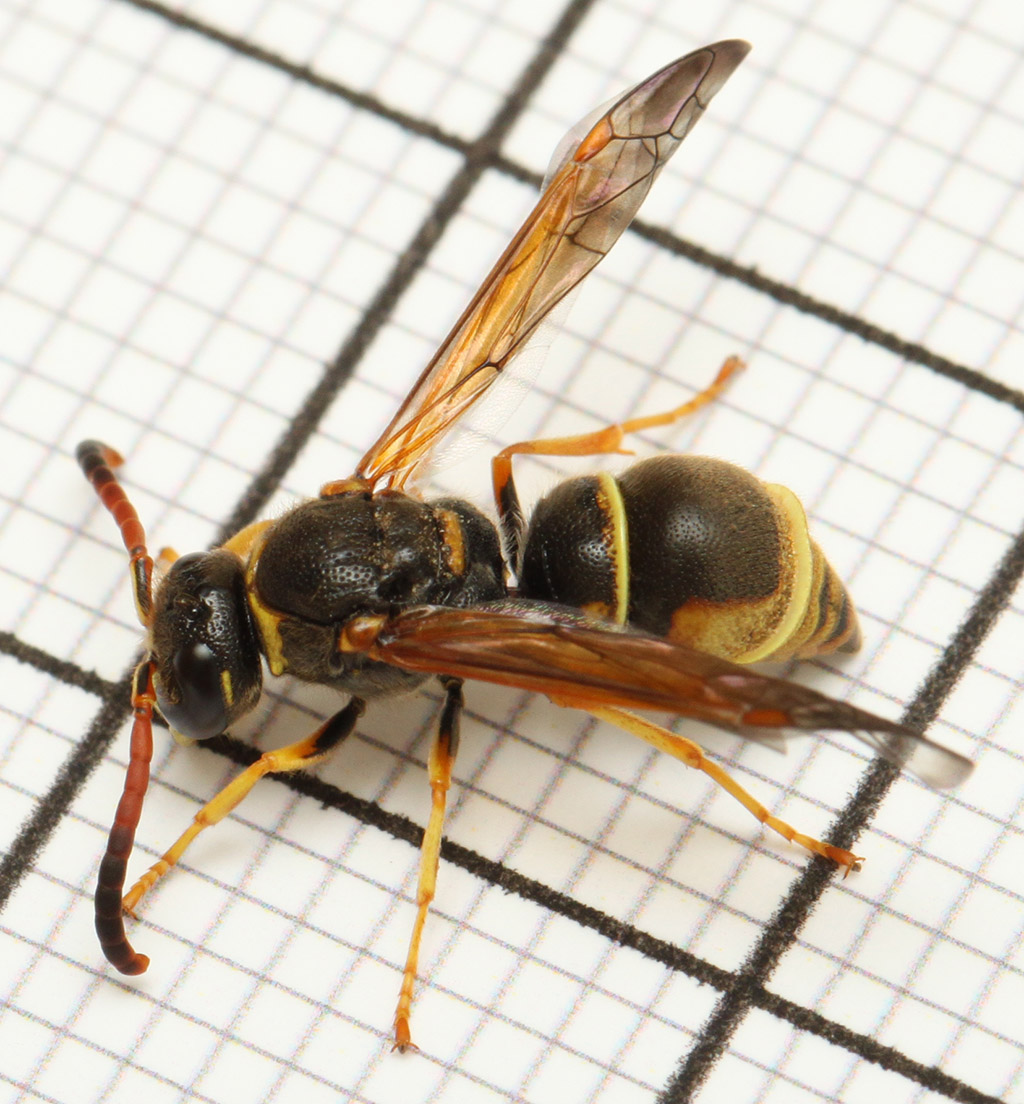 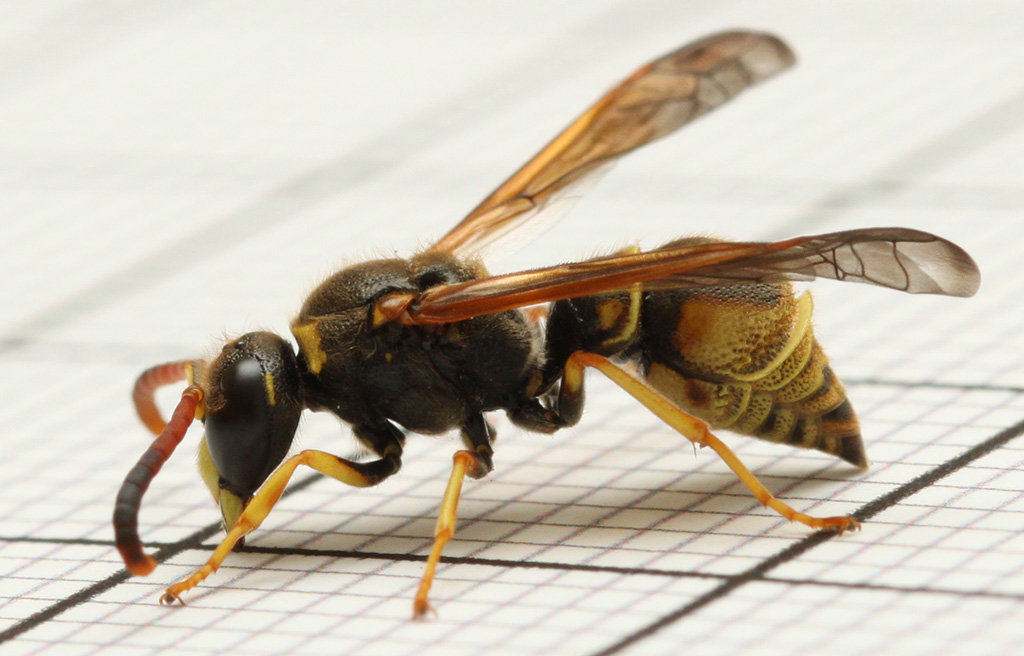 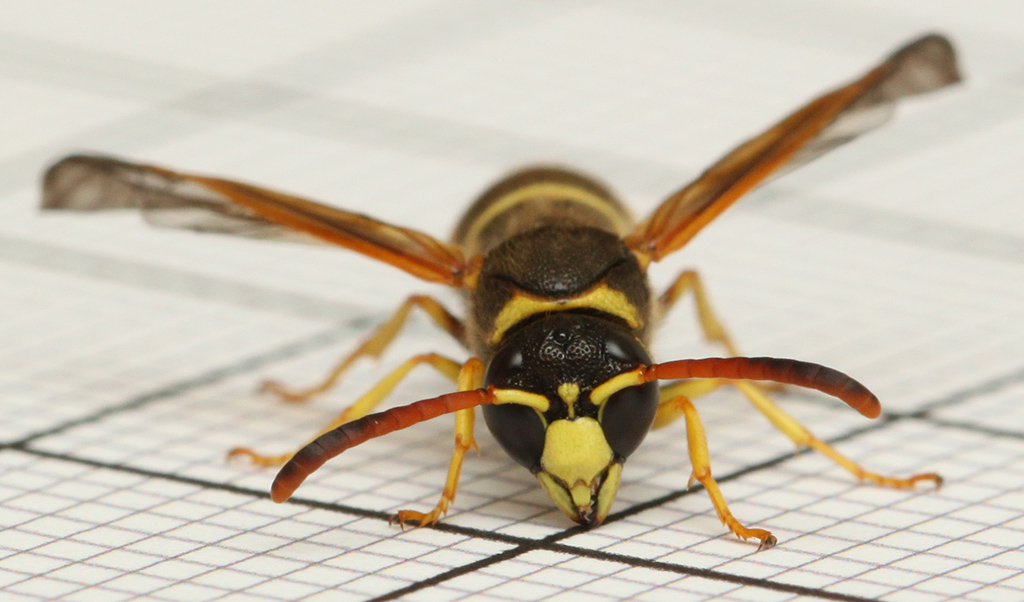 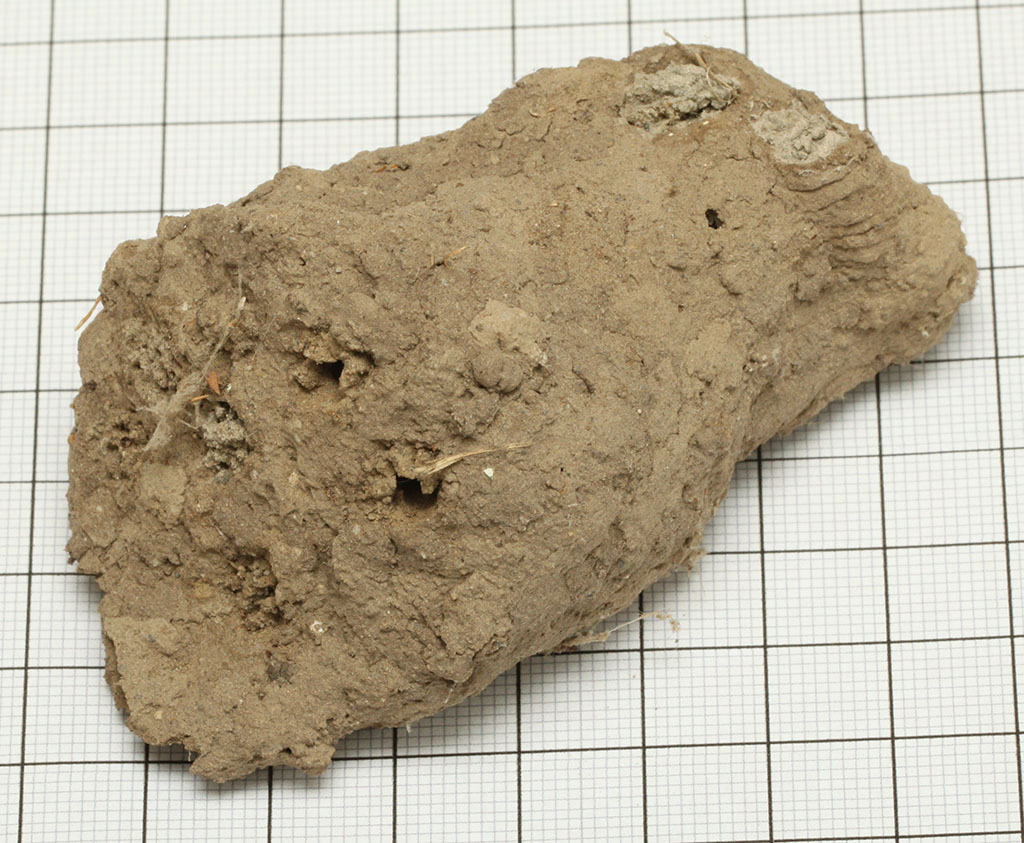 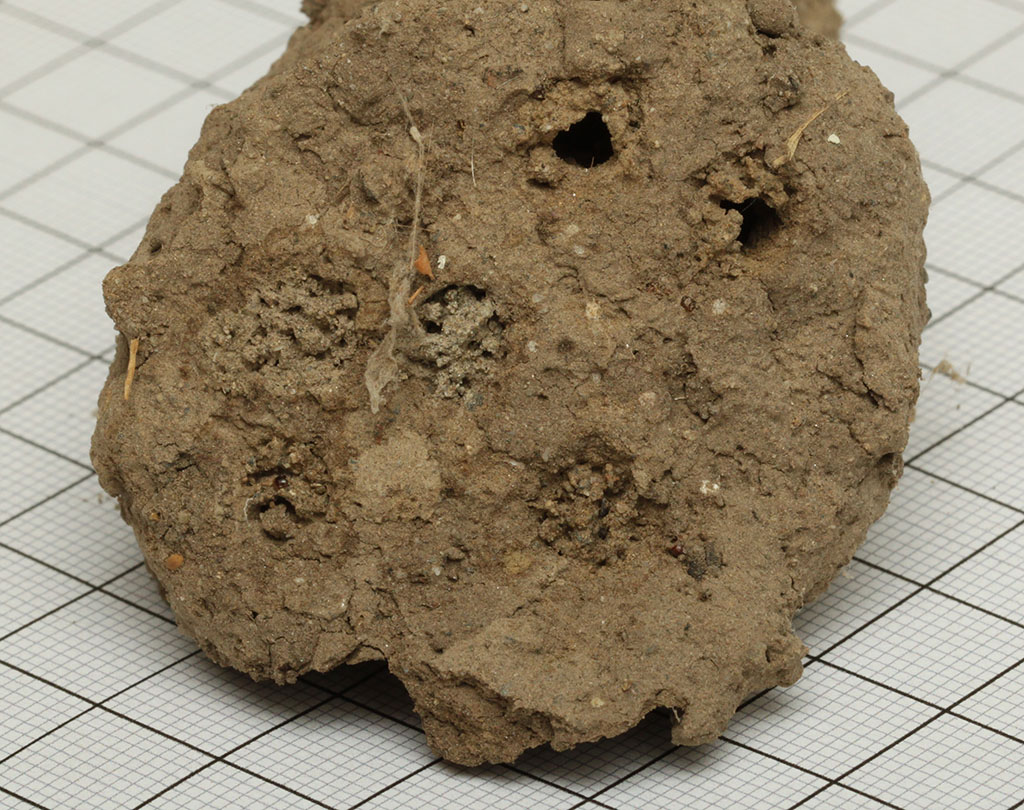 Canon T1i camera with Canon 100 mm macro lens, Canon 580 EX II flash bounced off the ceiling. Small squares are 1mm, ink jet printer. The wasp was chilled in a refrigerator then photographed while still torpid. But they're pretty calm anyway. I haven't seen one try to fly yet. They just walk, and not very fast at that.

Don't know what the species is, but from my observations of the red spots on the wings, it is a male.

Looks like a Brachygastra mellifica (Mexican honey wasp) to me. Need to ask a specialist to be sure though !!
Always looking at the bright side of life,
Kr, Rudi
Top

Rudi wrote:Looks like a Brachygastra mellifica (Mexican honey wasp) to me.

There's some superficial similarity in appearance, but the habit and location are all wrong. These are clearly either mud daubers themselves, or some sort of parasite/predator of mud daubers, and the location is in the northern tier of U.S. states, only about 200 miles from Canada. In contrast Brachygastra mellifica are social paper wasps found much farther south.

You can ask an ID request on 'bugguide.net'.
Always looking at the bright side of life,
Kr, Rudi
Top

Rik, I've been going through images on the internet trying to find a match for you, and though I haven't found a perfect match, I did learn that some wasps of the genera Pseudabispa and Epiodynerus (at least) look roughly similar (though these are Australian) and nest in abandoned mud dauber nests:

So far BugGuide has moved it from ID Request into subfamily Eumeninae, no finer ID yet.

Clicking through 281 pages of images, I found a couple of close visual matches that were labeled "Perhaps close to Ancistrocerus tuberculocephalus?"

To my eye most of the images of that species are not a good match, but one image of the earlier specimen (from 5100 ft elevation in California) has been confirmed as Ancistrocerus tuberculocephalus. The fellow who did that ID, Richard Vernier, seems no longer active on BugGuide (last comment Feb 2015).

http://bugeric.blogspot.com/2011/07/was ... cerus.html has some discussion that seems to match the circumstances well: "Ancistrocerus tuberculocephalus is known to use the abandoned mud nests of the Black and Yellow Mud Dauber, Sceliphron caementarium, for its own nests. "

Three more individuals emerged today. These are more active, and at least a couple of them give the impression of having longer more flexible abdomens, or at least are inclined to move that way.

Here are a couple of shots of the same individual, showing the abdomen in different poses. 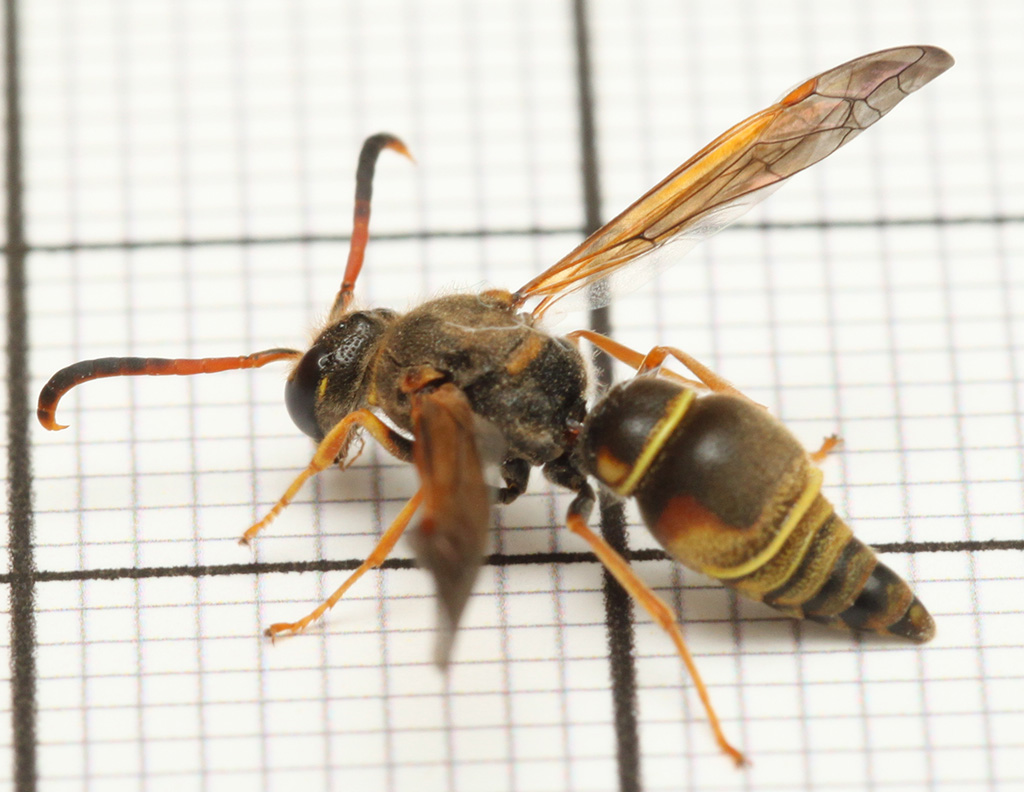 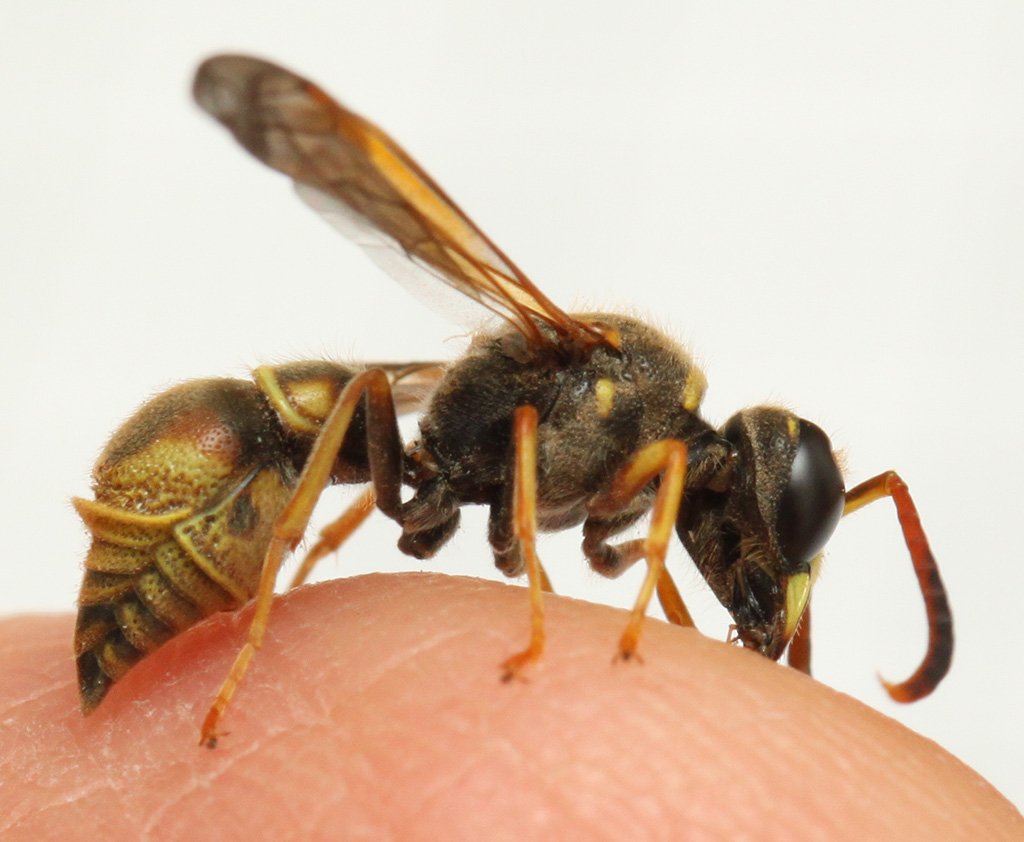 Yes, that last one is shot on a finger. They're still not very inclined to fly.

Two individuals have now emerged that are much larger than the others. I assume these are females, although there is nothing about the anatomy that screams gender to me. 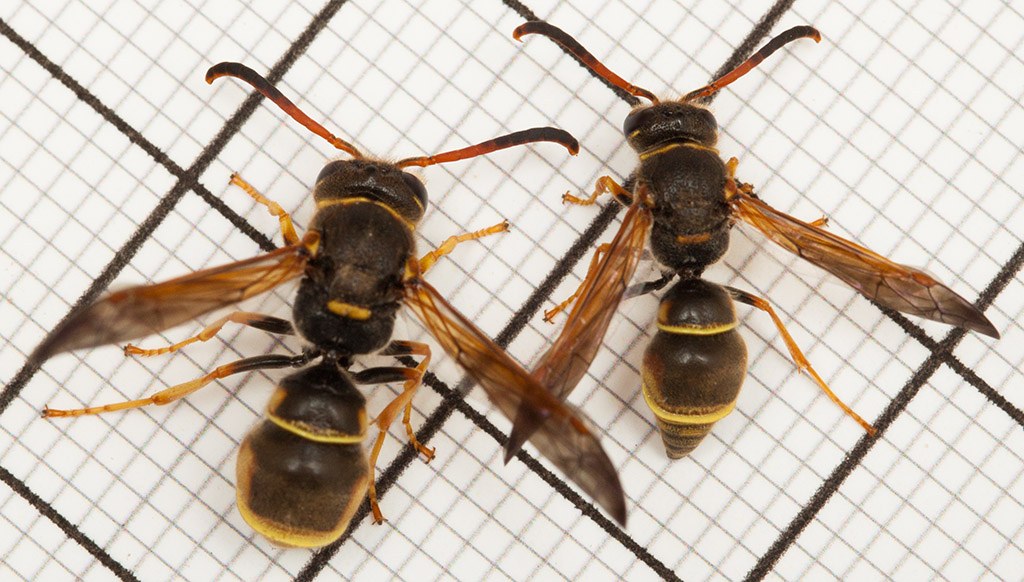 And some shots of the large one. 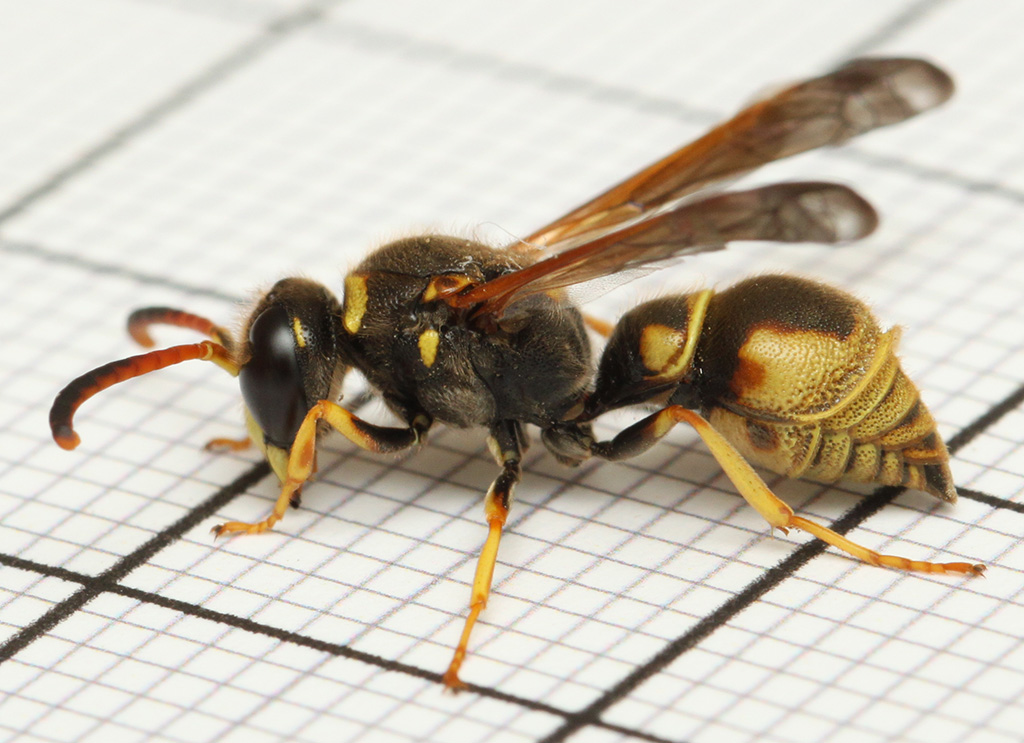 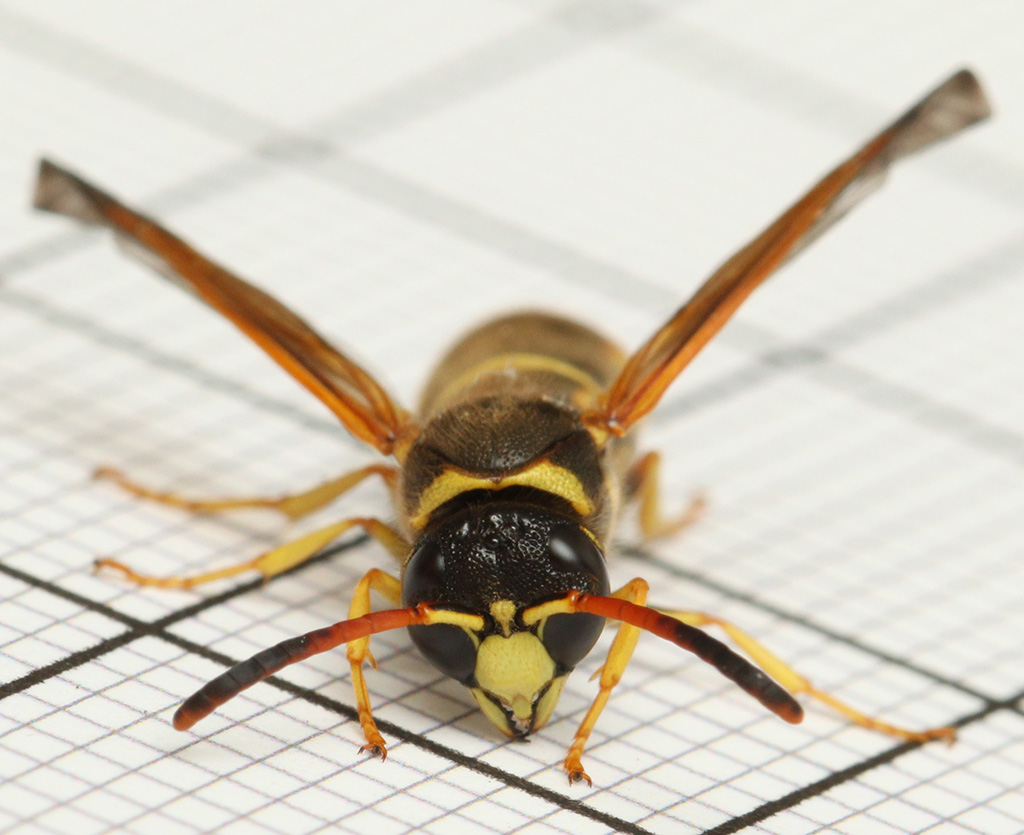 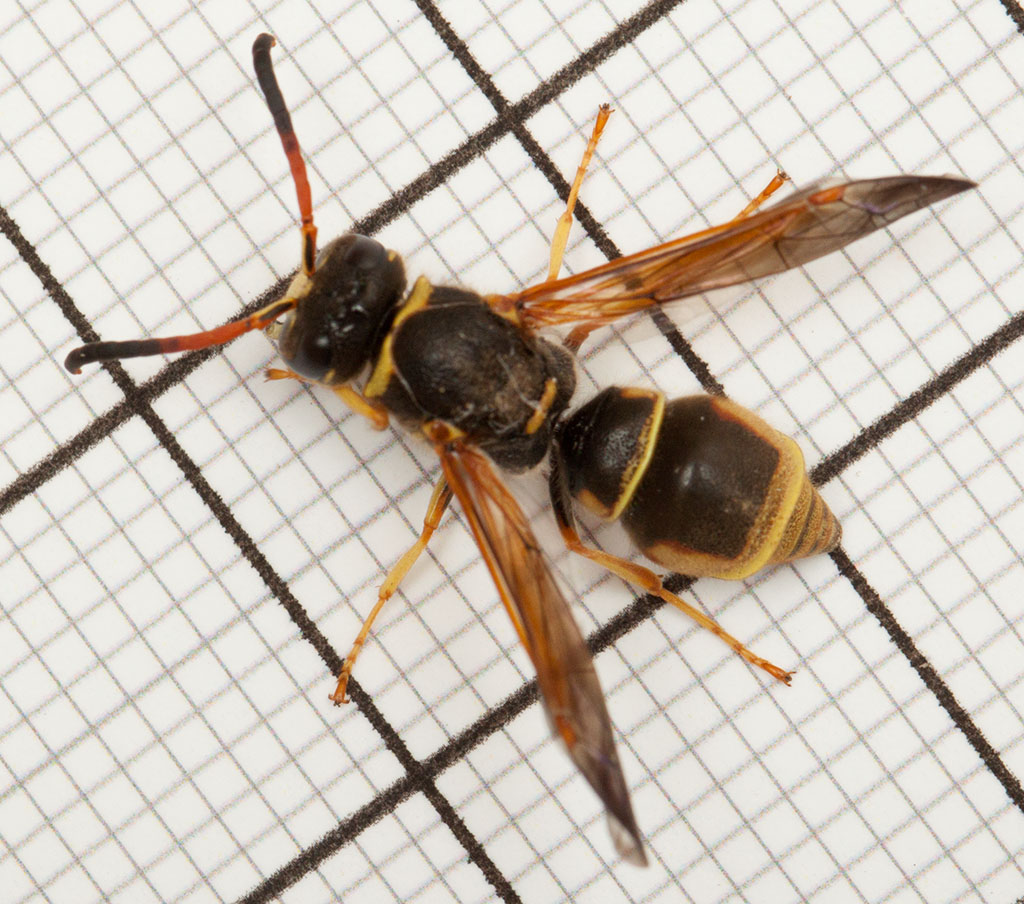