Hi, this lens has been recently announced and macro photographer Nicky Bay it's trying it. You can find more information here: https://www.facebook.com/media/set/?set ... 440&type=3

The specs looks interesting, the mayor downside to field macro I see its that the lens has manual aperture, but as Nicky point out, this lens being a 25 mm has relatively great DOF, so in f5,6 is usable at 5X and you don't lose much light.
Bernardo
https://www.flickr.com/photos/bernardosegura
Top

F/5.6 at 5x is an effective aperture of 34. That's diffraction territory for me...better to use a good 5x or pushed-down 7.5x objective. Though for field work with no stacking option available, it might be good.
Lou Jost
www.ecomingafoundation.wordpress.com
www.loujost.com
Top

The bit about more DOF because of short focal length is not correct. It's a common misunderstanding, probably based on experience with non-macro photography where short focal length usually goes along with low magnification = wide field of view.

What actually happens is that DOF tracks with magnification and effective f-number, and is independent of focal length.

If your composition includes recognizable background, then at same magnification for the subject you'll get more background, and smaller, with a shorter focal length. That may also present an impression of greater DOF, but it only applies to the OOF background stuff.

same perfomance for a fraction of the price ...

reversed 35mm componon on cheap bellows cut in half... (otherwise the bellows are longer than the working distance) 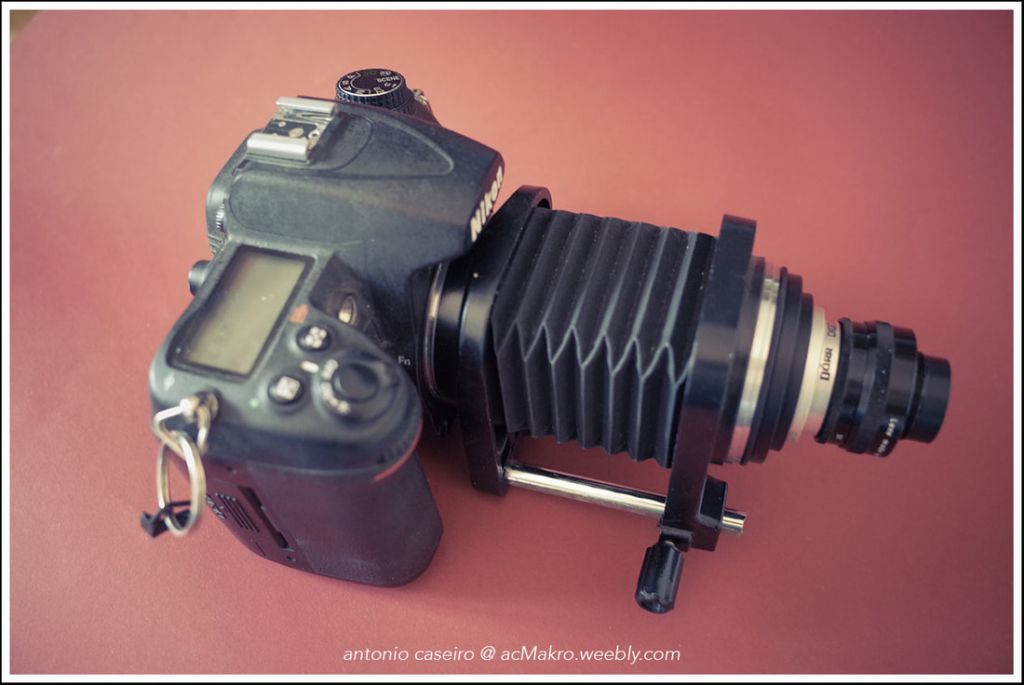 I've also been sent a copy of the Laowa 25mm macro and hope to have a review in a few weeks (prob. end Feb)

My own macro work tends to be of small electronic components for catalogues/brochures, where I use the MP-E65 (or the odd home-brew lens setup)

Here's the lens compared to the MP-E65 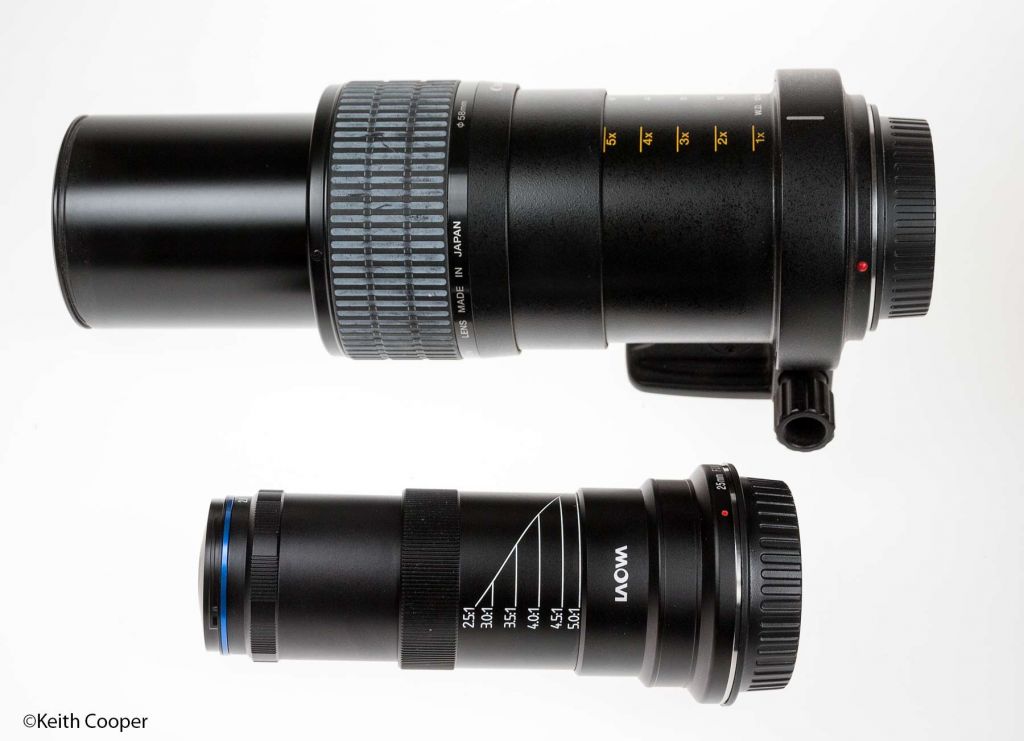 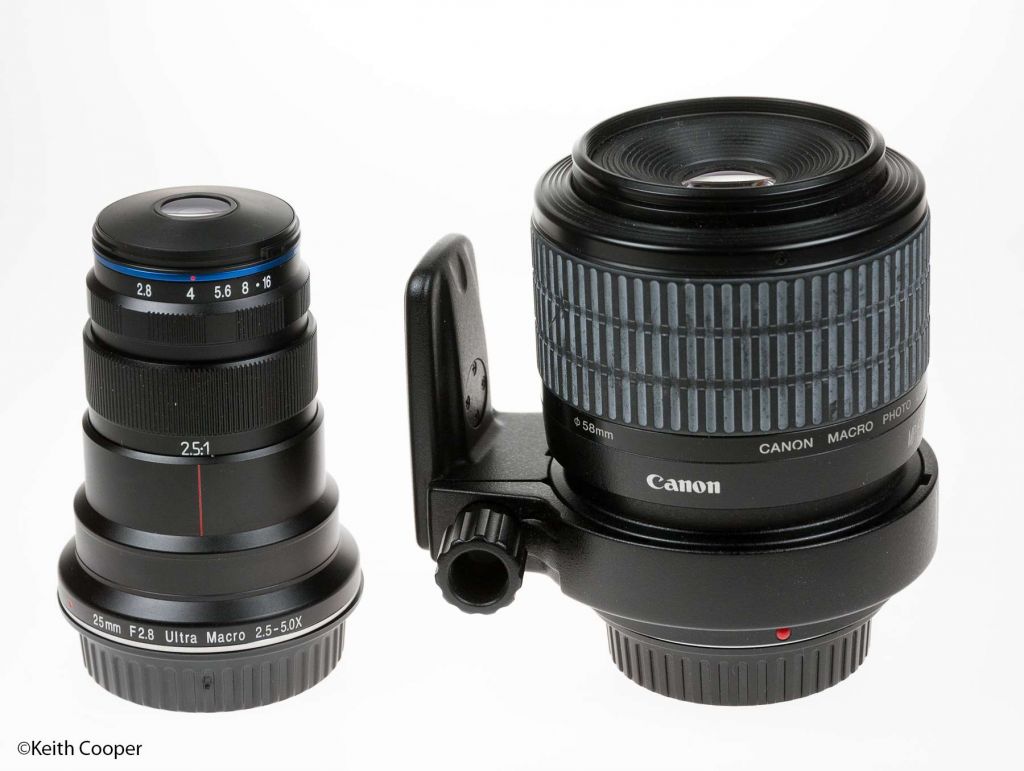 If anyone has any specific queries, please let me know

Welcome to the forum, Keith

The only reference I find, 6800-7500 Yuan, around £800, seems high for a manual aperture lens. It's a couple of layers deep in translations.

Thanks - I've no other info about the commercial aspects of the lens I'm afraid.

They are going to have a presence at the UK 'Photography Show' in Birmingham (Focus as was) in March.

I'm also curious in looking at their long relay lens too - not for any specific reason, just curiosity ;-)
bye for now
Keith Cooper
Top

If IQ proves to be excellent fully open at 5x or stopped down 1 stop at 2.5x, this lens might be worth a premium price even if fully manual, maybe up to 300-400 GBP (800 GBP is probably too high for sales in significant volumes).

The diaphragm seems to have 9 blades, which suggests the designers decided to avoid the pitfall of the 3-bladed diaphragm of the Mitakon 20 mm f/2, which goes only from 4x to 4.5x (it was possibly intended to reach 5x, but the range may have been cut short because of unexpected internal flare).

Together with the Laowa 60 mm f/2.8 2x macro (or one of its Oshiro/no-name virtual clones), this 2.5x-5x lens could in principle replace the Canon MPE and an ordinary macro lens on APS-C or Micro 4/3. It would be interesting to know how it performs on full frame. I would not be surprised if it does cover full-frame.

I cannot say for sure, but it seems likely that the magnification helicoid moves one or more internal optical groups independently of the front group, causing the focal length to significantly shorten toward higher magnifications. The excursion of the helicoid seems too short to just move all the elements in a single block without changing the focal length (unless the FL is very short, possibly less than 20 mm).
--ES
Top 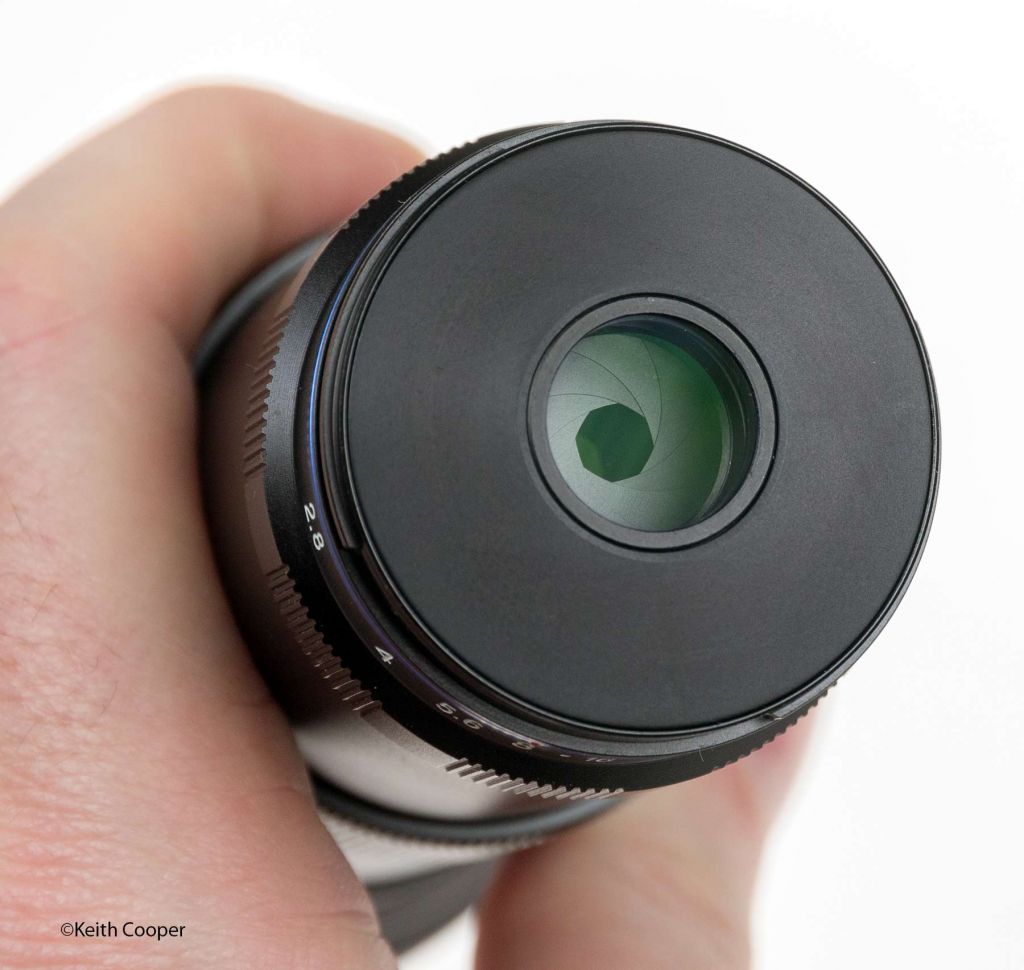 It does cover full frame - I'll post some examples once I get the chance to set everything up for testing.

Here are the current specs I have for it: 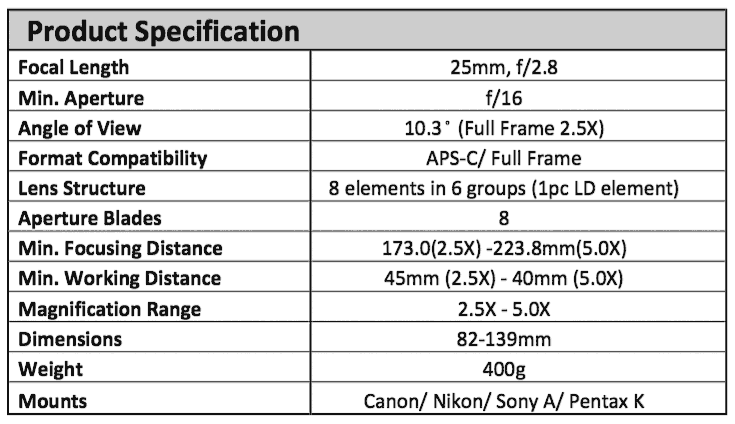 ChrisR wrote:The only reference I find, 6800-7500 Yuan, around £800, seems high for a manual aperture lens. It's a couple of layers deep in translations.

I know the price but I'm not allowed to say it as of now. Let's just put it this way: If one expects to pay 5000, they will be very surprised in a good way when they see the actual retail price.


As with DOF, Rik is right. If one takes a 20mm at f/2 and crops it into a 200mm, with distance to the subject being the same, the DOF will be the same as a 200mm f/2 lens. DOF is independent of focal length. The difference here is obviously a 20mm cropped into 200mm is not usable, hence why 200mm f/2 gets sold.

The advantage of the Laowa is that with the same distance, it yields greater DOF since the lens is fundamentally wider than the 65mm MP-E. I was told that the lens will come out in March, hopefully my copy comes and I will do a comparison. Mitutoyo 10x reduced to 5x VS the Laowa at 5x. A comparison with MPE would be nice too, and I know a person working on one already!

Sorry, but someplace in here you have surely typed something you did not intend.

At same distance to subject, the proper equivalence is between 20 mm f/2 and 200 mm f/20, each of those having a 10 mm entrance pupil. Then when you crop and enlarge the 20 mm image to be the same size as the 200 mm image, you get the same DOF in both of them.


The advantage of the Laowa is that with the same distance, it yields greater DOF since the lens is fundamentally wider than the 65mm MP-E.

I'm a little confused about what's being compared to what.

It sounds like you're saying that at the same working distance, you'll get more DOF with the Laowa because you'll also get lower magnification.

I agree that's probably true, but I have to wonder why I would care.

Couldn't I equally well set the MP-E 65 to the same lower magnification, and get the same DOF with an even greater working distance?

To me, the advantage of the Laowa will be if it gives a favorable tradeoff of cost versus image quality, or if it turns out that the Laowa is significantly simpler to illuminate around because of its smaller diameter.

The text on the right basically says:
1. Try not to touch the front element, blow dust away with an appropriate blower. The lens cannot take filters, so keep the cap on when not in use.
2. When cleaning the front element, start from the middle and spiral towards the edges. It's talking about using lens cloths (NO. Don't use it) or cleaning liquids.
3. Erratic temperature change will cause condensation, take appropriate measures to deal with such environments.
Blog
My Flickr
YouTube
Top

Sorry, but someplace in here you have surely typed something you did not intend.

I was confused. Once again I got the distance confused, thanks for the correction!
I was referring to something like this:
https://cdn.fstoppers.com/media/2016/10 ... fps_61.gif

I think the confusion here is optical zoom. I don't know much about these types of cameras, but I do know that my 200/4 macro lens is actually f/5.6 at 1:1, this is called equivalent aperture I believe.

So yeah, you're right. A 20mm at f/2 cropped to 200mm would be equivalent to a 200mm lens at f/20. The gif above comes from an fstoppers article "debunking lens compression".

As for the DOF advantage, I personally don't care either. I shoot most of my macro lenses wide open for best resolution, since a lens is technically most resolving at its larger aperture, obviously spherical aberration will bring less sharpness, but most macro lenses aren't fast anyway. I use focus stacking so DOF isn't a concern for me and many other users on the forumn

It does seem that a couple of users I know do care, but they don't own an MPE anyway, so I'm very sceptical of their judgement when they say the "greater DOF is an advantage". It could be, but who knows.

In my opinion, the advantage of the Laowa is such that it can be directly mounted onto Nikon and Pentax bodies without fiddling with adapters. I have came up with a laborious way to mount the MPE into my Nikon using 2 cheap Chinese extension tube mounts, and I have the change the aperture on the lens by using another Canon camera, holding down the DOF preview button and immediately taking the lens off, that's an annoyance. The F-mount version will allow full metering capabilities, since it's essentially an AI-s lens.
(Update: No aperture coupling on the Nikon version unfortunately)


Optically, I am very optimistic. I personally think it will be on-par, or maybe even surpass the MPE. Laowa's 60mm macro lens is sharper at 1:1 and less sharp at 2:1 compared to the MPE.

I made a flickr group, will be dumping some images in.
https://flic.kr/g/AAwSx

It’s certainly an interesting lens. The fact they're putting 8 elements into it indicates that they're serious.
But if someone has an MPE-65, I don't see many selling it to buy this one. The automatic diaphragm makes such a difference.

I wonder if that's a Nikon macro lens - if so, some report an effective aperture to the body, which can be misleading if you didn't know.
An f/4 lens, used at 1:1, has an effective aperture two stops smaller, ie f/8. The only way that might not be true is if the lens mechanically alters its aperture as you focus, which I've never seen.
Effective Aperture = Marked Aperture multiplied by M+1, where M= magnification.
So eg f/2.8 at 5:1 becomes Eff/16.8. There is a factor which has to go in for the PMR, which usually makes you worse off than you thought. Rik's post about Pupillary Magnification Ratio, & discussion, is HERE .


For reasonable Effective Aperture, at higher M than 1:1, good lenses DO have wide apertures. The sharpest ones live on microscopes. Their FLs are 25-60mm as seems normal, but their apertures, which you have to work back from "NA", get towards f/1.0 at 5x (NA 0.4), or wider at higher M.

Granted a 50mm lens would have less angle of view, but you have so little in focus, you just don't see the difference; the perspective is so little changed. Some of the best lenses for high M macro are telecentric, which means they have the perspective of a lens with infinite FL. Again, you don't notice.
If you're stacking, then the program which does that can/will realign images so details line up, changing everything anyway.

The MPE shortens its FL as it focuses closer. The Laowa apparently does something too; it must, to give the working distance. Eventually someone will find out exactly what it does!


So far on these (small) points then, nothing's significantly advantageous. Also the claimed DOF difference is just not there.
But if the working distance is much the same as the MPE-65 at 5:1 that is a significant advantage, because of the smaller front end which makes lighting easier.
Chris R
Top
Post Reply Previous topicNext topic
79 posts