After a short discussion in one of Charles' threads, about keeping specimens alive for extended periods, I decided to get serious and start a specimen tank.

I went to Walmart here in town and was looking for something in the range of a half gallon to a gallon with a large footprint, for a decent surface area. I had something in mind like a covered Pyrex breadloaf pan, but found a 2 or 3 gallon carboy like jar, with a top, instead, for under $10. I am hoping, with some live plants, a few snails and no fish, it will keep itself fresh and the inhabitants alive, with very little effort on my part. I paid $3.24 for a bag of real gravel, and $5.40 for 2 large snails and some live plants, [I really wanted just the plants, but had to take the snails to get them].

Years ago, I kept aquarium fish as a hobby, and did pretty good. There were people then who liked to try to keep fish in tanks with no aeration, lighting or heat accessories. I never actually tried it myself, but knew it was possible if you got the balance just right. This is day one, but I think it will work.

I washed the gravel and added it to the empty jar, then added a couple gallons of well water, [chemical free]. I put the snails and plants, in their little travel cups, in the water to equalize temps, then let them go into the jar and planted the plants in the gravel. I also had three jars of old river water, dead veggie matter and some silt. One jar was totally dead and anaerobic, with bubbles in sludge at the bottom. It really stank too. That one I just poured out. The other two were almost dead, but had some Gammarus Shrimps and some other little bugs swimming in it, and as it turned out, a living river snail. These, I just poured into the aquarium jar as a starter culture. I see the snail in there, but the shrimps must be hiding.

I am curious to see what you are using, so feel free to add your pics and information. 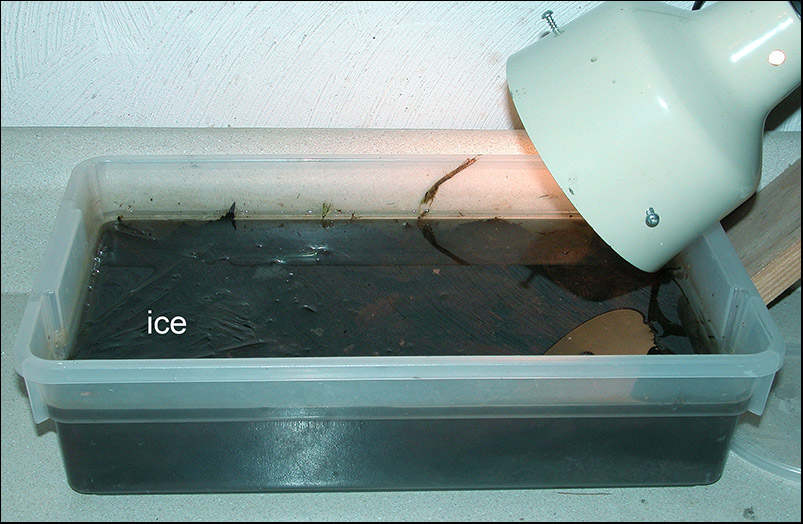 NU10097
NU.
student of entomology
Quote – Holmes on ‘Entomology’
” I suppose you are an entomologist ? “
” Not quite so ambitious as that, sir. I should like to put my eyes on the individual entitled to that name.
No man can be truly called an entomologist,
sir; the subject is too vast for any single human intelligence to grasp.”
Oliver Wendell Holmes, Sr
The Poet at the Breakfast Table.

You did say it was in your unheated garage. Didn't know it had ice in it though. But that must add another dimension to what lives in there. I did not think of food though. I think you said you use flake food?
Top

you have to create food chains.

Of course those food chains feed amoebae and rotifer as well. The water must become cloudy! The fertilizer must contain PO4 and NO3 - use not the fertilizer for aquatic plants.

I normally use glasses that hold 200 ml. I use water from a pond, water that was in a flower vase for a couple of days, non sparkling mineral water. Depending on what I want to do, I add some mud from a pond, a couple of rotten leafs, cyst granule, mud from a used fish tank filter, peat etc. I use a rice corn or a drop of coffee cream to add organic material for bacteria to grow.

It is a good idea to try several things in parallel and compare the differences.

And remember, this is not a goldfish bowl. You might need to hide it from your wife, mine shows her protest to the rotten stinky stuff in the windows by "accidently" throwing it way.

Eckhard, thanks for the information. I was aware of the need for a food chain. I had some idea of what it needed, and hoped it would balance itself out over time. I did add two 'stinky' jars of specimens that were about to turn, and have just gotten back from the store with some flake fish food and some algae pellets, all the smallest sizes. LOL This should feed the snails, then rot and feed the small guys in there.

While this water does not stink and there is no one here but me to complain if it does, it is a little foggy still. My water here comes from a well, through iron and plastic pipes, no copper. It is clean, but not loaded with chlorine or other chemicals.

I already have Vorticella and Stentors, I presume from the 2 jars of water I poured in there. There are several dead leaves and some other dead vegitation that I dipped out from the river and was in those jars, so that's probably where they came from. I can see some small white water bugs swimming around too, much smaller than the Gammarus Shrimp. This is the stage I am hoping to keep it at.

I am hoping those algae pellets will still have some live cells in them. If nothing else, they will feed the microbes. I bought those two snails cause they had some water weeds in the cup. I picked the dirtiest ones and even added the dirty water from the cups. I know from keeping fish aquariums that the plant leaves are going to be covered with vorticella and rotifers, and maybe already are. At this point, these are what interest me the most.

I think, even this early, I have the food chain in place that you set out. Now I want to keep it going this way.

This is an update to an old thread. December 10th, 2010, it's now March 19, 2013 and this aquarium is still going strong. I have not broken it down, although I came close to it a couple times thinking it was dead or beyond recovery from infestations of algae and bacteria. Both were brought under control by an 80% water change and air from an aquarium pump running nonstop for days on end.

At one point, the Hornwart plants were down to one 3 inch sprig, and now they have come back so strong I can not see from one side of the tank to the other. Last year, duckweed grew on the surface in a solid mat, and in the fall died back to a few plants. They are gone now.

The one thing that has survived through all the changes, is the bristle worms, the river snails and the cyclops and seed shrimp, all natives of the Mississippi River.

Here are 5 movies I made from fairly recently and going back to almost the beginning, that you may find interesting.

Another View Of My Microbe Aquarium http://youtu.be/iHr7ZDVKCFU

The Takeover of Pinkie the Worm - Dero digitata http://youtu.be/nLqiSfwij44
Top

Interesting, thank you for sharing.

Rogelio, I do find it interesting to watch the changes in my tank. I have it on my desk and can see it as I work on the computer. I spend a lot of time gazing into that tank.