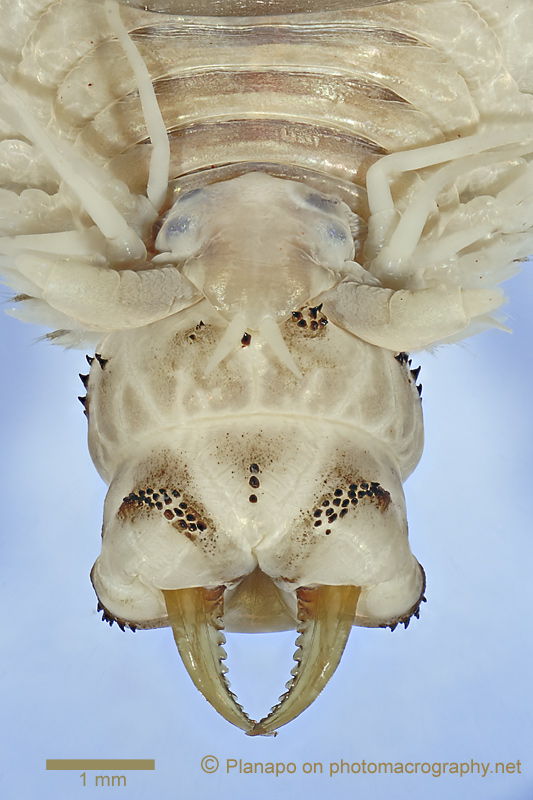 Shot at f/5.6 and about 2.8x . I will have to test, if the lens performs well at f/4 already.
ZS PMax did an excellent job, no further retouching was needed, just cloning out the usual "dust bunnies", for which I had to convert from 16 bit to 8 bit.

Does the photo look fine to you? I have a new computer now, but am still using my old Samsung SyncMaster 750p CRT monitor. I was happy to find the colour calibration software that had originally come with that monitor, and after I went through the process all photos I tested looked fine, so I did the editing with confidence. But now, viewing the photo uploaded and on my notebook, it looks different again!

So, does it look good to you? Or do you think there are issues with the display of the photo?

I thought some of you'd fancy a little "Who am I riddle", so no further information about the photographed creature yet, just that he has been "preserved" and hence gone a bit pale. But he's still a cool lookin' dude, isn't he?!

It looks good on my monitor, but it's hard to say if the colors are accurate. How does the resolution of this lens compare to the El Nikkor 50mm at this magnification?
Top

Looks good to me

Those 'pincers' remind me of some type of Debris-Carrying Larvae or a Lacewing Lava?

Looks like a wonderful picture to me, very clear, and quite a scary little beasty. I wish my yellow shots turned out like that

I think craig has the species pretty close too, I would guess at an ant lion, but that is near enough a lacewing isnt it?

Very nice low key picture but I think I would have it "jaws up" and lose some of the body ?
rgds, Andrew

Color and contrast look good here. Excellent lighting to show off the transparency of those pincers.

I'm not going to even hazard a guess about what this thing is. Every time something pops to mind, I look at the photo and decide "No, this part over here doesn't seem right for that."

Always trust a calibrated CRT monitor over a notebook!

Thanks guys for your comments and appreciation.

Good to hear that my old CRT monitor seems to do the job. I would not have liked to have to replace it and have to spend another considerable amount of dosh. The pleasure of hanging out with you guys comes for a price,

but well, I don't own many pairs of shoes

... but admittedly have collected too many lenses to shoot ...

... Ed - although I have only done quick and dirty comparisons of my copies of these lenses, I think I can confirm what Charlie says elsewhere. My 2.8/50 EL-Nikkor N delivers very good results already, my 2.8/50 Componon-S seems a tad better, and this lens seems again a tad better than the Componon-S. But I don't know if I personally could justify to shell out the lot of more money that is normally asked for it. In my case I was just lucky to purchase it for a very low price. Otherwise I think I'd be happy with the EL-Nikkor or Componon-S lenses too.

Andrew - I agree that other perspectives on that beastie can yield more dramatic photos, I hope I find time soon to shoot it again. But first of all I wanted to show more of its zoologically interesting traits.

Rik - These pincers or jaws are quite interesting, it looks as there could be hollow channels inside, and indeed I have read that some related species of the group this animal belongs to, can inject poison into their prey, but I am not sure if it's the case with this species here. And besides, when I had the animal first under the scope for some cleaning, I actually thought to myself: If Rik hasn't seen an animal like this before and thus doesn't recognize it instantly, he will say "what thing is this?". And yes, you (almost) did!

As to the ID, you seem to need more hints: No, its not a larva, it's a mature adult. And if they hadn't had their synchronized mating days, my catch wouldn't have been that easy.
I am a little surprised that nobody wondered why "the heck this predator has so many little teeth on the outside, what's their function?!". Well, maybe some wondered but just didn't say. However, I can assure you, he's not drilling for crude oil!

Most of the time this animal doesn't look as formidable as this, and hence when you have seen one before, he probably looked more innocent and you would not have thought what a fierce looking predator he can turn into, and therefore may not recognize him now. I had to "persuade" him to switch to "prey capture strike mode". If that doesn't help with further ID-guesses, you may have a clue about the quite astonishing "functional morphology" now?

Never looked at one this closely, but it reminds me of the sandworms (Nereis) I used years ago for bait when I went fishing. They had jaws like this, but normally you didn't see them. But they didn't hesitate to give you a good pinch when they saw the hook coming!

, you're spot-on, Charlie! Nereis it is!

Species should be N. pelagica. They normally lead a benthic life, but for reproduction the animals of this species synchronously change into a swimming form (first erroneously described even as another genus "Heteronereis") and then they scurry around in the water in large numbers, so that I had an easy catch with the net.

I understand you, I had my monitor adjusted too dark and most of my work was washed out. I think now is better but still is not properly calibrated.
I think you did a good job in preserving the detail, being a white subject it is a challenging experience.
Regards
http://www.flickriver.com/photos/seta666/
https://www.instagram.com/hd_macro_photography/
www.macrosmuymacros.com
Top

After ages I found some time to work with ZS again. As a result here is my first stereo. Zerene did a good job, I can see no flaws. Does anyone of you? 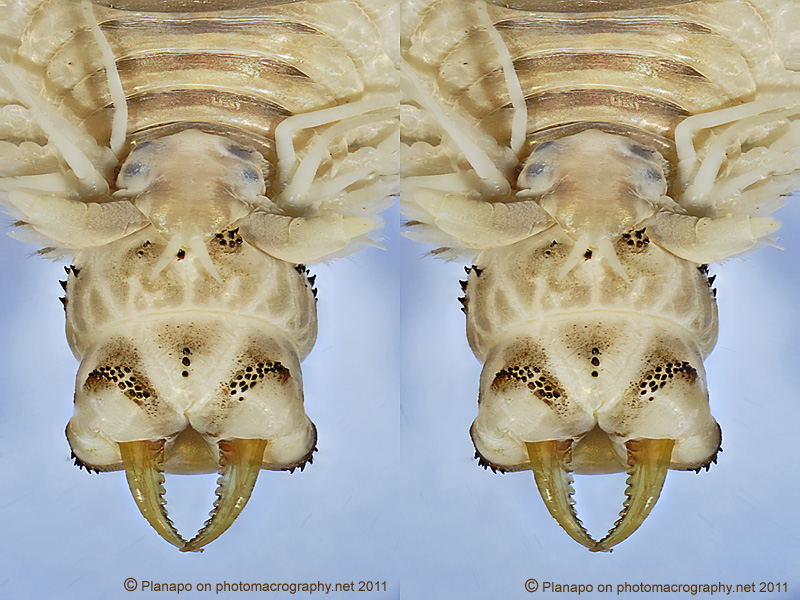 Maybe I should explain a bit more what is pictured:
The cap-like structure with the four darker spots (the eyes) is the head of the worm and the scary bits underneath (proboscis with jaws) are protruded. Normally, the jaws and proboscis are retracted back into the animal, so that the head is the foremost part of the worm.

A photo of a transparent Nereis that Wim had posted some time ago, shows the proboscis with the jaws rectracted and in the normal backward position, i. e. lying within the animal.

This looks great, Betty. There's a bit of "shimmer" between the two sides, probably due to using PMax rather than DMap, but it's no more than true stereo might have with a shiny subject like this. The stereo is nicely done, and very helpful to be sure about the anatomy.

Yeah, the anatomy/functional morphology of these worms is quite captivating. Looks weird when they extrude their proboscis inside out and at the end these jaws appear.

Not so sure what you mean with "shimmer". The animal's body surface has in nature a shimmer, what I mean is the iridescence, like nacre. But I think that's not what you mean with shimmer, ('cause it's to be seen in the original, non-stereo image already). I tried to keep this iridescence by not too much diffused lighting.
What I find interesting is that, in my perception, the short text with the copyright adds much to the depth of the stereo, as the text appears to be far deep in the background whereas the jaws seem to hover high above of it in the foreground.