Probably I could arm an audio detector based on the electrical trigger,

I'm sure you could(:)).
Microphone attached to the camera,to op-amp, controlled by your existing bits plus probably one more timer.
The little pic/Arduino boards have analog inputs of course.


but I'm a bit short of time

rjlittlefield wrote: But so far I have not been able to imagine any hardware reason why Live View should interact with flash triggering.

No idea about the camera electronics, but I can imagine this could be just a remain of the full mechanical shutters desing of the old film days that not detract the usual function of today cameras.
Pau
Top

Rik,
Just a thought. When in liveview mode (silent mode) does camera send synchronisation signal to flash hotshoe if flash is not connected? If it is you can use this signal to trigger flash (by connecting just syncro and ground contacts) while camera still thinks that no flash is connected thus preserving silent mode operation.
Top

Unfortunately apparently no sync signal is sent anywhere if the camera is in "silent mode". It is only when the camera senses a "Canon" flash that it automatically changes to an operational mode where the first mechanical shutter curtain is employed, and the flash sync signal is provided.
http://www.krebsmicro.com
Top

I see I missed some questions in this thread. Not quite sure how that happened, but it's not the first time and it won't be the last. Anyway...

SONYNUT, nope, nothing auto, all manual.

Dennis, I agree with Charles. I have another interface box (made long ago for a different task) that watches the hotshoe. It doesn't see anything happening there.

ChrisR wrote:Do I remember correctly that there's some sort of light on the back of the camera when the shutter opens?

I see no light on this camera, not until the exposure is finished and the image is being written to SD card (if one is installed).

My observation was wrong. In fact the light does come on at start of exposure if an SD card is installed and the image will be written to it. It does not come on (ever) if the SD card is installed but the image is not being written to it. I had Canon EOS Utility set to download images but not also save them to the SD card, so the light was never coming on in that case. The case where the light was coming on, I have no idea how I messed up.

Many thanks to Charles Krebs for his PM prompting me to take another look at this issue.

Triggering from the light on the back of the camera eliminates most of the variation in trigger-to-shutter delay. I set up to run the camera from a StackShot via the camera's wired remote socket, pulling RAW+JPEG into a laptop over USB via Canon EOS Utility and also saving them to the in-camera SD card, with the camera watching an oscilloscope whose scan was triggered by light-on. Camera set on Live View, 1/25 second exposure. In 100 frames, the delay from light-on to shutter open varied only from around 12 to 28 milliseconds at the location of the trace. A flash triggered at 40 ms after the camera light came on would have been handily captured in every frame at 1/25 second exposure. Shutter-open times of 1/50 second and faster would be unreliable because of the variation in delay (16 ms here, probably more in a longer test). 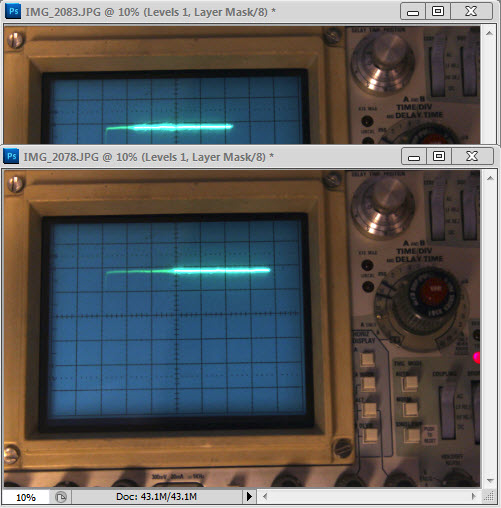 Many thanks to ChrisR for pointing me down the right path, and to Charles Krebs for putting me back onto it after I strayed.

Looks promising.
For those who've never used an oscilloscope - the dim part of the scope trace is the afterglow "persistence" of the phosphor in the tube, from where the travelling light spot was before the shutter opened. Neat!

For holding the light sensor (photodiode?) I have some adhesive magnetic tape, less than a millimeter thick. (http://www.maplin.co.uk) A disc on the camera with a hole in the middle would perhaps do the job, holding a similar magnet surrounding the diode. It probably wouldn't impede the camera for other uses and removes the need for yet another holding device?

The little noise is not for putting the light on, then, so there may still be some mileage in seeing if its timing is more closely coincident with the shutter opening.
Top
Post Reply Previous topicNext topic
24 posts