My work took me traveling to the Waste Isolation Pilot Plant last month. This facility (known as WIPP) is operated in New Mexico by the US Department of Energy to dispose of TransUranic waste (in English, that mostly means Plutonium) from nuclear weapons production during the Cold War. The facility is basically a mine, located in a thick vein of rock salt 2500 feet underground. The salt is the remnants of an ancient sea from about 250 million years ago. The theory is that the salt proves that no groundwater has moved through this area for 250 million years, so there is no way for the waste to be spread around to become a hazard. When the site is finally closed, there are elaborate plans to mark the site as "off limits" to future generations that might want to drill or mine. As usual, Wikipedia has a good article here:

There are two main elevators into the mine. We entered through this one, intended both to move people down and up, and to bring excavated salt to the surface. It is VERY expensive to make a shaft larger when you are going down 2500 feet, so they have ingeniously minimized the shaft size by making this a two-story elevator! This photo shows the elevator on the surface and you can see people in both elevator chambers behind the screens. We rode jammed in belly-to-backbone and shoulder-to-shoulder down 2500 feet. I was told the ride took four minutes, though it didn't seem that long. 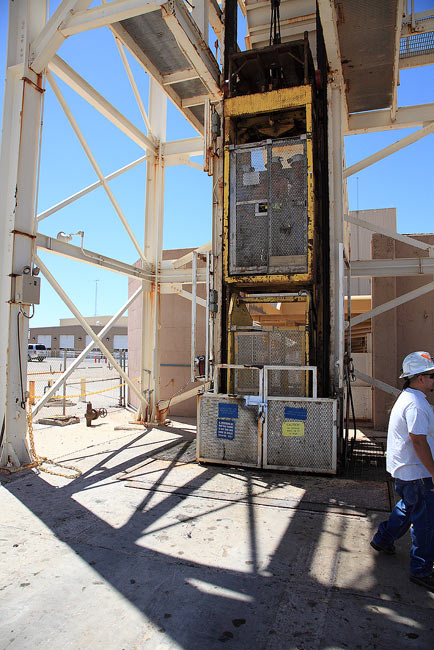 Once down in the mine, we rode around in a convoy of little electric golf carts. Temperature was very hot (I was told about 94 degrees F, though it didn't seem that high) in the mine, but humidity was only 1%!!!! I'm told that once they take equipment down, they never bring it up to the surface if they can possibly avoid it. The fine salt dust produced when they excavate new chambers gets onto everything, and metal equipment turns into a heap of dust when brought back to the relatively moist desert of the surface. I was concerned for my Canon 5D, but didn't do any lens changes in the mine. The mine was very well-ventilated and I wasn't around any excavation, so I'm hoping for the best! As you can see, they have lined the mine walls with chain-link fencing to minimize risk of chunks falling from the ceiling, and to at least give a fig leaf of protection from a major collapse. 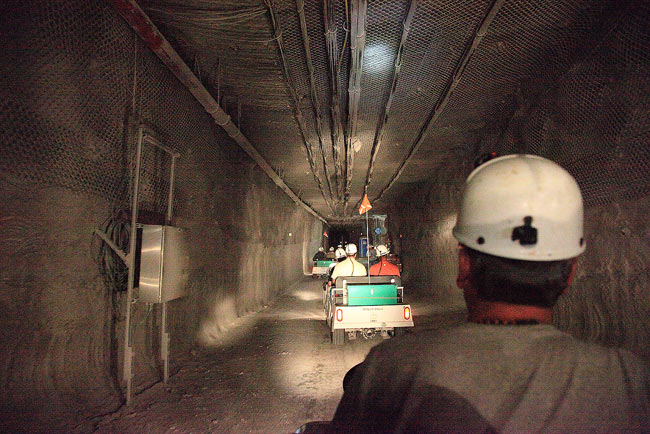 This is one of the drills used to excavate the mine galleries. It is about 18 inches in diameter. 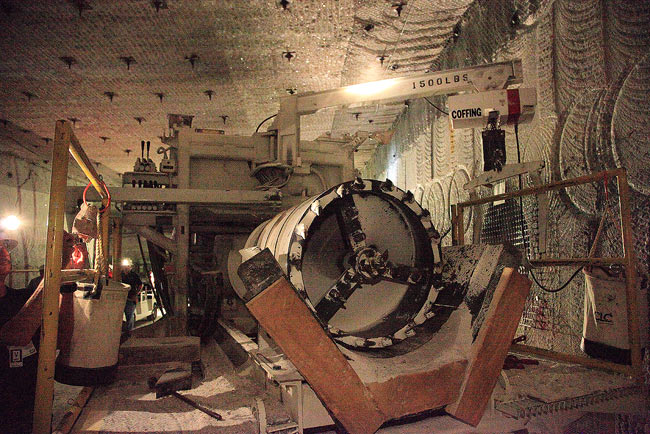 Riding back up, we took a larger elevator that is used to transport personnel, or take down waste (but never both on the same trip). Normally I'd consider this crowded, but it seemed positively luxurious after the ride down! I held my camera over my head and composed by guess and by God for this shot, and it turned out well. 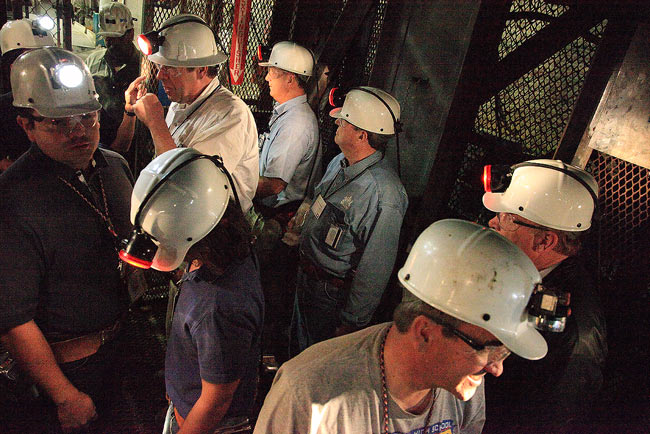 In the UK, anyone taking pictures of anything of this kind would almost certainly be arrested under anti-terrorist laws.

Harold Gough wrote:In the UK, anyone taking pictures of anything of this kind would almost certainly be arrested under anti-terrorist laws.


The facility is surprisingly open about what they do, presumably because that's the best way to dispel rumors and conspiracy theories. At the link below, the facility itself has posted pictures similar to mine:

Having said that, there were areas inside the facility where I had to leave my camera outside that particular place while we were inside. They even made people leave their cell phones that had cameras!

Despite mentioning Plutonium, there's not much at the place that would be of serious interest to terrorists. The overwhelming majority of the Plutonium waste is trace contamination on things like gloves used in the protective suit of someone handling the material.
Mike Broderick
Oklahoma City, OK, USA

Over here you can be arrested for photographing a public bus station!

Or a tube train:

Please direct any enquiries to the British Tourist Board or the British Embassy in your country.

Harold
My images are a medium for sharing some of my experiences: they are not me.
Top
Post Reply
4 posts • Page 1 of 1