When I left out for the highest peak east of the Mississippi this morning, I had no idea it would turn out to be one of the best trips I had made to Mt. Mitchell in quite some time.

Arriving at Mitchell rather early in the morning, the temperature was 56°F with a slight breeze and it was a “blue bird” kind of day, with abundant, golden sunshine. One could not ask for better conditions atop the mountain.

Grabbing a hot cup of coffee, I surveyed the area as I usually do, to decide just what route I wanted to take this day. There are miles upon miles of trails leading off the top of the mountain and most I am quite familiar with but there was one I had never been on but only for a scant hundred yards or so and then to turn around and come back. Mainly because that trail had a spiraling stone stair case descending or going ever downwards and at my age, I just did not feel up to it at the times that I was or had been there before. Not that I minded the descent, it was the coming back up that worried me. 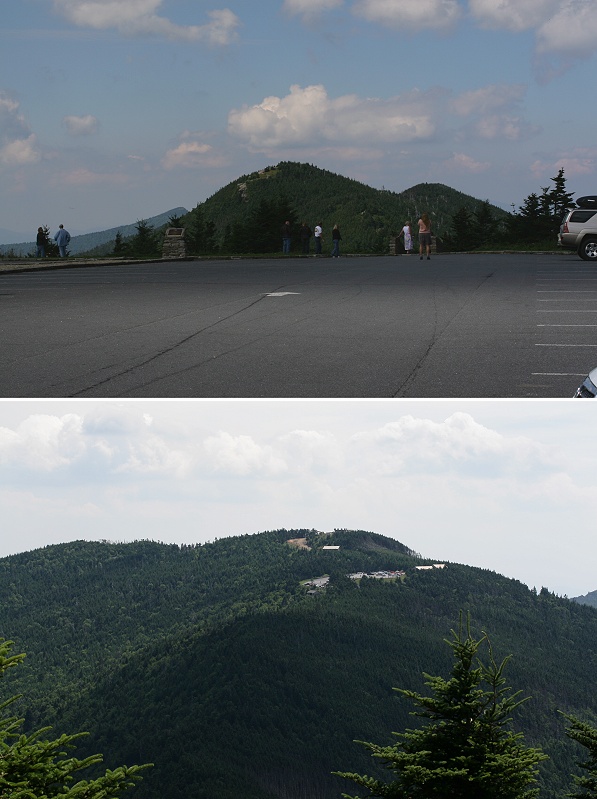 In these two images you are seeing before and after shots. The top image shows the destination looking from the parking lot of Mt. Mitchell, it is the second highest point east of the Mississippi that I am looking at here, Mt. Craig. Reminding you now, that this was not planned for this day and that spiraling stone stair case, going ever downwards, was about be a very unexpected pleasure to navigate.

Before I forget, the second image is that of what I seen looking back towards Mt. Mitchell going to Mt. Craig, somewhere along the trail. The ridgeline that the trail traverses, can be seen in the center of the second image. As one can see, I have already come a long way from Mitchell. 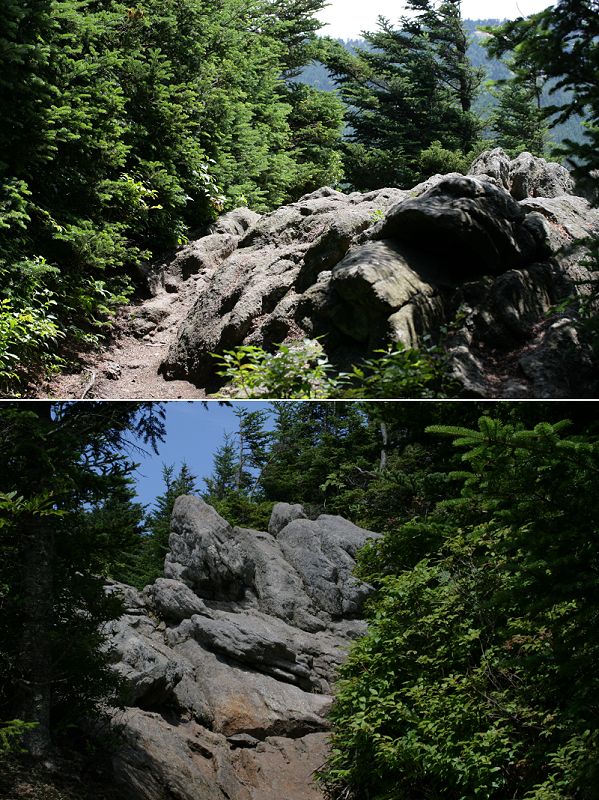 For the most part the trail was easy, too easy, I thought to myself but I forgot that I had one piece of equipment with me that would make the whole trip so much more enjoyable that I plan to take it again, as soon as possible and that piece of equipment was my camera.

As you can see in the two images above however, the trail was not all peaches and cream and pretty girl hikers smiling, waving and saying “hello.” After about a mile and a half. It turned in to stone out crops, bluffs, and narrow passages, that from the looks of them, one wanted to just turn around and go back but I did not and am glad that I didn’t.

There is something about a camera that makes one want to slow down and not be one of those point “A” to point “B” people that I meet along the trials, huffing and puffing, sweating all over the place and looking just down right miserable, for doing something that was intended to be an enjoyable and wonderful experience. Remember, “it is not the destination that is important but the journey itself.” So, the camera made me slow down, to navigate the spiraling stone stair case, there and back, with ease and to take note of all that nature had to offer me along the trail, as it spanned the ridgeline with magnificent vistas and a host of plant and insect life. Not to mention those pretty girl hikers that I never got the nerve to take photos of. 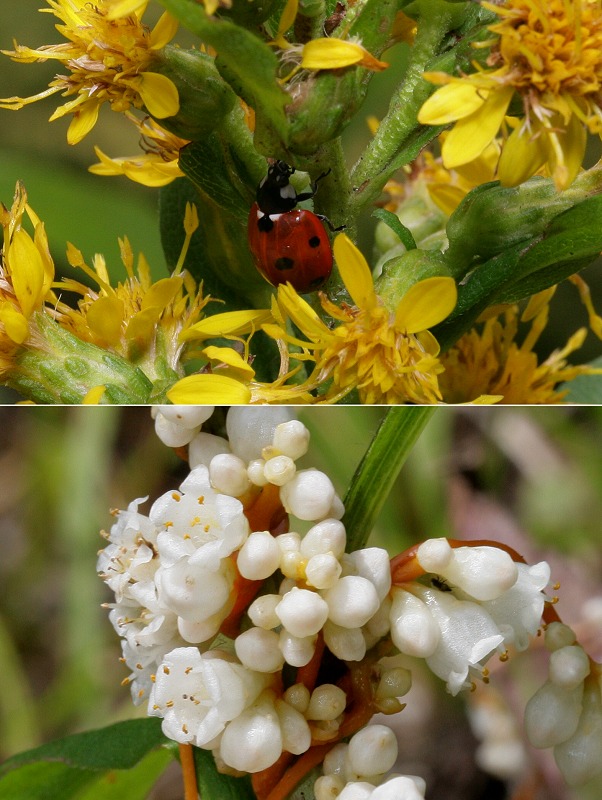 There is much more to this than I was prepared for and that was because I had intended to spend the day shooting macro and so that is the only two lenses that I brought with me, my 60 and 100mm f/2.8’s These images were all taken with the 60mm lens. As I mentioned this little jaunt was not in my plans and so I plan to return to Mt. Craig here in the next couple of weeks, maybe sooner and this time I will be toting my Sigma 24-70mm EX DG Macro or my Canon 28-135mm IS, maybe both, of which the two are all- rounders. I hope to show you more here in those up coming weeks, of the actual ascent on the mountain as the trail leaves the ridgeline and winds its way to the summit. The trail continues on from the summit however, to a camping area some 5 miles away, a trip that I would not be prepared to make and then have to turn around and make my way, all the way back to Mitchell, a 10 mile or more hike round trip, altogether. 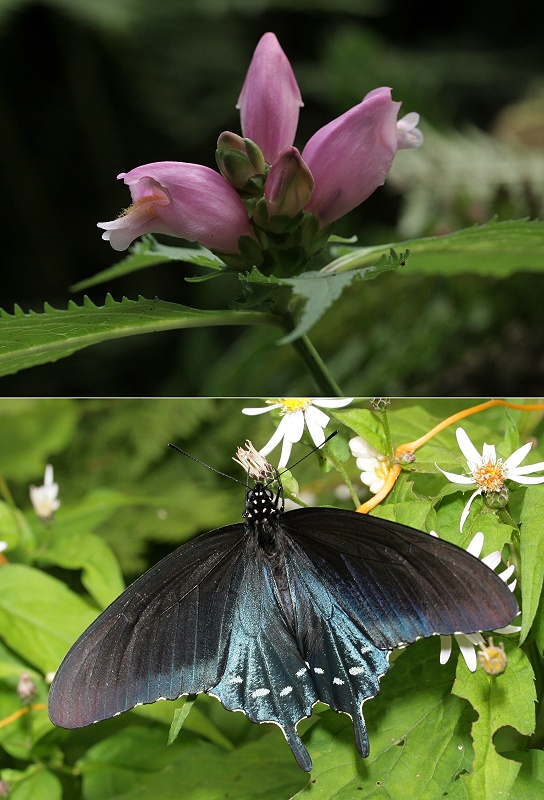 A much closer look at Mt. Craig, notice the outcropping of rocks to the left. There appear to be some “hot pixels,” one at the base of the first outcropping at the bottom and two more (top and bottom) of the second larger outcrop. Those are people climbing up the trail. From the top of the larger outcrop, the trail moves along into a “frying pan” shaped area of grassland or a “bald” as they are commonly called here and maybe elsewhere too. If you look closely at the bottom of the bald, you can barely see a grayish formation that appears somewhat triangular. This begins a series of log steps to help one to navigate the bald without getting into the grassy area. Most all of the plant-life at the bald is endangered and stiff fines and penalties can result if you are caught outside of those log boundaries. 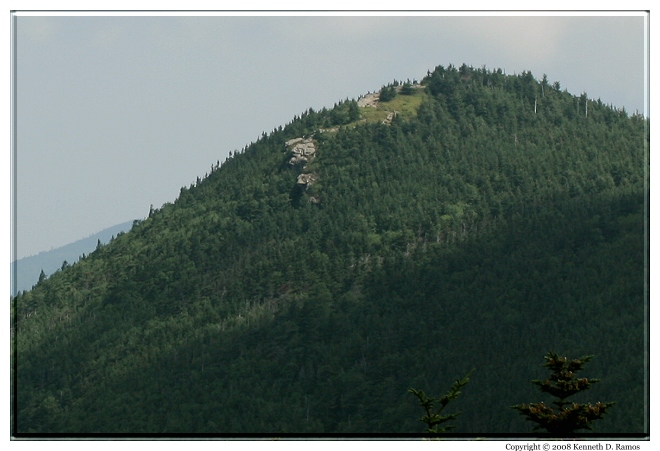 Once at the top though, you can sit down on the logs, relax, and enjoy the majestic view from the lofty peak. Here if you notice, the air seems to be quite clear but in the next images, a different story is told. 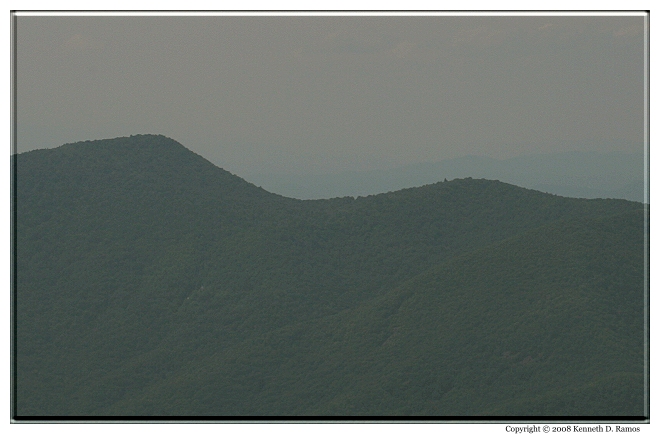 Presently there is a lawsuit, that has been filed by the State of North Carolina, against the State of Tennessee, for contributing to the pollution of our mountain environment at altitudes above 5,000 feet, though I do not know if there is one pending against the State of Ohio. These two states are major contributors to the pollution of our mountain air, from the coal fired plants in the Tennessee and Ohio valleys. I have tried to lighten these images but this is about the best I can do. A UV Haze filter was employed but as you can see, with little success. On an exceptionally clear day, one can see for what seems like forever. 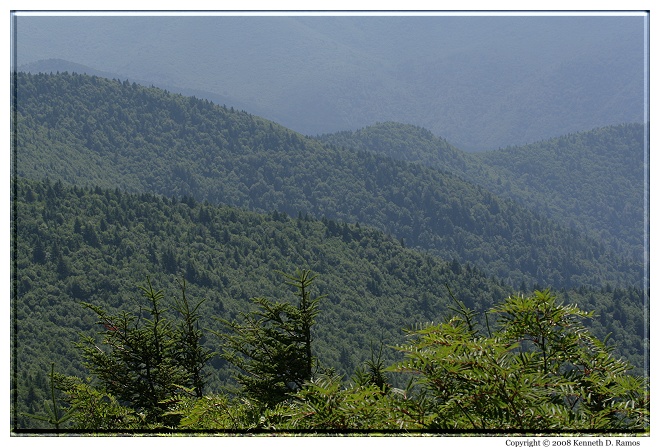 As clouds move in, bringing moisture with them, acid rain and fog are the result. Oftentimes the acid levels are so high, that they can burn the needles of the Spruce and Balsam Firs in the mountain range above 5,000 feet. Mainly these pollutants are nitric and sulfur oxides.
Top

Nice report there, Ken! Much appreciated. This landscape with its dark wooods reminds me a bit of our Schwarzwald (=Black Forest), somehow. Same problems with acid rain over here.

There appear to be some “hot pixels,” one at the base of the first outcropping at the bottom and two more (top and bottom) of the second larger outcrop. Those are people climbing up the trail.

I guess these hot pixels must have been "those pretty girl hikers that" you had encountered earlier but "never got the nerve to take photos of" you mentioned above.

But hey, you were lucky you didn´t, imagine what they would probably have done to your camera´s sensor at close range when even causing you pixels that hot from such a far distance.

I am planning on returning to the Blacks tomorrow morning early and this time I am taking my wide angle and a macro of course. Maybe this time we will get some pretty girls in here.