I have been using Litonotus's GUF/UGF (universal gradient filter) for a year and modifying it further. Here is a ready-to-print image containing many gradients that I made. If Litonotus or moderators are not ok with my post, please let me know and I will remove it quickly.

I mostly use those gradients located at the lower right hand corner of the jpeg image and stack 2-3 sheets together, per Litonotus' advice.

For those of you located in USA, you can easily and cheaply print the image on a letter-sized clear film at OfficeDepot (cost is around $1.5 per page - I suggest printing at least 6 sheets).

My experience with GUF is that, with high NA (>= 0.85), GUF has to block out any un-interfered light. Otherwise image would end up looking more like oblique than DIC (less blocking, less contrast). On my scopes, bigger and wider GUF produces a more DIC look, as more lens aperture is blocked/interfered.

Certain condenser with circular filter tray and bottom diffuser lens, such as that of LOMO Biolam or Zeiss Jena, would work better with bigger/wider GUF by having filter tray and diffuser lens removed and GUF attached via mounting putty (such that more aperture is blocked/interfered).

And here is two actual GUFs that I made using plain microscope slides, gradients and tapes. I use the narrower version for rectangular condenser filter tray and wider version for circular tray. 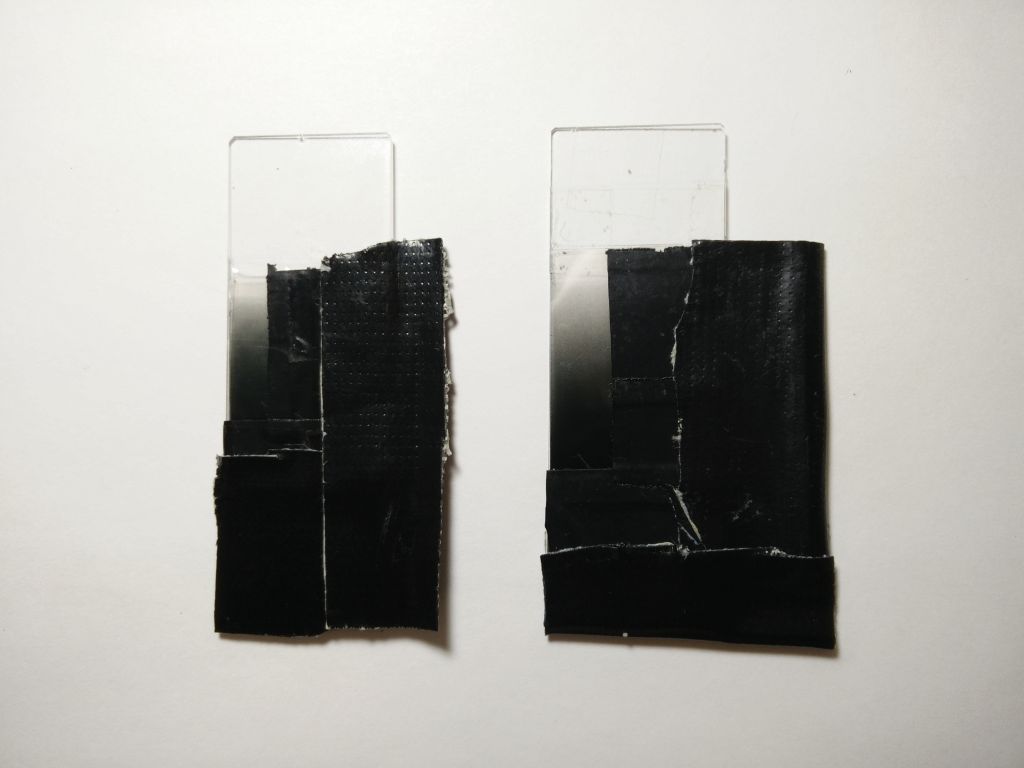 Have you got any posts where the gradient is being used with the object? Just curious..
Top

I have only published one photo shot with GUF:
http://www.photomacrography.net/forum/v ... ht=#165031

That photo was NOT a good representation of what GUF can do though. I did not focus my camera correctly in that photo and the GUF used there was my version #1. Also objective used there was an ordinary dry 60/0.85 without compensating eyepieces. And at 600x total magnification, the DIC effects are much less obvious than at 100x magnification. The original thread that Litonotus made contains much better images.

Now I am using GUF version #4 (basically a wider and longer version of the GUF shown in this thread) and water immersion 65/1.1 objective. Image quality is much better. I have not got time to take a better photo though.

And pease do try it, as printing your own GUF takes less than $10 - for me, that was the best $10 I have ever spent - I would not regret it even if I paid $100 for it. If your subjects do not need over 400x magnification, GUF should be very easy to use.

The keys of using GUF are:

1) make sure that the GUF covers the ENTIRE aperture of your objective's back lens - you need to take off the eyepiece to take a careful peek;

2) condenser aperture should be fully open when GUF is used.

Good to know that, to be honest I did not know something like this existed. When I've got time it will be nice for experimenting.

I think most people (or most condenser trays) only need the following lengths of gradients. I made the following template for easier and cheaper printing: 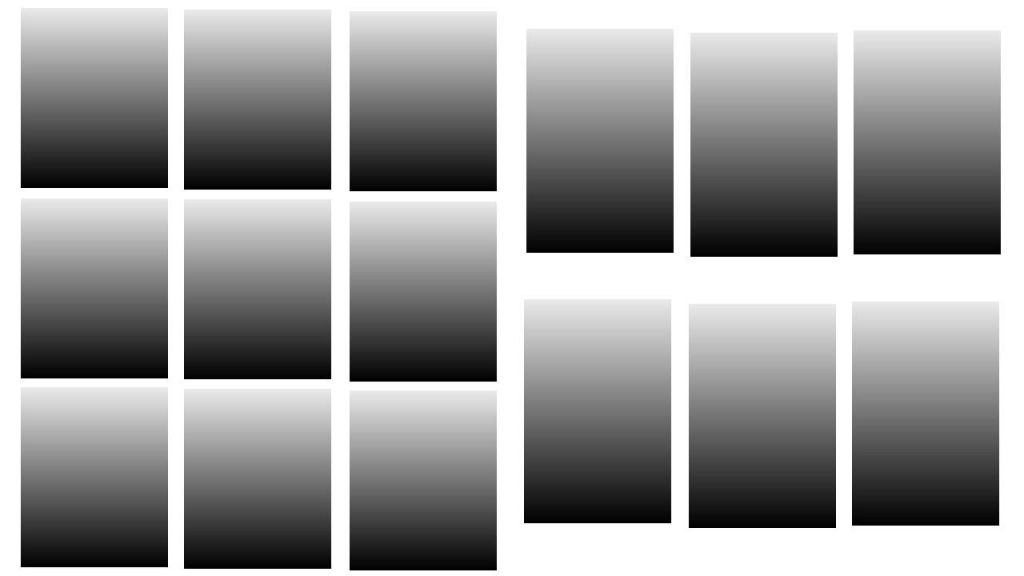 Edit: any printer will work. The following printable projector film/sheets should work. I will order some to try next time:

I was asked how I placed my GUF filter. So here it goes.

The following is a LOMO Abbe condenser in its stock unmodified form, with filter tray and bottom diffuser lens attached: 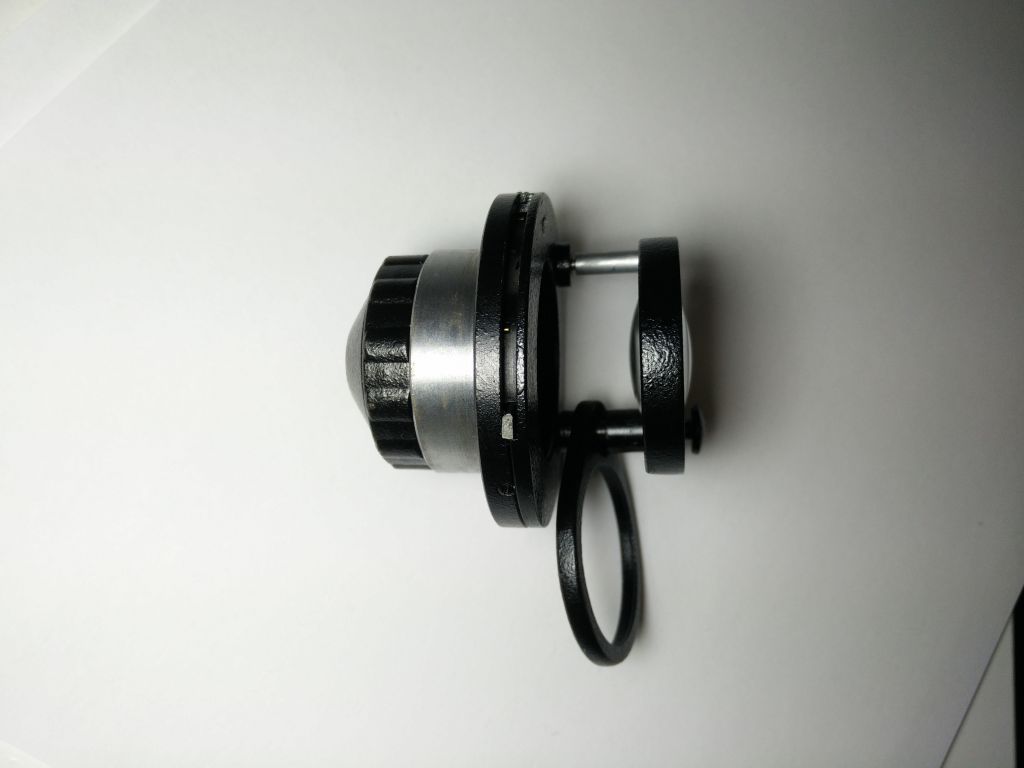 Then I removed the filter tray and diffuser lens to make room for my filter. In the following photo, you can see how I sticked on some putty to attach the GUF. Note that in this photo, GUF does NOT cover the aperture completely and it is NOT placed optimally (I did that on purpose, so you can compare this to a better placement shown next): 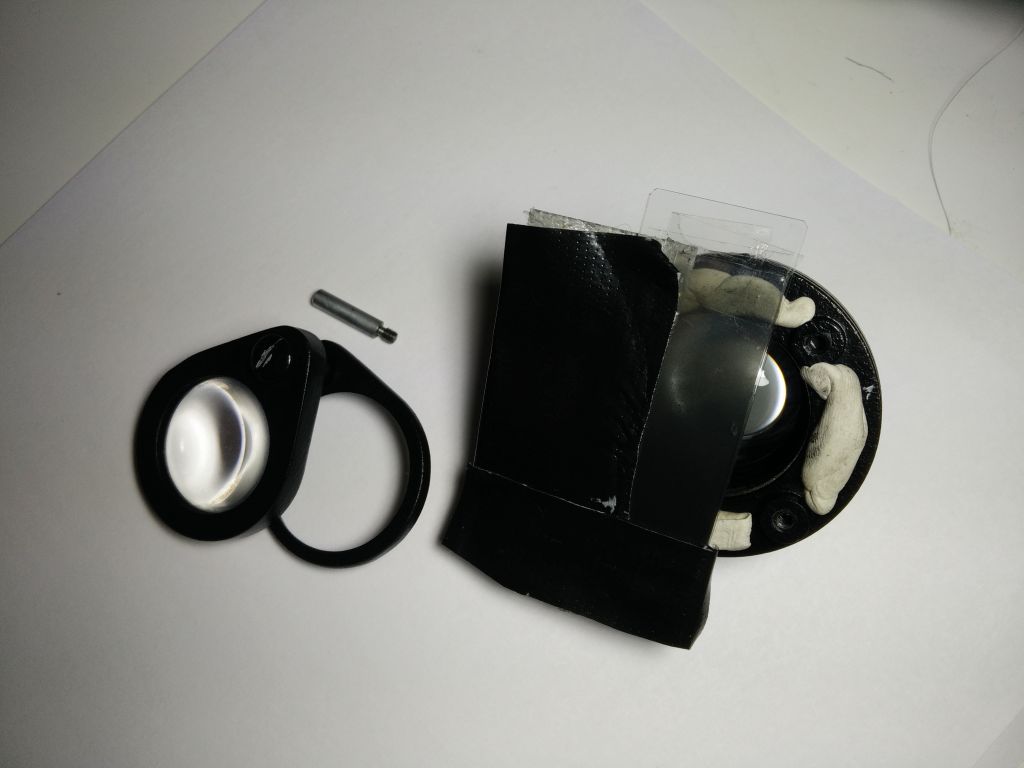 The following two photos show the optimal placement of GUF blocking the ENTIRE aperture of condenser: 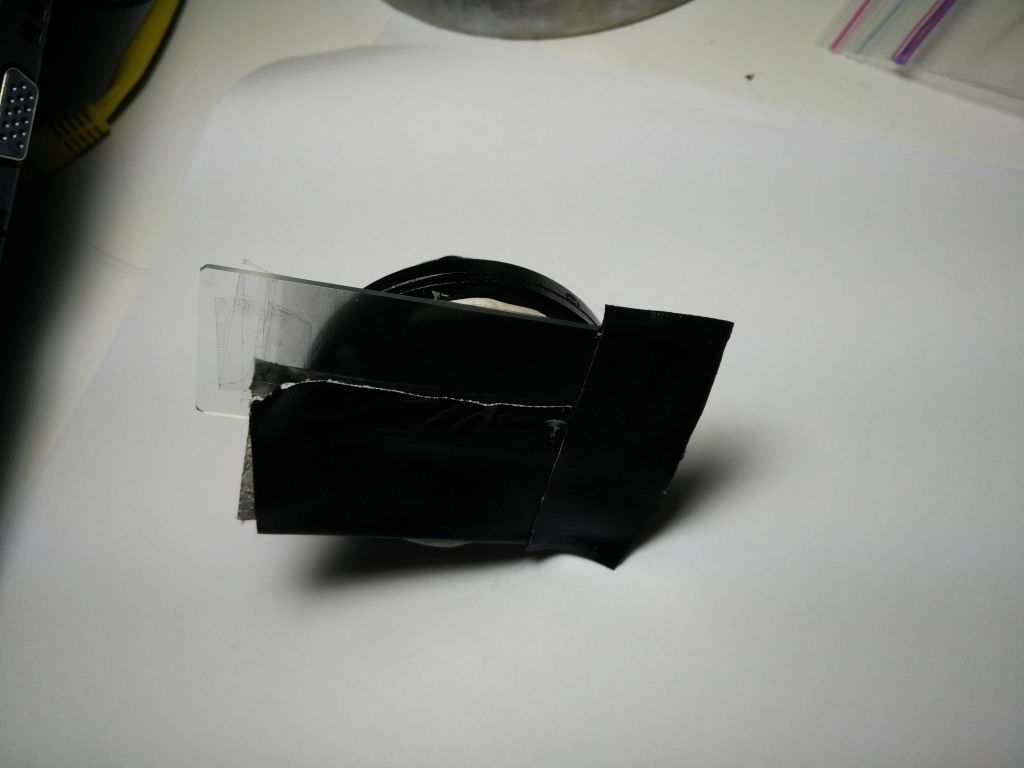 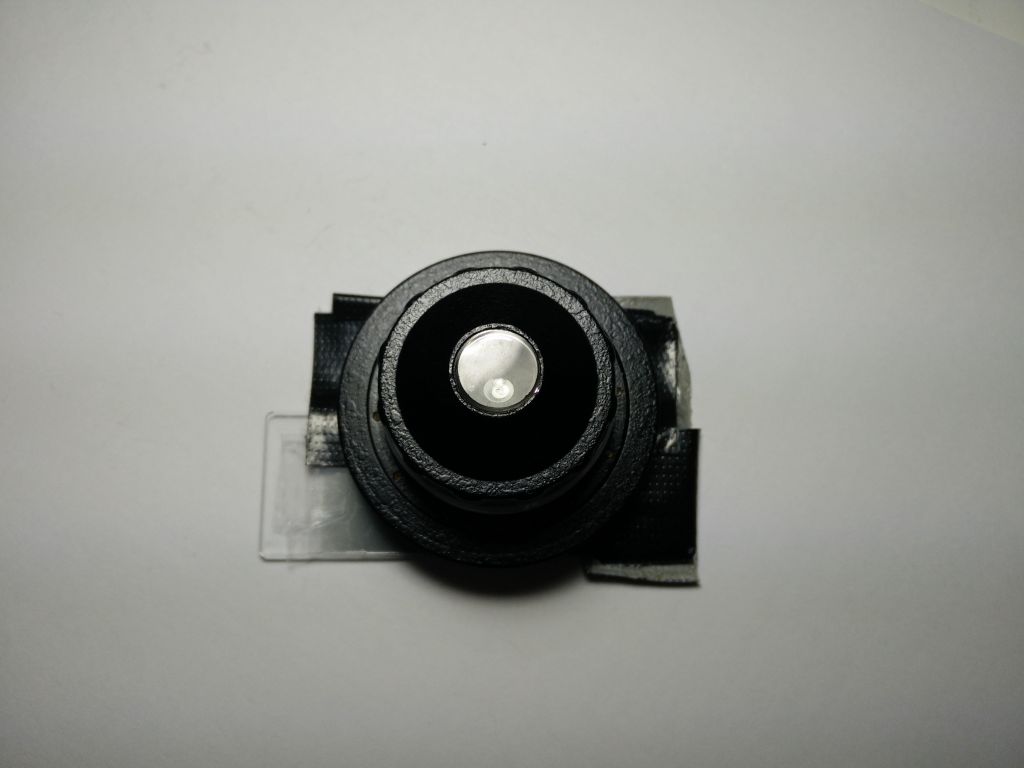 The condenser is then ready to go back to where it was.

What you should see from the back lens of objective (once you peek into an empty eye tube with eyepiece removed) has been shown in post #6 of this thread: http://www.photomacrography.net/forum/v ... hp?t=15142

If you want to have optimal GUF performance for objective >= 40x though, there are things which you may improve upon. Looking at that post#6 of the above cited thread, you can see:

1) gradient can be more even/smoother than it was then, because in that photo you can see minor separation of white portion from dark portion (with a better gradient you should not see separation or bands, you should see continuous gradient from light grey to dark grey to black);

2) at the 9 o'clock positions of the bottom two circles shown in that post #6, you can see minor light leakage. That leakage may produce an image that looks more like oblique than one that looks like DIC, especially when a bigger aperture (high NA, high magnification) objective is used.
Selling my Canon FD 200mm F/2.8 lens
Top

Thank you very much for sharing this filters.
I printed one sheet and gives surprisingly good results at the first attempt!
Top

In my experience, if you provide enough light, the best effect seem to appear right BEFORE the darkfield appears, if you slide in the contrast part more and more.

The uGF/GUF filter takes away lots of light though, so if you cannot provide enough light, sometimes image will look grainy and uneven in terms of lighting.

I actually have to use LED with 800-1000 lumen output (Cree XM-L2 or T6) and/or monocular head sometimes, especially for video with UGF/GUF. With just still photos, eletronic flash should provide enough light, if you can incorporate it to your scope's light train.
Selling my Canon FD 200mm F/2.8 lens
Top

GUF is discussed in a bunch of different threads but I thought that it was best to put this here where zzffnn has already so kindly posted GUF templates.

I realized yesterday that Powerpoint was really good for making GUF gradients.

You can create a number of boxes of different sizes, select as many as you like, and adjust the gradient properties for all of them at the same time. When I liked the range of "steepnesses" of the gradients, I could select the entire set, make a copy, and pick another color for the duplicate set. Easy!

The settings looks like this in my version of powerpoint: 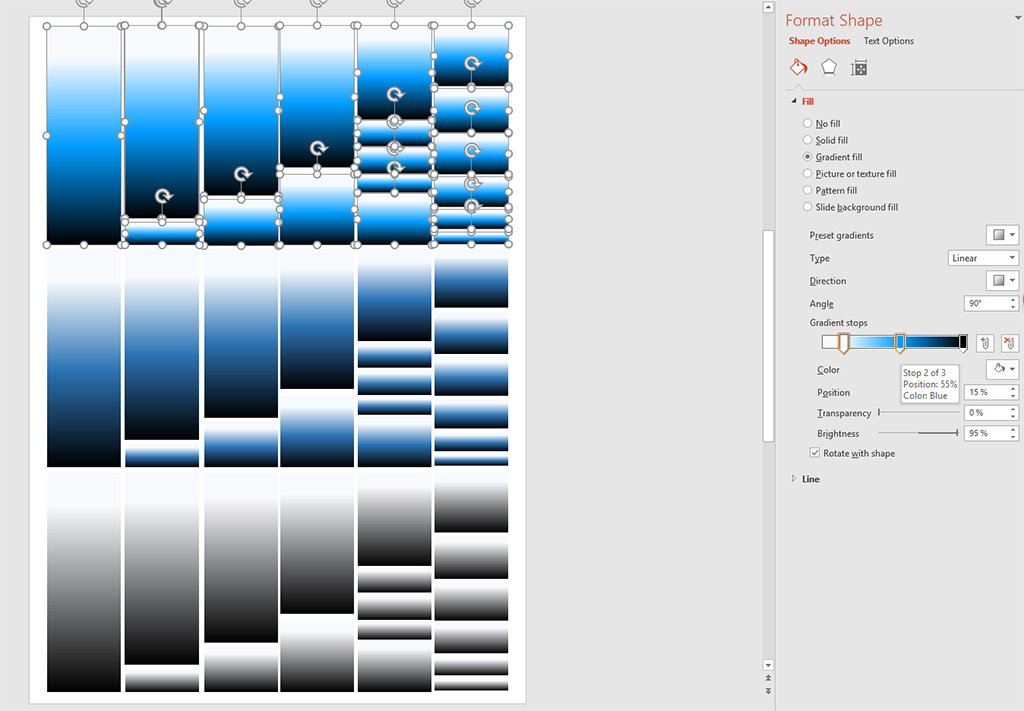 Here's a link for the powerpoint file if anyone is interested in tweaking the parameters:

Haven't started playing with it under my microscope yet so I don't know if the different colors works well. Actually, I kind of messed up the printing and created a paper jam (plastic jam?) in the printer. The plastic sheets were severely wrinkled and the color didn't stick properly, but I could rescue enough usable gradients to get started.
Top
Post Reply Previous topicNext topic
9 posts • Page 1 of 1